The following two letters were sent from Robert Dickinson’s stepmother to Denis Crooks’ mother when the two sons were overseas during the war.

Leslie and Nellie had a son together, Len Dickinson. Letters and cards Robert sent while in service to his little brother Len are posted elsewhere on this site.

Thanks to Denis’ daughter, Maggie Clarke, for sharing this material.

END_OF_DOCUMENT_TOKEN_TO_BE_REPLACED

Pictured above are Robert Dickinson (left) and Denis Crooks.

The 12 letters in this post were sent to me by Maggie Clarke, Denis Crook’s daughter.

Ten of the letters were among those Denis sent to his parents while he was interned at Camp 59–Servigliano. The final two were written in Camp 53–Sforzacosta. The letters are a testament to the deep friendship between Denis and fellow prisoner Robert Dickinson, who is mentioned in each of the letters.

The two men were, as Denis put it, “best of chums” from January 1942 to May 1943. When Robert was transferred from Camp 53, it would be the last time the two men would see each other, as Robert did not return from the war.

In addition to reports of what Denis and Robert were up to, the letters provide a wealth of information about daily life in camp—invention and refinement of the “blowers” the men used to warm food, the concoctions that they created from Red Cross parcel contents (see also “Robert Dickinson’s ‘Campo 59 Cookery'”), and details of a camp-sponsored “grand carnival” (see also “Carnival Time”). 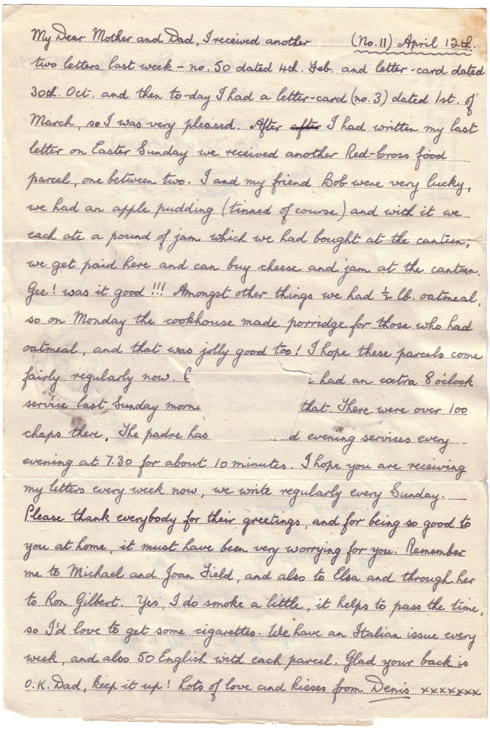 Dear Mother and Dad,
I received another two letters last week—no. 50 dated 4th. Feb. and letter-card dated 30th. Oct. and then today I had a letter-card (no. 3) dated 1st. of March, so I was very pleased. After I had written my last letter on Easter Sunday we received another Red-Cross food parcel, one between two. I and my friend Bob were very lucky, we had an apple pudding (tinned of course) and with it we each ate a pound of jam which we had bought at the canteen; we get paid here and can buy cheese and jam at the canteen. Gee! was it good!!! Amongst other things we had ½ lb. oatmeal, so on Monday the cookhouse made porridge for those who had oatmeal, and that was jolly good too. I hope these parcels come fairly regularly now. [missing text] had an extra 8 o’clock service last Sunday morn… [missing text] that. There were over 100 chaps there. The padre has [text missing] evening services every evening at 7:30 for about 10 minutes. I hope you are receiving my letters every week now, we write regularly every Sunday. Please thank everybody for their greetings, and for being so good to you at home, it must have been very worrying for you. Remember me to Michael and Joan Field, and also to Elsa and through her to Ron Gilbert. Yes, I do smoke a little, it helps to pass the time, so I’d love to get some cigarettes. We have an Italian issue every week, and also 50 English with each parcel. Glad your back is O.K. Dad, keep it up! Lot of love and kisses from Denis xxxxxxx

END_OF_DOCUMENT_TOKEN_TO_BE_REPLACED

These delightfully sensitive portraits of fellow prisoners are believed to have been taken in Camp 59 by Denis Crooks. Denis’ daughter, Maggie Clarke, found the photos among his papers after Denis passed away.

Unfortunately, we do not know the identities of these fellows, but their personalities shine brightly through these photographs. 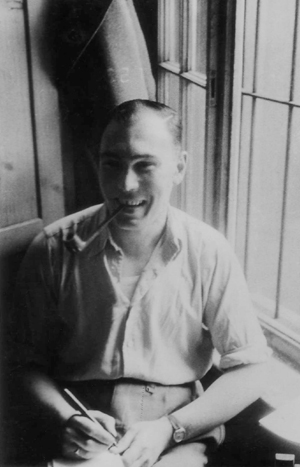 END_OF_DOCUMENT_TOKEN_TO_BE_REPLACED

The photos in this post are from Maggie Clarke, daughter of Camp 59 British prisoner Denis Crooks.

Maggie explains, “We didn’t find his suitcase full of these letters until after he died nine years ago. We also have some photos which he took of camp life, although as he said, he would have been shot if he had been caught! He must have got to a point where he didn’t care.”

She continues, that the photos “aren’t of brilliant quality as he somehow had them developed in camp! I seem to remember he mentioned bribing one of the guards! Mind you, by reading of some of the inventions he and Bob made, they probably made their own dark-room!”

END_OF_DOCUMENT_TOKEN_TO_BE_REPLACED

Maggie writes that this letter, “…is a bit of a mystery to us. It was included in with Dad’s letters, but is from someone called Eric who addressed the letter to ‘My dear Folks’ and signed it ‘Your loving son, Eric’. The letter is typed, which I would think is quite unusual but it looks quite old.

“It’s quite a sad story and I would love to find out more, but no idea where to start. As you will see, the letter is dated October 1943 which is when Dad was moved to Stalag IVG in Germany. I’m looking through the letters again to see if I can find any reference to any of the men mentioned, but no luck so far.”

Although the description of the post-armistice camp evacuation matches accounts from other prisoners, the date Eric gives of the escape is the night of September 12, whereas the actual date of the escape from Camp 59 was September 14. It may be that he simply got the date wrong. That Ron and Eric made it to the Allied lines in a little more than one month is impressive.

END_OF_DOCUMENT_TOKEN_TO_BE_REPLACED

This article about Allied prisoners of war was clipped and saved by ex-POW Denis Crooks. Denis’ daughter Maggie Clarke kindly shared it for this site.

Unfortunately, we do not know which newspaper the article is from or the date it was published, although the reference to the fall of Mussolini (July 1943) is helpful in dating it.

Some hundreds of names have recently been received of prisoners who have arrived in Germany from Italy. Sir James Grigg, the War Minister, said in Parliament today.

It seemed clear that large numbers of such notifications would be received in due course, but he did not know how many.

Sir James, who was replying to Wing Commander Hulbert (Con. Stockport), said there had always been some movement to Germany of prisoners captured in North Africa and more recently in Sicily.

In some cases they were held for a time in transit camps in Italy [and] 2400 prisoners were transferred from Italian camps other than transit camps shortly before the fall of Mussolini.

“A number of British prisoners of war have escaped from Italy to Switzerland and others have reached the Allied lines in the south.” he added. “The next of kin of these prisoners are being informed as soon as names are received.

“Some prisoners may still be at large elsewhere in the country. The protecting Power is doing what is possible to obtain information about our prisoners and to safeguard their interests.

“It is extremely important not to say anything which interferes with the prospects of the final escape of those still at large.”

This photograph was one of several that we believe Denis Crooks took while away during the war.

Denis’ daughter, Maggie Clarke, has shared several photos he took in Camp 59 with me—which I will share here in upcoming posts.

I first assumed this photo was taken within the camp. It appears to be the inside of a storage tent, with bundles of blankets or clothing and a few mess kit items atop wooden stools.

On closer examination, there appears to be at least one rifle propped against the center post. An unattended rifle in a prison camp storage tent seems unlikely. Did Denis take this in North Africa before he was captured?

At any rate, there is something beautiful—and a bit haunting—about this intriguing image.

The following letter was the first one received by Denis Crook’s parents after his capture. Thanks to Maggie Clarke for sharing this letter and the notifications in the previous post.

My Dear Mother and Dad,

I expect by the time you get this letter you will have heard that we are “in the soup”—and thick soup at that! But there’s absolutely no need to worry as I am quite fit and well and so far the life isn’t too bad. We are getting enough food and water and we still have blanket and greatcoat for night-time, so we aren’t badly off. So don’t worry at all as I’m quite OK.

There’s one thing though, and that is the question of underclothes, etc. I lost practically everything when we surrendered and I could do with plenty of shirts, pants, vests, socks, etc. Also of course anything in the way of eats!! I don’t know how long it will take for letters and parcels to reach here from England, but you could send unperishable food, especially of the “filling” variety! Anyway, I think you know my stomach sufficiently well to guess what it needs!! Also any washing gear.

END_OF_DOCUMENT_TOKEN_TO_BE_REPLACED

This notice sent to Denis Crook’s parents from the Army Signal Corps records office in Reeding—dated April 30, 1941—announced that Denis had been missing in action since April 8.