1. Having escaped from enemy territory, the following named enlisted men, formerly assigned to organizations indicated, will proceed on or about 3 November 1943, to Casablanca, Morocco, reporting to the Port Commandant for return to the United States by first available surface transportation. Upon arrival in the United States, they will report to the Commanding General, Port of Embarkation, who will assign them to a reception center near their home and will report their assignment to The Adjunct General, Washington, D.C.:

2. Each is granted a furlough of twenty (20) days effective after arrival in the United States and before proceeding to permanent station.

3. Travel by belligerent vessel, commercial steamship, army transport, naval vessel and/or rail is authorized. Travel by military aircraft from this station to Casablanca, Morocco, is authorized. Rations in kind will be provided.

By command of General EISENHOWER:

This second transfer order is provided by Alan Rosenblum. The men listed on the order include his father, Staff Sergeant Albert Rosenblum.

Of the 26 men listed in this transfer document, 10 are identified in the U.S. National Archives database of WW II prisoners as having escaped from Camp 59.

Thirteen of the 26 are listed as former prisoners in the database, but no camp is listed for them. Of those 13, two—John E. Riley and Glen E. Backe—are listed in Luther Shield’s “Dual Purpose Deck of Cards.” (In Luther’s deck, Backe is listed as Glenn S. Backe.) Since Luther escaped from Camp 59 and was not recaptured, it is likely these men were recorded on his playing cards while they were in Camp 59. 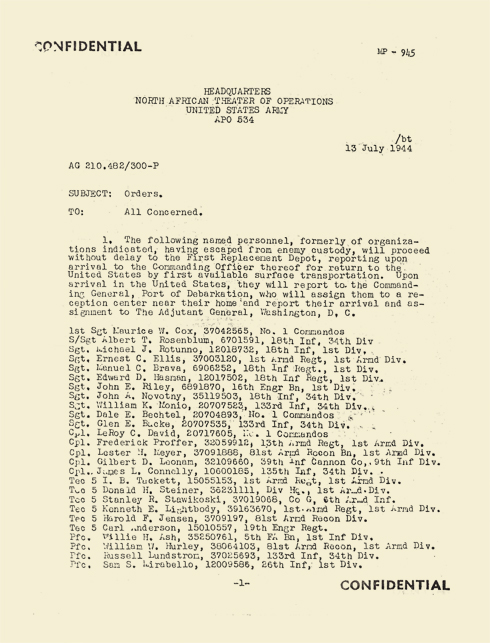 SUBJECT: Orders.
To: All Concerned.

1. The following named personnel, formerly of organizations indicated, having escaped from enemy custody, will proceed without delay to the First Replacement Depot, reporting upon arrival to the Commanding Officer thereof for return to the United States by first available surface transportation. Upon arrival in the United States, they will report to the Commanding General, Port of Debarkation, who will assign them to a reception center near their home and report their arrival and assignment to The Adjutant General, Washington, D. C.