Maggie writes that this letter, “…is a bit of a mystery to us. It was included in with Dad’s letters, but is from someone called Eric who addressed the letter to ‘My dear Folks’ and signed it ‘Your loving son, Eric’. The letter is typed, which I would think is quite unusual but it looks quite old.

“It’s quite a sad story and I would love to find out more, but no idea where to start. As you will see, the letter is dated October 1943 which is when Dad was moved to Stalag IVG in Germany. I’m looking through the letters again to see if I can find any reference to any of the men mentioned, but no luck so far.”

Although the description of the post-armistice camp evacuation matches accounts from other prisoners, the date Eric gives of the escape is the night of September 12, whereas the actual date of the escape from Camp 59 was September 14. It may be that he simply got the date wrong. That Ron and Eric made it to the Allied lines in a little more than one month is impressive. 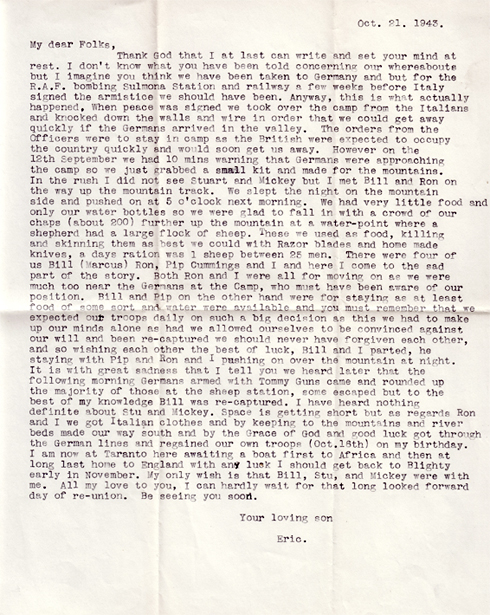 Thank God that I at last can write and set your mind at rest. I don’t know what you have been told concerning our whereabouts but I imagine you think we have been taken to Germany and but for the R.A.F. bombing Sulmona Station and railway a few weeks before Italy signed the armistice we should have been. Anyway, this is what actually happened. When peace was signed we took over the camp from the Italians and knocked down the walls and wire in order that we could get away quickly if the Germans arrived in the valley. The orders from the Officers were to stay in the camp as the British were expected to occupy the country quickly and would soon get us away. However on the 12th September we had 10 mins warning that Germans were approaching the camp and so we just grabbed a small kit and made for the mountains. In the rush I did not see Stuart and Mickey but I met Bill and Ron on the way up the mountain track. We slept the night on the mountain side and pushed on at 5 o’clock next morning. We had very little food and only our water bottles so we were glad to fall in with a crowd of our chaps (about 200) further up the mountain at a water-point where a shepherd had a large flock of sheep. These we used as food, killing and skinning them as best we could with Razor blades and home made knives, a days ration was 1 sheep between 25 men. There were four of us Bill (Marcus) Ron, Pip Cummings and I and here I come to the sad part of the story. Both Ron and I were all for moving on as we were much too near the Germans at the Camp, who must have been aware of our position. Bill and Pip on the other hand were for staying as at least food of some sort and water were available and you must remember that we expected our troops daily on such as big decision as this we had to make up our minds alone as had we allowed ourselves to be convinced against our will and been re-captured we should never have forgiven each other, and so wishing each other the best of luck, Bill and I parted, he staying with Pip and Ron and I pushing on over the mountain at night. It is with great sadness that I tell you we heard later that the following morning Germans armed with Tommy Guns came and rounded up the majority of those at the sheep station, some escaped but to the best of my knowledge Bill was re-captured. I have not heard anything definite about Stu and Mickey. Space is getting short, but as regards Ron and I we got Italian clothes and by keeping to the mountains and river beds made our way south and by the Grace of God and good luck got through the German lines and regained our own troops (Oct. 16th) on my birthday. I am now at Taranto here awaiting a board first to Africa and then at long last home to England with any luck I should get back to Blighty early in November. My own wish is that Bill, Stu, and Mickey were with me. All my love to you, I can hardly wait for that long looked forward day of re-union. Be seeing you soon.