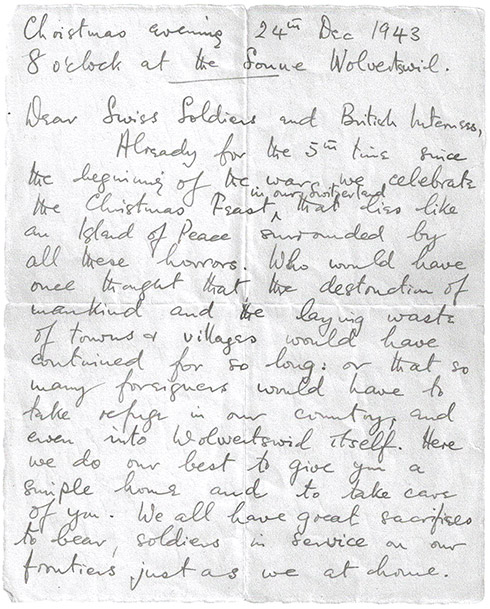 The following address from among Stanley Thomas Dunn’s papers from the war appears to be remarks given before a Christmas evening dinner at the Sonne Wolfertswil—the Sonne Restaurant—in Flawil, a municipality in the canton of St. Gallen, Switzerland.

Already for the 5th time since the beginning of the war we celebrate the Christmas Feast in our Switzerland that lies like an Island of Peace surrounded by all these horrors. Who would have once thought that the destruction of mankind and the laying waste of towns & villages would have continued for so long; or that so many foreigners would have to take refuge in our country, and even into Wolvertswid itself. Here we do our best to give you a simple home and to take care of you. We all have great sacrifices to bear, soldiers in service on our frontiers just as we have at home.

Your thoughts will naturally be at home with your dear ones; your fathers, mothers & sweethearts and children which we quite understand. When will they see you again and embrace you with the desire “For no more war in all the world.” So let us celebrate Christmas in my family circle simply & modestly. This little celebration will bring us nearer to one another until the star of peace shines brighter and you will be at your own fireside. We hope and pray that this desire will bring the reality “Peace be unto men of good will”.

So only take courage brothers; tomorrow cares and troubles will be swept away and the sun will shine again on our native land. Above all we thank you especially for your excellent behavior and chivalry.

We wish you luck and a very Merry Christmas.

from Loser Hofstetter his family and children.

END_OF_DOCUMENT_TOKEN_TO_BE_REPLACED 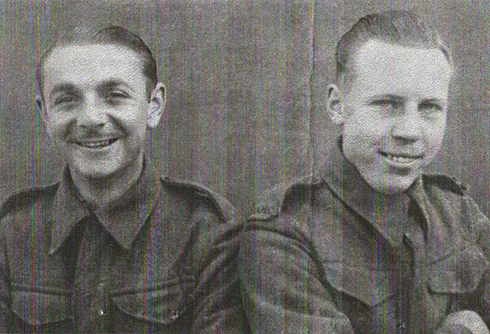 My friend Anne Copley met Vanda Jessopp and her husband Peter last November at the 2017 Fontanellato–Monte San Martino Trust Luncheon in London. They have since exchanged information about Vanda’s father, Stanley Dunn, that they are allowing me to share here.

Here is the apparent chronology of his internments:

From Africa, Stanley was transported to Sicily (where the POWs built a road). From Sicily he was sent to Servigliano (P.G. 59), then Fontanellato (P.G. 49), and finally Sforzesca (P.G. 146/18). He escaped from Sforzesca and in time was able to make his way to Switzerland, where he lived in Camp d’Eoades in Arosa, Switzerland, until his repatriation.

It’s somewhat of a mystery why Stanley would have been sent from Servigliano, which was an “other ranks” camp to Fontanellato, which was an officers’ camp before being transferred to Sforzesca.

After his escape in Italy, Stanley was helped by Eric Newby’s wife-to-be Wanda Skof.

British travel writer Eric Newby, who during the Second World War served in the Black Watch and Special Boat Section, was captured in August 1942. He escaped from Fontanellato POW camp after the Italian Armistice and was befriended by Wanda Skof, a Slovenian woman living with her family nearby. Eric married Wanda after the war.