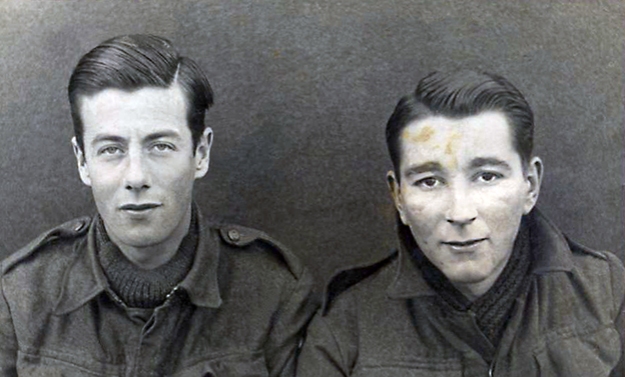 This photo of British gunner Ronald McCurdy (left) and a fellow prisoner, who we believe is his friend Percy, was sent in a letter from P.G. 59 to Ronald's parents.

An address on the back of the photo bears the numbers 14/48.

Occasionally, the return address on a postcard from P.G. 59 will include a hut number. In this case, I believe the numbers 14/48 refer to Hut 14, Section 48.

Another example of referring to huts and sections—and even bed numbers—is in “Douglas Allum’s Camp 59 Prisoner List.”

Ronald’s daughter, Rona Crane, explains, “My Father was born and brought up in North Wales. Chester is not far over the Wales/England border.

“My Grandparents moved to Chester just before the war due, I think, to my Grandfather’s work. They returned to North Wales after the war.

“I now live in South West Wales due to my Husband being originally from the area.”

Rona shared what she knows about Ronald’s POW experience:

“My Father escaped and got to Switzerland, where he was housed in a hotel and then sent home.

“When he escaped he went with a few others, but they were tracked by the Germans with dogs. He and his friend got away by getting into a river, and the others got split up and I think were either captured or shot.