Penny wrote, “I have a photograph of my aunt with her charges (she was a childrens’ nurse) sent to my father with the following on the back:

“There is no record of him on your site so I take it you were not aware of his having been a prisoner.

“Unfortunately, although I knew he had been a prisoner it was never discussed. However, I was aware that he escaped. I have no idea how he returned to the UK. If you have any information or could point me in any direction where I might find more details I would be most grateful.

“I have attached a photograph of my father which he sent to my grandmother at 18 Cambridge Gardens, London NW6. I assumed it was taken in a camp. However, as he enlisted on 22nd April 1938 (my sister has his army pay book) this may well have been taken at an army camp in the UK. According to the book he was demobbed on 17th March 1946. Presumably he was not sent back abroad following his debriefing in 1944? Again according to the book he was a ‘driver/mechanic of considerable ability’.”

I wrote to Penny that it seems to me most likely the photo of her father standing before a very tall pile of snow was taken in Switzerland during his winter there. The photo is similar to photos on other posts on this site of escapees in Swiss communities during the winter of 1943–44—all looking rather cheerful and surrounded by abundant snow. 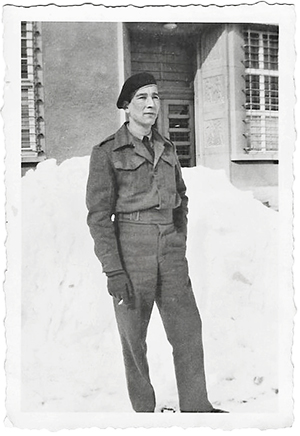 In answer to how and when John might have returned home, a 1944 newspaper report on the return of Leslie “Jack” Young offers a likely scenario:

“The American invasion of Southern France, says Trooper Young, gave them all renewed hope of getting home. Travelling via Geneva, Marseilles and Naples, spending a short time at a rest camp on the Salerno beach-head, they eventually docked at a Northern port in England, welcomed by a military band.”

Regarding John’s background, Penny wrote, “My father was born on 10th April 1920 at 64 Priory Road, Hampstead, London and my grandparents lived in London.

“As a side issue, my paternal grandfather was a German Jewish immigrant who served in WWI (I have found a record of him on a military website) under their original German name of Schwabacher. My father was baptised with that name, but confirmed under the name of Shaw in 1934, so the name was changed at some point during that time. I have tried to find the entry in the London Gazette without success so far. By this time the family was living at 18 Cambridge Gardens. He had an older sister, Diana, who died about 10 years ago.

“He married my mother, Bessie Bellas, on 23rd February 1946 at St. John the Evangelist Church, Kilburn, London and they lived in London until some time in 1948–49. At the time of the marriage my father was a bank clerk. I was born in Melton Mowbray, Leicestershire in July 1949. We moved to Lincolnshire in mid–1950. I have a younger sister, Lynn, who was born in 1952 and a brother, Martin, who was born in 1960.”

In response to Penny’s e-maiI, I contacted researcher Brian Sims to ask whether he could help with access to John’s military records at the National Archives.

He in turn kindly shared this information from John’s repatriation papers:

Place and date of capture: Agedabia [or Ajdabiya, in northeastern Libya], December 30, 1941

“During a tank action the turrent of my tank was hit killing the tank Comd. [commander] and seriously wounding the wireless op. [wireless operator] In an attempt to withdraw we were again hit, the tank being completely disabled. We were unable to reach another tank and were finally captured by a German patrol.”

“In the morning of the 10.9.43 the Italians opened the gates, freeing the whole camp. I spent 2 months with 2 separate families in the vicinity of the camp. After this time I was offered guidance to the Swiss Frontier which I accepted. The journey was undertaken partly by rail, Bicycle, and foot, (names of places unknown) until we reached the Swiss frontier at Arzo.”

Help was given to John while in Italy by:

Type of help given: food, shelter, and clothing for one month

Type of help given: food, shelter, and clothing for one month

On the details of John’s final escape, Brian wrote to me, “Vigevano had several agricultural work details in the general area, so naturally many of the POWs working in them would have Italian contacts. These would include the farmers they worked for. A work camp sometimes had the manpower split and the men worked a few miles from each other, even though they slept and lived in the same billets. Hence the different names given in some instances.” XVIII in this case would have referred to one of the satellite work farms affiliated with P.G. 146.

Penny is interested in making contact with the families of Giuseppe Gilardini and Angelo Comelli. If anyone can help her make these connections, please write to me at hill@iu.edu.