Robert A. Newton’s biography of his uncle, Corporal Robert Alvey Newton, Soldiers of the Strange Night, is now available in a Kindle edition through Amazon.

Here is the Amazon description of the book:

“During the night of September 14, 1943, an estimated 3,000 Allied prisoners of war escaped from Camp 59, Servigliano, Italy, under the mistaken impression that friendly forces were only days away. In reality, the Allied armies did not reach that region of Italy for nine harrowing months. With the German army and Fascists feverishly sweeping the countryside for the escapees, they were fed and sheltered by courageous Italian farmers who risked their own lives and property to rescue desperate strangers. The author’s own uncle and namesake was among those who escaped from Camp 59 and evaded recapture until March 9, 1944, when he was betrayed by a turncoat to an elite German commando unit, caught and immediately executed.

“Drawing on interviews, letters, and accounts written by the survivors, as well as war crimes files, Soldiers of the Strange Night vividly re-creates not only one American soldier’s journey into war, imprisonment, evasion and murder, but also the aftermath of the escape as seen through the eyes of his fellow warriors and the valiant Italian family that sustained him during the final days of his life. Soldiers of the Strange Night is a tribute to these remarkably heroic and resilient men who did their duty while facing impossible adversity. It is also a testament to the gracious humanity of the Italian people who dared to protect them, even under penalty of death.”

To learn more about Corporal Newton, read “The Story of Robert Alvey Newton,” “Cesare Viozzi on Sheltering Robert A. Newton,” “Robert A. Newton—Further Details,” and “Soldiers of the Strange Night.” 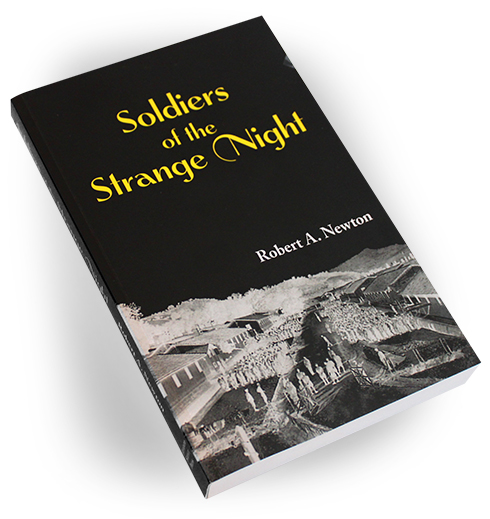 For author Robert A. Newton, publication earlier this year of a 360-page book entitled Soldiers of the Strange Night marked the culmination of many years of dedicated research.

Robert’s experience was a personal journey of first coming to understand, and now sharing, the full life story of his father’s brother—and Robert’s own namesake—U.S. Army Corporal Robert Alvey Newton, who was called Alvey by his family and friends.

Robert took the title of his book from a quote by Pulitzer Prize–winning American journalist and roving war correspondent Ernest Taylor “Ernie” Pyle (who, like Alvey, was born and raised in Indiana and attended Indiana University):

“Everything in this world had stopped except war and we are all men of a new profession out in a strange night caring for each other.”—Ernie Pyle, Brave Men

One way to understand war is to study it in terms of politics, power, strategy, and battles won or lost. Another way, which was Ernie Pyle’s way and Robert Newton’s approach as well, is to see it on a deeply personal level—of men serving together as brothers and caring for each other, while acting in a savage, tumultuous theatre.

This spirit of compassion and bravery was characteristic also of the Italians who sheltered Allied escapers—in the case of Robert and fellow escapee Martin Majeski, the Viozzi family, who are profiled in the book.

END_OF_DOCUMENT_TOKEN_TO_BE_REPLACED

Willard J. Bergstrom—From Traverse City, Michigan, “Bill” Bergstrom was formerly of the 1st Armored Regiment. He was interned at Camp 59 and escaped with Paul Alsin and John S. Skulborstad.

James Edward Kavana—Escaped from Camp 59, was recaptured by the Germans, and escaped again.

Kenneth G. “Bull” Seldon—Escaped from Camp 59 but was recaptured and sent to Germany.

Regarding servicemen from other countries who were interned at the camp, Robert wrote:

“There were Canadians in the area for sure. Raymond Cox told me that.

“Ferree Grossman also said there was a Welshman with my uncle [Corporal Robert Alvey Newton].”

In going though his research resources, Robert found he had two copies of the 1991 membership directory of the national American Ex-Prisoners of War (AXPOW) organization. He generously sent his extra copy to me.

The directory lists home addresses and all of the camps where each member was held. This listing of all camps for each serviceman is especially valuable because the National Archives Records of World War II Prisoners of War lists only the last camp where each man was interned.

As I find time to go though the full AXPOW directory, which contains thousands of names, additional names for the master Prisoner List are sure to surface.

Many thanks to Robert for his generosity.

Late last month Robert Newton of Hillsboro, Oregon, provided me with a list of many POWs who, until now, have not been included on the master Camp 59 Prisoner List.

Robert’s uncle, Corporal Robert A. Newton, was a prisoner in Camp 59, (this site has several posts concerning him), and Robert has conducted years of research into WWII POWs. In fact, I found among my own father’s papers after he passed away in April 2000, letters Robert had sent to him in 1992!

Robert explained, “I either corresponded with these vets or their family members, or met them personally, or heard about them from other escapees. For example, Ken Lightbody told me that he spent nine months on the run with J. B. Tackett.

“Most of my contacts were 20 years ago, so most have since left the stage.

“As you noted, the official records are ambiguous and simply state that a POW returned to allied control. I have enjoyed trying to find out as much as possible to advance the history of these brave men.

END_OF_DOCUMENT_TOKEN_TO_BE_REPLACED

Robert A. Newton of Hillsboro, Oregon, Corporal Robert A. Newton’s nephew (he was named for his uncle when Corporal Newton did not return from the war) had these additional comments concerning his uncle and the interview with Cesare Viozzi (see the previous post):

“The father of the house was Pietro Viozzi.

“My uncle taught himself Italian in the camp. I understand that they held such classes for each other. He wrote home and said that he was learning both Italian and German.

END_OF_DOCUMENT_TOKEN_TO_BE_REPLACED

Italian historian Filippo Ieranò conducted a number of interviews with Italians of the Marche region around 1999–2001.

They were published as Antigone nella Valle del Tenna, or “Antigone in the Tenna Valley” by the regional authority of the Marche (Consiglio Regionale delle Marche) in 2002. The title page refers to “The reception of fleeing Allied prisoners and Jews after 8th September 1943 in the valley of the River Tenna, as a form of civil disobedience against the Nazi-Fascists.”

The publication contains a July 2001 interview with Cesare Viozzi of Santa Vittoria in the Italian Marche.

Here is the story, in both the original Italian and translated into English by Anne Bewicke-Copley.

Avevano appiccato il fuoco (“They set it on fire”)

We were 28 people in the house in this period. We lived halfway between Santa Vittoria in Mantenano and Ponte Maglio, four families together, all in the same house. The prisoners were spread out in the countryside, they came to ask help a bit here, a bit there. So my parents decided to take in two, called Martin and Robert, two Americans, and the family grew to 30 people.

END_OF_DOCUMENT_TOKEN_TO_BE_REPLACED 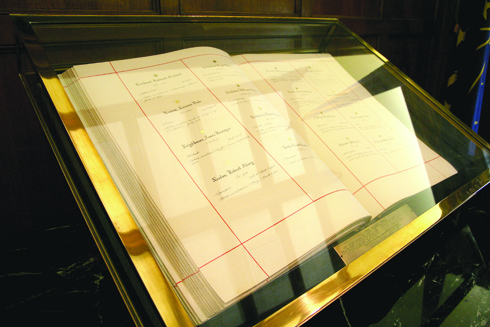 The “Golden Book” honors members of the Indiana University community who served in wartime.

I received an unexpected email from Robert Newton of Hillsboro, Oregon, on
June 16, 2008.

In a second note that day, he added, “By the way, my uncle was from Logansport, Indiana, and attended IU before he was drafted and trained at Fort Knox.”

From my office window I can see the the tall limestone gates that mark the main entrance to Indiana University. Just beyond is the “Historic Crescent” group of early IU buildings Robert would have known as a student when he attended here in 1938–40.

During my 30 years at Indiana University I have walked daily over the paths he would have traveled as a student. I am very familiar with buildings where he attended classes.

I’ve learned through University Archives that Robert’s presence here is documented in yearbooks.

I like to imagine the excitement he felt on coming to college—an opportunity few young men and women had in the late ’30s. But, I am saddened to think how Robert’s education was interrupted by war and that he never returned to school and the full life that he might have led.

In the Indiana Memorial Union there is a room called the Memorial Room.

It is a chapel of sorts, with centuries-old stained glass windows from Europe and an elaborately carved wooden mantel that supports a large, open book—the “Golden Book.” The volume contains the names of “sons and daughters of Indiana University” who served in the nation’s wars.

The room is dedicated to “remembering that the cataclysm of war has entered into the lives of many members of this University.”

Last week I asked that the book be turned to the page that bears Robert’s name.

The names around Robert’s are those of other men who were killed in action during WWII—in Normandy, Germany, the Pacific, and other battlefields.

The inscription for Robert reads:

Robert is long gone, and yet here is a reminder that he was once a student—young and hopeful. And here he will ever be remembered as a son of Indiana University. 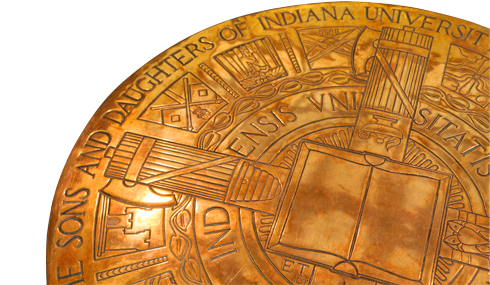 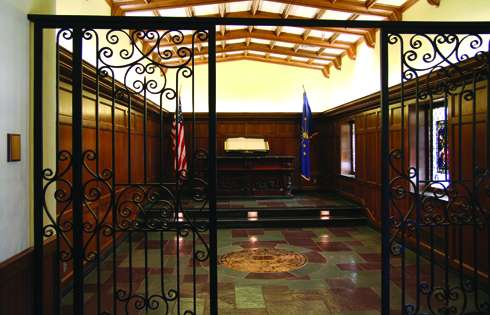 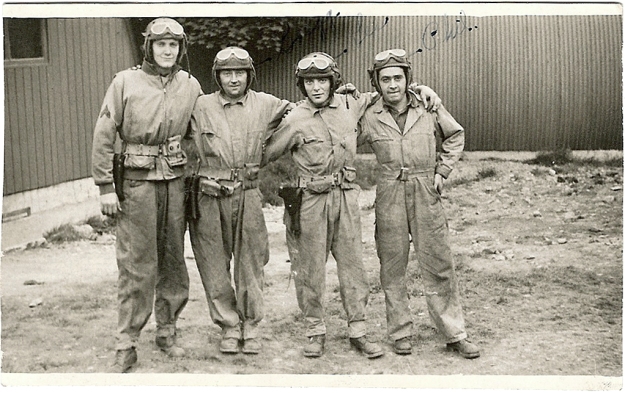 Corporal Robert Alvey Newton served as a gunner in the tank corps of the U.S. Army’s 1st Armored Division. He was captured in North Africa during battle with German forces at Sidi Bou Zid on February 15, 1943.

Of the men in the photo above, Everett Gregg was also captured. Lee Kaser was killed instantly when his tank was hit. Phil Caldwell, who was following well behind in a tank destroyer, retreated when the American forces turned back.

“The tank driver that day was Sgt. Gregg, who was ordinarily the tank commander. But he drove when Captain Winkler was in the command tank. The assistant driver was Al Urbanoski. That was why Phil Caldwell was in a tank destroyer and not in the spearhead of the attack.

“My uncle was burned on the face and hands by the same shell that killed Lee Kaser and blinded Winkler in one eye.

“My uncle and the others were rounded up and taken to Sfax, Tunisia. From there, he and many of the wounded were evacuated to a hospital in Bari, Italy. It was actually a converted convent. A month or two later, he was taken by train up the coast to Camp 59. Everett Gregg was sent to a camp in Germany.”