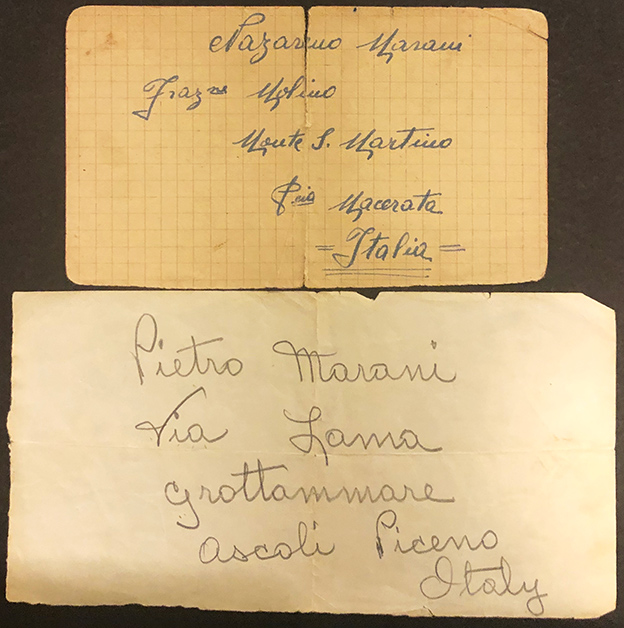 The family of Nazareno Marani assisted Salvatore Mirabello and the men with whom he escaped from P.G. 59.
Pietro Marani was Nazareno’s father.

“My grandfather, Salvatore Mirabello, was an American POW at Camp 59 from approximately January through September of 1943,” says Nikki Morello.

“We have some exciting pieces of history we’ve saved from his experiences, including his biography—spoken by him and handwritten by my grandmother.

“I’d be happy to share any information to continue the understanding and preservation of this piece of history. I am also struggling to find details on the family who kept him safe while he lived in Italy from September 1943 through the spring of 1944. I have been scouring the Internet and Ancestry.com but with misspellings and no living memories—my grandfather passed several years ago—I’m coming up blank. I would greatly appreciate any recommendations or assistance.”

I wrote to Nikki, “I take it your grandfather is the “Sam” Mirabello referred to in ‘Simmons’ Address Book—the Americans‘ and ‘A Southward Migration.'”

She replied, “‘Sam’ is most definitely him. I’m guessing he identified himself by saying he was Salvatore ‘Sam’ Mirabello and became ‘SS’—we’ve seen it on quite a few things throughout the years. His actual name was Salvatore Vittario Mirabello.’

END_OF_DOCUMENT_TOKEN_TO_BE_REPLACED 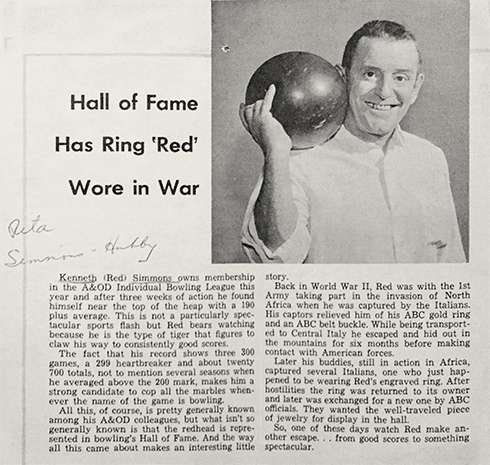 I received a note early this month from Katy Bochetto, who wrote, “My grandfather was Charles K. Simmons.

In her note, Katy told me about Charles’ gold “300 game” bowling ring that was confiscated by Italians after his capture, but was later surprisingly returned to Charles.

In a follow-up email I received today, Katy said, “The family was together for Christmas and more information was found about my grandfather—specifically the story I was telling you about his bowling ring!”

END_OF_DOCUMENT_TOKEN_TO_BE_REPLACED

Using the on-line U.S. National Archives database of WW II POWs, I found matches for all but three names.

There are two possibilities for Sgt. Ira Powers. It seems to me he is most likely Sgt. Oria Powers in the database.

Within the list below, scans accompany the names and addresses of the three unconfirmed men. When I had difficult interpreting the letters in some names, I guessed until I struck gold or exhausted the possibilities.

Of the 66 Americans, 30 are said to have been “returned to military control, liberated or repatriated” from German-controlled camps north of Italy. Apparently these soldiers had been recaptured after the breakout from Camp 59.

Thirteen Americans are identified as have been recovered from CC 59 Ascoli Picenzo Italy 43-13, which means they were last interned at Camp 59.

For 20 Americans no camp was listed. We know they were held in Camp 59, of course, but whether they were recaptured after the escape is unknown.

END_OF_DOCUMENT_TOKEN_TO_BE_REPLACED 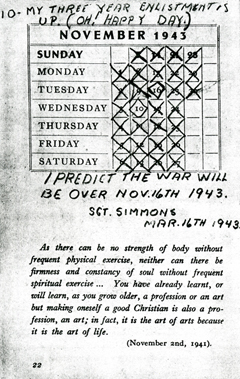 Turn back the calendar pages for a moment to 1943, when Camp 59 prisoner Charles Simmons marked off each day of the year with an X while waiting for war’s end and liberation.

The calendar was a papal-issued calendar/notebook that Charles received before his transfer to Camp 66 Capua and then to Camp 59 Ascoli Picenzo (in Servigliano).

Seven of the 12 months have notes written beside them.

September 8—Fall of Italy we received the news on the 9th.
September 14—EVACUATED CAMP 59 WENT TO THE MOUNTAINS TO HIDE OUT.

November 10—MY THREE YEAR ENLISTMENT IS UP. (OH! HAPPY DAY.)

These simple notes are evidence that the prisoners were continually receiving news and rumors concerning the progress of the war.

Sadly, Charles Simmons’ prediction of war’s end on November 16, 1943 was far from accurate!

Charles Simmons’ calendar and address book contains the names and addresses of four servicemen from England and two from Scotland.

In Charles Simmons’ calendar/address book, beneath the Christmas hymn “We Three Kings,” is recorded the name and address of John A. Allen.

He is the only Australian in the book. 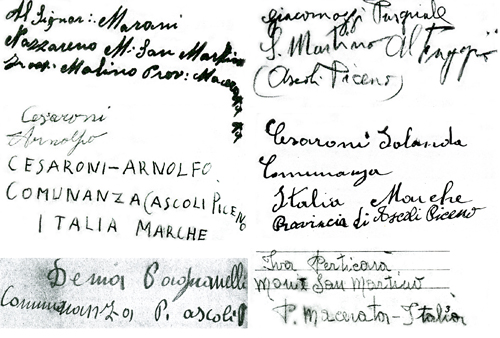 Charles Simmons’ calendar and address book contains the names and addresses of six Italian families. They presumably provided assistance to Simmons after his escape from Camp 59.

Cesaroni-Arnolfo
Comunanza (Ascoli Piceno)
Italia Marche
(Note that the Italians always put the surname before the first name. So the name in this case if Arnolfo Cesaroni.)

If “al Faggio” is the correct place name here (the handwriting is difficult to decipher), there is a San Martino al Faggio in the right area. It’s a frazione of Smerillo—on the hill facing Monte San Martino.

The P stands for Provincia. There were four provinces at the time in Marche. From north to south: Pesaro; Ancona; Macerata; Ascoli Piceno. (Another, Fermo, has been added recently.)

So these places are all on either side of the county borders of Macerata and Ascoli Piceno.

Many thanks to Anne Copley of Oxford, UK, for her help in reading and interpreting these addresses!

Earlier this year, I received from Trish Harper photocopies of a calendar booket her father was given when he was interned at Camp 59. Charles Kenneth Simmons used the printed calendar pages to mark off the days as they passed, and he used blank spaces to record notes about activities in the camp and rumors of war that reached the prisoners.

Simmons used the pages marked for “MEMORANDUM” to list names and addresses of fellow servicemen.

Altogether he recorded addresses of:

I will post all of the addresses on this site as I transcribe them and confirm their accuracy as best I can (the handwriting is not always clear).

Interestingly, the summer 2008 online newsletter of the UK National Ex-Prisoner of War Association contains an article about two prisoners (Maurice Newey and David John Jenkins) from Italian Camp 54 at Fara in Sabrina who had been given copies of the same calendar book.

According to the newsletter, the calendar, entitled “Christmas 1942,” was a gift of Pope Pius XII. The booklet is composed of 48 pages plus a cardboard cover. Pages 26-48 contain hymns and Christmas carols. The booklet also contains quotations of papal encouragement and a prayer by Cardinal John Henry Newman (“Lead, kindly Light, amid the encircling gloom”).