Manuel Serrano in an undated photo. Courtesy of Marie Galarza-Ruiz.

One of the most interesting Camp 59 POWs by far is Manuel Serrano—a young paratrooper of Puerto Rican descent from New York City’s Brooklyn borough.

Even during the war, Manuel gained recognition as a tough, colorful character when his exploits behind enemy lines in Italy were profiled in Yank magazine. See “The Partisan from Brooklyn.”

I was so pleased to hear recently from Marie Galarza-Ruiz, who shed further light on, and a glimpse into a tender side of, this enigmatic character.

Marie wrote, “Manuel Serrano was a very close friend of my parents, Ignacio and Maria Galarza, and our family.

“I can’t tell you how surprised I was to find the clipping of him on your site. I have the same clipping in a scrapbook I keep of him to this day. He was such a special man and I absolutely adored him. His military service record is incredible and a testament to his strength and courage.

“He also led a very interesting life after leaving the military. He had small parts in a few Hollywood movies and lived most of his life in Europe, where he married his wife Adrienne in France.”

“He had a small part in the Valachi Papers and a larger role in Land of the Pharaohs, starring Joan Collins. He played her personal guard. He looked terrific in an Egyptian costume.

“One of my favorite memories of him occurred during one of his stays with us. He was sleeping, and the phone rang. I answered and a male voice on the other end said, ‘This is Anthony Quinn may I please speak to Manny?’

“To which I responded by hanging up the telephone on Anthony Quinn.

“He called back, thankfully, and assured me the call was not a prank. I woke Manuel up so he could take the call, and he laughed when I told him what I had done.

“He was quite suave and fluent in several languages. He was very health conscious. He took a lot of vitamins and was an avid bodybuilder. He very vocally savored every traditional Puerto Rican meal my mother ever cooked for him. He always stayed with us when he was in New York.

“He always had a kind word for everyone and gave me my childhood nickname, that I happily still answer to today.

“As a child, I regularly corresponded with him and I can’t tell you how much I looked forward to his letters.

“He never had any children of his own and passed away in California.

“I mentioned finding the article online to my sister and she said she remembered hearing that he had endured some torture. He never discussed his war experiences with me or in my presence because I was so young.” 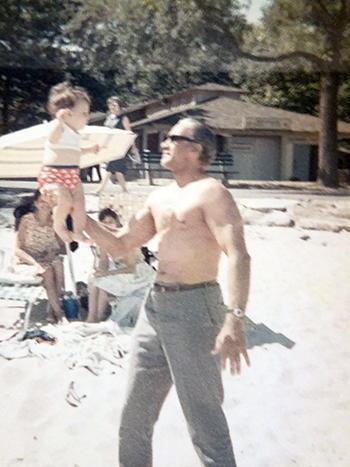 “I do have pictures of Manuel, though not of us all together. I have a few of me as a child with him. There is one picture, that is my absolute favorite. I am about 10 months old and we are at the beach and he is holding me in the palm of his hand.

“I also have some studio shots of him and some other newspaper and magazine articles in my scrapbook.

“I have many fond memories of him and think of him often.

“Manuel Serrano was a truly incredible human being and I loved him very much and I always will. Thank you for giving the opportunity and method for sharing my memories.”

In addition, Manuel acted in films where he received no credit or his last name was spelled Serano. He was cast in the role of an Arab in John Huston’s 1953 film Beat the Devil.

And he played the role of Murieta in Sotto a chi tocca!

Ian McCarthy, who lives in Servigliano—where P.G. 59 was located—and is active in Casa della Memoria, shared this information with me:

“Manuel Serrano had a French wife called Adrienne, but no children. He and his wife moved to Rome after he retired and used to visit Servigliano every summer.

“After Manuel died, Adrienne moved to Servigliano and lived in a little old house just up the steep hill from the camp. She was the first person I met who talked about the prison camp and she gave me her husband’s manuscript. It’s in the archives of the Monte San Martino Trust.

“As her friends in Servigliano died off, Adrienne became increasingly lonely and eventually, with the help of the Salvation Army, she found a lost sister in California and moved there to be with her.”

Later, she wrote to say she was living in a senior living community.

“This was the last time we heard from her,” Ian wrote, “more than 10 years ago now.”