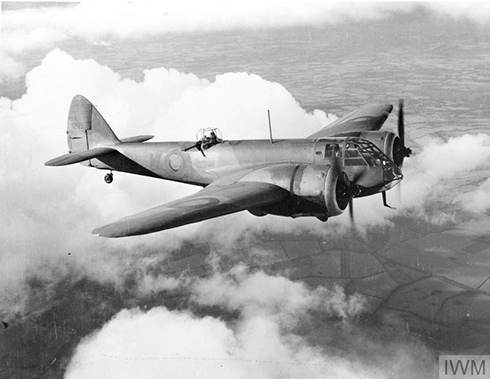 Bristol Type 142m Blenheim I aircraft of the Royal Air Forces in flight. Image from the collections of the Imperial War Museums.

I heard this week from Thanos Antonelos, who lives in Athens, Greece.

“On 13 December 1941,” he wrote, “Blenheim Z7800 (Squadron 107, Royal Air Force), was downed at Kefalonia Island, west of Greece. Most of the crew were killed. Three survived, were captured, and ended up in POW camps:

“I have attached for your records a file from KEW (WO392/21)—the page where Sgt. Lee is recorded as having been a prisoner at Camp 59.

“Unfortunately, I haven’t yet found his POW number and what happened at last with all three—if they survived.

“The crash of Blenheim Z7800 came because of anti-aircraft fire from Italian war ships. Kefalonia and all the islands on the west side of Greece in that period were occupied by the Italians, not the Germans.

“Near the port of Argostoli were two MVs [merchant vessels], and those two merchant ships were the target for Sgt Lee: Capo Orso (3.149 grt) and Iseo (2.366 grt). But they were protected by two Italian warships, the Strale and the Turbine. [GRT is gross register tonnage.]

“Finally, an Italian Macchi aircraft was also at the area, which made things even more difficult.

“In this same mission, another Blenheim—Blenheim Z7368 (Squadron 107, RAF)—was lost and all the crew were killed in action, including:

“Now, you have the complete story of Sgt. Lee and his aircraft Z7800.

“Please, see attached file AIR 27/842, which is the Operation Record Book of 107 Squadron. It gives rich information on the air mission.”

“Six Blenheims captained by P/O. [pilot/operator] Broom, P/O. Williamson, Sgt. Noseda Sgt. Crossley, Sgt. Lee and Sgt. Gracey, despatched to attack shipping at Argostoli. P/O. Broom and P/O. Williamson attacked the 4,000 ton merchant vessel and Sgt. Noseda the 8,000 ton m/v. The decks of two destroyers were machine gunned. Sgt. Crossley attacked the 4,000 ton m/v. No hits were claimed but P/O. Broom’s second bomb over shot by 25’ so the first probably hit the m/v. Crews of the destroyers were seen running to man the guns and were machine-gunned by P/O. Broom and Sgt. Crossley and one gun was silenced. Opposition was intense from all ships and heavy positions were firing from the hill South of the target and the town. All the aircraft were attacked by a Macchi which was hit by Sgt. Crossley. Aircraft captained by Sgt. Lee and Sgt. Gracey failed to return.”

Thanos had a final request. “If you may, please inform me if in the future anyone gets in touch and gives more information about Sgt. Lee.

Anyone unfamiliar with WW2 aircrew roles can learn more on the Imperial War Museum post explaining “Who’s Who in an RAF Bomber Crew.”