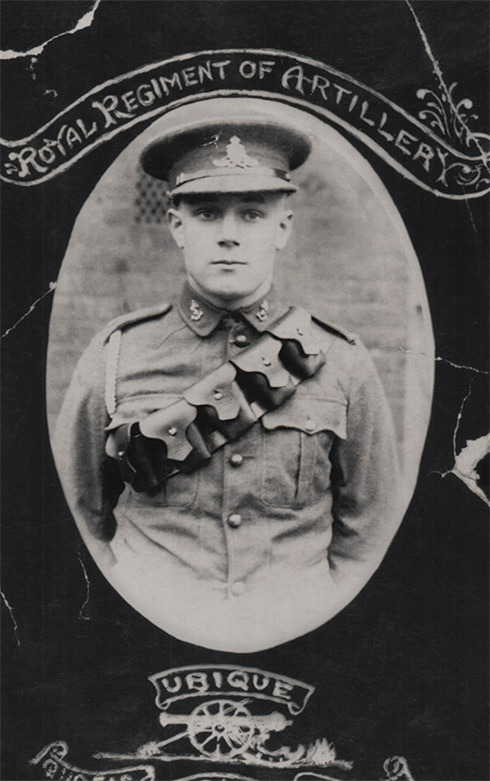 “A portrait of Bertie from an unknown time,” says Jeremy Bones, “but given he looks young, it could be pre-WW2.”

I received an email last month from Jeremy Bones.

He wrote, “I am currently conducting research into my great-grandfather, Gunner Ronald Bones, who was held as a POW in Camp 59. I have noticed that Robert Dickinson, who wrote “Servigliano Calling,” was also in the camp but, more importantly, was in the same battery as my great-grandfather, 237 Battery of 60th Field Regiment, Royal Artillery.”

Indeed, Ronald Bone’s address is one of 20 recorded in Robert’s journal. As such, it seems likely he and Robert were good friends. See “Robert Dickinson’s Address List.”

“My great-grandfather was born on 21st August 1910 in Grimsby and lived in Lincoln his entire life.” Jeremy said.

“I have a number of photos of him in my possession, and a good few are of him in POW camps. I know some of them are from Stalag VIIIA.

“He was captured in November of 1941 in Libya, after the battle of Sidi Rezegh. I strongly suspect this was on the night of 23rd November and he was captured along with Robert Dickinson of 237 Battery, Harry Foster—who I can confirm was in 237 Battery (I have found a photo of him with Robert Dickinson), William Rawlinson who lived in Lincoln and was probably in 237 Battery, and possibly George D. Jordan, who came from Grimsby.

They would’ve been captured as they retreated from the battle of Sidi Rezegh, where 239 Battery of Grimsby was decimated covering 237’s retreat. I have found an account in the book All the King’s Enemies, where it mentions Lieutenant Lacey and Berry of 237 Battery were captured along with 25 others—those I’ve mentioned above presumably among them.

Sadly, Major Lacey died last year. According to his obituary, he was first in an internment camp at Benghazi, which is likely where my great-granddad and the other four ended up before Camp 59.”

Below are the photos Jeremy sent me.

He said, “I’ll refer to my great-granddad as Bertie throughout the photo descriptions.” 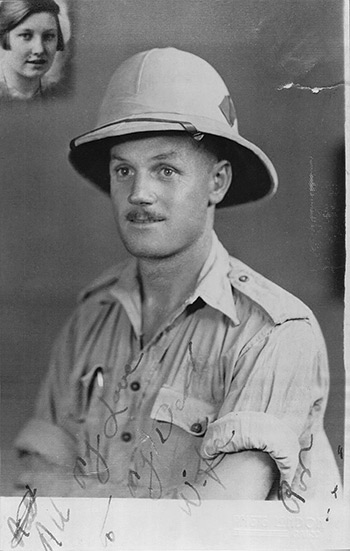 “Bertie with my great-grandmother in the top left corner. My best guess is that it had been sent when he was in North Africa.”

“Bertie on the right with an unknown bombardier. Again, he looks young so it could have been taken in Gibraltar, where I know he was in 1929.”

“Bertie with other members of the RA and probably his troop from 237 Battery. He is sitting down, far left, with a three-year service stripe on his arm. He looks slightly older in this photo, so my guess would be late 1930s—but it could easily be anytime up to January 1941.” 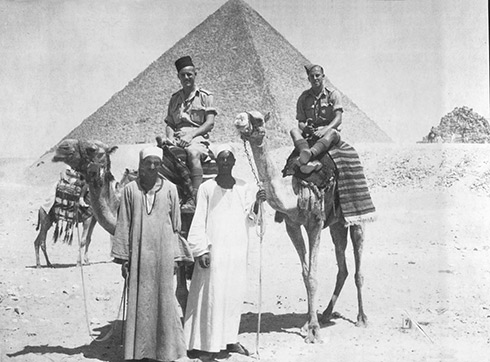 “An interesting photo. It shows Bertie clearly in Egypt, again with an unidentified individual (Bertie is on the left), probably from 237 Battery. This could have been from either April of 1941, after 237’s initial deployment to North Africa, or after returning from Syria, having fought the Vichy French.”

“Bertie, again looking very young in his RA uniform, so my guess would be pre-WW2.”

“Bertie in his RA uniform riding a horse. Definitely going to be pre-WW2, as I am aware 237 battery was fully motorised going into WW2.” 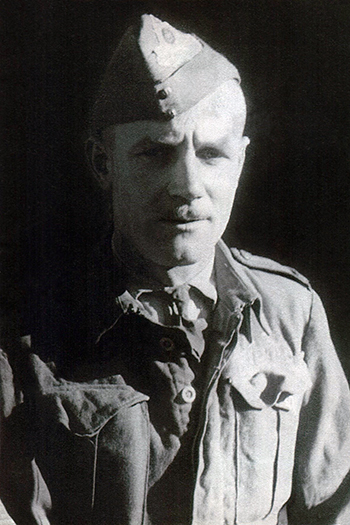 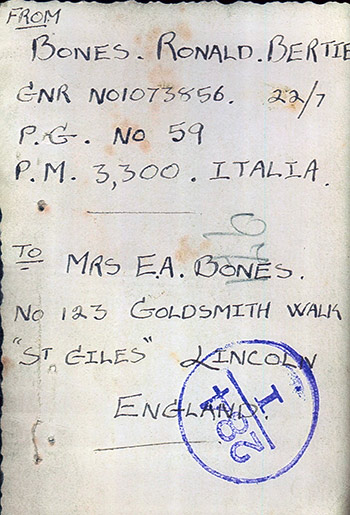 “A portrait of my great-granddad, taken whilst he was in Camp 59 (as confirmed on the back).”

“These photos show a Royal Artillery badge made by Bertie whilst he was a POW. The reverse shows the Maple Leaf Cheese packet it was made from. This clearly shows he had some needlework skills. My granddad’s sister still has this badge in her possession.” 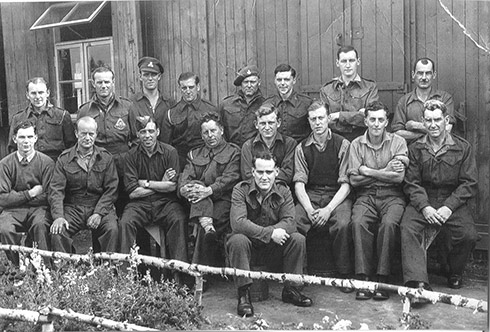 “Bertie in Stalag VIIIA, second from left, top row. As you can see in this photo he is wearing the cheese badge!”

“Bertie, bottom right, with four other individuals. Clearly their cap badges identify them as RA, and probably from 237 Battery. Given how much older he looks in this photo, it leads me to believe it was taken in WW2, but the grass suggests it wasn’t North Africa. Could this potentially be during 237’s time in France during 1940, before the Dunkirk evacuation?” 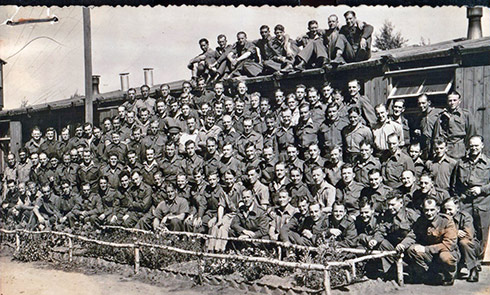 “This is a photo of him in Stalag VIIIA, He is sitting on top of the hut, third from left. I think he looks particularly aged in this photo, showing the effect the war and being a POW would have had on him.” 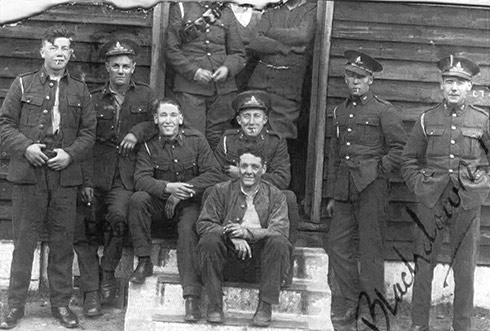 “Bertie—identified with ‘Dad’ on the photo holding a cigarette—with others. ‘Blackdown’ which is written on the photo I believe refers to Blackdown Barracks (modern day Princess Royal Barracks). Unfortunately, the date is obscured so I don’t know what year this is from. Again, given how young he looks, my guess is it would be from the early 1930s.” 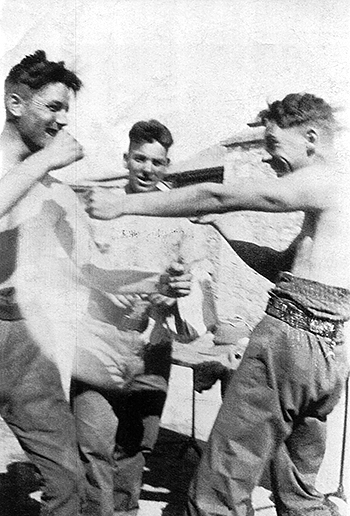 “Bertie on the right, clearly having a mock fight with someone whilst he was in Stalag VIIIA.”

“Bertie (standing, far left) with others in either Egypt or Gibraltar, a note the back of the photo suggests. It is difficult to tell how old he is, which makes it difficult to pinpoint its location.”