David sent me a packet of photos, letters, and other documents to scan, which I am sharing here. I am pleased to offer this post as a tribute to Pat.

Here are comments from David:

“Pat and I were very close. Even though there was a six-year age difference, he used to carry me around on his shoulders almost wherever he went.

“In Easton, we lived about six miles from the nearest town and had 50 acres of land. There were no houses within a mile. It was a great place for hunting and fishing. When it came to hunting, I thought I was a fair shot but Pat could hit more from the hip than I could from my shoulder.

“Pat went to high school in Easton and also attended a technical school in Brockton, Massachusetts. He was very good at math and wanted a greater challenge than high school offered.

“Pat was always ‘tinkering,’ and he made our first crystal radio set and built a number of model airplanes. He was a happy-go-lucky kid and a great brother to me. He was a hero, in my eyes, long before he became a hero in WW II.

“When WW II started for us in 1941, Pat made up his mind to go and he applied to the Navy Air Force. (Our Dad was a veteran of WW I and WW II, and was awarded the Navy Cross in WW I.) Pat was turned down by the Navy, as he had a bad scar on his leg from a fire at our home in Boston. The leg didn’t interfere with any physical activities but the services were picky during the early days of the war. Pat then joined the Army Air Force and was assigned to flexible gunnery training at Tyndall Field, Florida. One of his friends who attended this school was Guy E. Shelley, who was a waist gunner on the 514th Squadron’s Lady Be Good, lost on its first mission on April 4, 1943.

“My brother’s photos often show a friend alongside. I tried to identify these men from the collection of photos from the Air Finders but couldn’t find a match. I know my brother was close to Joe Prendergast and Willy Lutz. I sent V-mails to Willy after my brother was gone. Incidentally, I had some correspondence from the Gold Star Mothers and from other crewmembers.

“In the spring of 1943, my brother Pat sent a photo of himself pointing to the fuselage of a bomber named the Wolf Pack. He said he was pointing to my brother’s name, and mine, on the plane. As a result, we assumed that this was his assigned aircraft. I went to Wright Patterson Air Force Base in Dayton, Ohio, and was given access to their archives. No photo or reference of the Wolf Pack showed up.

“When I read the report from the Salerno 1943 Air Finders, I realized that I was searching for the wrong plane. Up to that point, I’d never heard of the Fyrtle Myrtle. The 376th Bomb Group historian, Ed Clendenin, confirmed the name.

“My father was on a destroyer, in the Pacific, when he received the missing-in-action report, and later the killed-in-action report. He was never the same after that. I was at home, with my Mom, when she received the MIA telegram, and then the KIA telegram. I’ll never forget the pain I witnessed as long as I live. Since I was 12 at the time, I didn’t believe either telegram. I knew my brother was indestructible and would be back.

“Along with the photos of my brother, I’ve included a list of relatives of the crew members of Fyrtle Myrtle. The note from Ed Dzierzynski is particularly interesting. He made a reference to theWolf Pack. It looks as though pilot and crews were assigned to different available aircraft. I wish the names of the crew members were included in the mission reports. They only listed the name of the pilot. 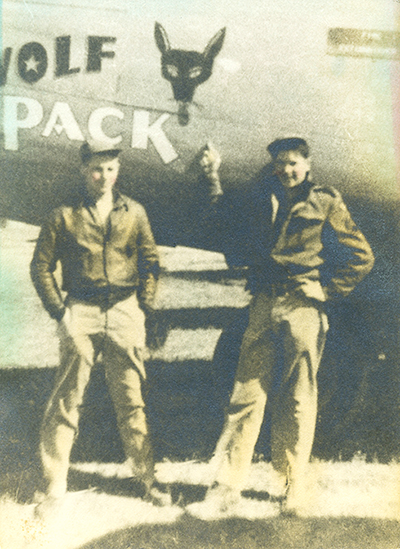 Pat, at right, pointing to his two brothers’ names written on the side of the B-24 bomber named the Wolf Pack. The other crew member is unidentified. This photo was taken in Soluch, Libya, in 1943.

“My father and both brothers served in WW II. Brother Charlie served on subs near the end of the war. His commanding officer, incidentally, was Edward L. Beach author of Run Silent, Run Deep and an advisor to President Eisenhower. The only member of my family, wasn’t in the service—now ‘military’—was my mother.

“My wife Sandy and I took my mother to visit the grave of my brother and his three crew members in 1966. It’s still enough to tear one’s heart out—all those young men, along with many others who gave up their lives for their country. Pat once wrote that he planned on getting more medals than his dad. He received one medal, that I wish he hadn’t—the Purple Heart that was awarded posthumously.”

In 2001, Pat was recognized in his hometown of Easton, Massachusetts, with the naming of a square in his honor, the Patrick F. Shea Jr. Square. This is the cover of the dedication program.

Pat is on the right above. A note on the back of this photo indicated the fellow on the left “might be Guy Shelley.”

A note written on the back of this photo reads, “our abode/love,/June.” June, or Jun, was a family nickname for Pat, since he was Patrick Shea, Jr. 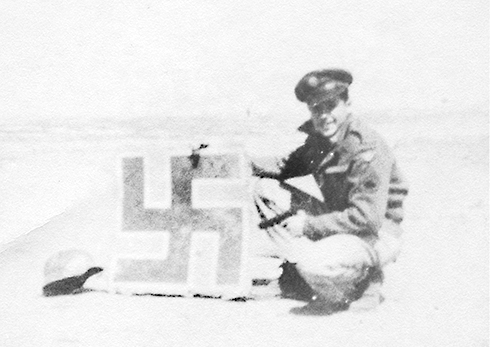 A note on the back of this photo reads, “This was for the benefit of his kid brothers at home.”

This address list of the crew members of the Fyrtle Myrtle and their next of kin. It is a list that is included in the U.S. War Department’s missing air crew report for the crash.

The following condolence letter was sent by Helen Groshart, Cyrus Johnson, Jr.’s aunt (and apparent guardian, as she is listed as first of kin in the address list for the servicemen) to Anna Prendergast, Joseph H. Prendergast’s mother.

It is over a year since our boys were shot down, and I am the most fortunate of all, for my boy is home, well and uninjured. He knows how anxious you parents are to know the fate of your boys, and I am taking this means to tell you the unhappy news. There were only three boys saved – Cyrus, Dulac, Dzierzynski. Dulac is still a prisoner in Germany, as he was badly burned and perhaps blind. Dzierzynski was wounded, but he came home with Cy. The rest went down with the ship – heroes all. The plane carried the bomb load and 2500 gals. of gasoline when it was hit, so it did not take it long to catch fire.

You probably will receive notice from Washington very soon, but in case you had no definite word, we trust this will relieve your anxiety. There is little we can say, as indeed it has been a trying year. Know we understand and Cy and I want to extend our deepest sympathy and home some day you may talk with him personally.

Most sincerely yours,
Helen Groshart

A note on the back of this typed letter reads, “Copy of letter written to Mrs. Prendergast by Eddie Dzierzynski, tail gunner of the Wolf Pack.” This reference to the plane is confusing, since the U.S. War Department missing air crew report for this crash indicated the bomber was Ship No. 44, which was called the Fyrtle Myrtle.

I asked David Shea about this, and he replied, “I’ve gone through the entire 376th Bomb Group Mission History (E. F. Clendenin, Jr., historian) and found the Wolf Pack listed in missions prior to July 16, 1943. In many cases, Fyrtle Myrtle flew with it. I know the Wolf Pack was not with the bomb run on July 16th as it was listed with missions after that date.”

I received your letter but I’m a bit late as you can see answering.

I can tell you very little about the Wolf Pack, as I don’t believe anyone really knows all there is. What really happened is this. We were dive bombed by a Jerry and put on fire then it must have blown up. Bob Dulac and Johnson were able to bail out. Kile and I were stuck in the tail. I was blown out of the ship but somehow my parachute opened as I’m sure I didn’t open it because I passed out from lack of Oxygen, when I came to I was in a dried up river bed in Italy. I must have hit the ground pretty hard as my ankles were pretty beat up and I couldn’t walk as my left leg was bleeding too much from a wound.

The following day I met Dulac in the hospital, he also was pretty well burned about the head and couldn’t see at all. I heard from Dulac’s Mom he is a prisoner in Germany.

One night we managed to break out of the prison camp and hid in the mountains for 9 mo. so last June took a chance to get through the Jerry lines, we made it as I am here at home now.

I got a medical discharge Oct. 14 and have been home since.

The other boy Johnson is in the States but I never did hear from him.

I believe the other fellows got it, as in the hospital they told me they buried 7 bodies. I believe Joe was one of those.

I think this is the best I can do I get to tremble too much at times, I only hope you can read my writing.

I’ll say so long for now wishing you the best of everything – hoping to hear from you again.

Marker at the common grave of Richard Greenawalt, Charles Hinson, Joseph Prendergast, and Patrick Shea in Jefferson Barracks National Cemetery in St. Louis, Missouri. A handwritten note on the back of the photo reads, “Jefferson Barracks Historical Park/Easter 1966/June’s grave.”

On Thursday morning the 8th of December 1949, the remains of the late S/Sgt. Patrick F. Shea were permanently buried in Section 79, Grave number 382 of this national cemetery, together with the remains of those other descendants comprising the group which could not be separated because of the circumstances under which their deaths occurred. Customary military funeral services were conducted and full military honors were rendered.

An appropriate headstone will be erected and maintained by the Government to perpetually mark the common grave of these fallen heroes.

With the thought that it will prove to be of sentimental value to you, this United States flag is forwarded to you by the Government as a token of appreciation and sympathy of a grateful nation.

I have the honor to inform you that, by direction of the President, the Air Medal and two Oak-leaf Clusters, representing two different awards of the same decoration, have been posthumously awarded to your son, Staff Sergeant Patrick J. Shea, Air Corps. The citation is as follows:

“In recognition of meritorious achievement while participating in aerial flight in the Middle East Theater, he having participated in twenty operational sorties of two and one half hours or more duration.”

The decorations will be forwarded to the Commanding General, First Service Command, Boston, Massachusetts, who will select an officer to make the presentation. The officer selected will communicate with you concerning your wishes in the matter.

May I again express my deepest sympathy to you in your bereavement.