This photo of Leslie “Jack” Young appeared on the front page of the North Beds Courier to mark the trooper’s return from Switzerland where had been confined since escaping from Italy in October 1943. The caption reads: 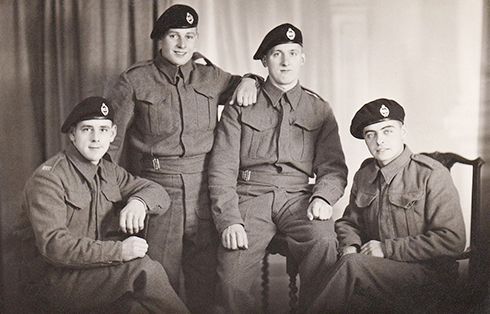 This studio portrait appears to be of Jack Young with members of his tank crew before their service in Africa. Jack is seated at right. Note the Royal Tank Regiment badges on the men’s black berets.

I heard this past week from Lyn Jones, who e-mailed me from the UK.

She said, “I am writing to tell you about my father Leslie John (Jack) Young (7901430), who was a prisoner at Camp PG59 in Italy. He was in the 4th Royal Tank regiment and was taken prisoner by the Germans on 17 June 1941 near Sidi Omar. After working for the Germans in Tripoli he was sent by boat to Sicily in 1942 and later to the camp near Servigliano.

“I have written accounts from newspaper articles written about my father on repatriation, of some of the things that happened there.

“After being moved again further north and following the Italian collapse in September 1943, the Italian guards vanished and my father was in a group of prisoners who did the same! They eventually escaped to Switzerland in October 1943 after walking through the mountains.

“My dad was only ever called Jack and not Leslie, although that was his given name.

“Dad had also been rescued from the beaches of Dunkirk in 1940. He was very reluctant to speak about any of it, but after seeing the exhibition showing the terrible scenes at Dunkirk that is now on display in Dover Castle, I am not surprised.”

Below is the text of a two-part report in the North Beds Courier (and Biggleswade Record) on Jack’s war experiences.

Trooper Leslie J Young (Jack), a well-known Sandy man, whose mother and sisters live at South Road, Sandy, and who the day after his marriage to Miss Peggy Griffin of Edward Road, Biggleswade, was recalled from leave, recently returned to this country.

During the four years he has fought in a tank in the mountains of Eritrea, on the sands of the Western Desert, been a prisoner of war in Italy, finally escaping to Switzerland following the Italian collapse last year.

Trooper Young was mobilised on the outbreak of war and after a short period in France, was evacuated from Dunkirk. In October 1940, he left England and fought through the East African campaign in Eritrea up to the fall of Massawa in April 1941. By this time thirteen of the sixteen tanks of his company had completed one thousand miles, twice what the ‘Waltzing Matilda’ was expected to do. The Ordnance Officer was so pleased with their performance that he promised they should have the first sixteen tanks to arrive and go straight up to the Libyan front to meet Rommel’s forces.

On 17th June 1941, with his tank badly smashed and on fire, two of his companions wounded and his commanding officer killed during a close range battle with the German Mark IV tanks, he was captured near Sidi Omar whilst trying to escape on foot.

With many others, he was quartered in a German working camp at Tripoli where, contrary to the Geneva Convention, they worked for eighteen hours a day, unloading ships and loading trucks with munitions. Early in 1942 he was transferred in a cargo boat to a camp in Sicily and later to a prisoner-of-war camp near Savigliano near the Adriatic coast.

When asked to recount his experiences there he was reticent and said “Well, one forgets the bad times and only remembers the good times, but had it not been for the Red Cross parcels, which made a tremendous difference, every man would have died from malnutrition. The food supplied by the Italians was not sufficient and we used our pay—about 30 lire a month—to buy tomatoes and onions to put in the stew and oranges, which were eaten including the peel.”

Before the Red Cross parcels began to arrive many of the men were so enfeebled that they had to be carried to their meals and back again. Many suffered sudden black-outs and had to be carried to the huts, and none were strong enough to do any work. That first winter was the coldest Italy had experienced for fifty years and there was no provision for heating the huts, so everybody just lived in their blankets.

When things got better, sports, football and boxing matches were organised, leading to ‘international’ contests. As instruments arrived a band was formed and the camp dramatic society produced many sketches and plays, despite the lack of stage props and suitable dresses. Generally speaking, parcels of clothing from relatives arrived safely, as did also parcels of cigarettes from home.

On Wednesday last Mr W G Braybrooks JP (Chairman of the Sandy Services Gift Fund) presented to Trooper L J Young a cheque for £6 15s, being the total amount of the periodical gifts made to all Sandy men and women and banked on his behalf during his four years’ absence from this country. The secretary of the fund, Mr J Lawrie was also present.

Trooper Young was shown a postal order for five shillings, which as the covering letter indicates was sent to him in January 1941 and which was returned to the secretary in January 1942. In the meantime it had spent a period, presumably with the rest of the mail at the bottom of the sea, for the envelope bears the inscription ‘Salvaged from the sea’.

By the time it reached his unit, Trooper Young had been captured and another inscription says ‘Missing – A C Glover 2/Lt’ Lieut Glover was subsequently killed. The only damage suffered by the letter and its contents is that the gum has disappeared from the envelope flaps.

Continuing his story, the first part of which appeared in this newspaper last week, Trooper Leslie J Young, a well-known Sandy man writes: When our troops landed in Italy in June 1943, the prisoners were moved in parties of one hundred to Northern Italy, where they went to work on farms, conditions being very much better. The peasant farmers usually gave our men extra meals and displayed a certain amount of sympathy, which when the Italian collapse came in September 1943, took practical shape. The Italian sentries threw away their arms, donned civilian clothing and vanished. Our men followed their example, hiding on the farms where they had been working.

Trooper Young lived for five weeks at a small shop, where the old couple, remembering what our soldiers did for them in 1914–18, treated him well and in spite of the activities of Fascist spies and German soldiers, he went about the village in civilian clothing without being detected. Many of them were recaptured and their hosts were shot and to relieve the obvious anxiety of the old couple—who never complained, however, —Trooper Young and eight others availed themselves of an opportunity afforded them of getting over the Swiss frontier. The only real shortage during his stay in this village was tobacco and he smoked various concoctions.

Two Italians—non-Fascists—who knew the escape route acted as guides and the party of eleven, travelling each in a separate compartment, left Vigevano by the night train. Because of the language difficulty and the activities of Fascist spies, they were instructed to feign to be either dumb or silly if they were spoken to. At Milan, where they changed trains and which they had often seen bombed by our airmen, one of the party was searched by a German military policeman. His case containing a small amount of food and some wine was scrutinised, but the German was satisfied. Little did he dream he was allowing a party of escaping British soldiers to pass through.

During the following night they walked over mountains, covering twenty-six miles in six hours, scrambling through the wire on the Swiss frontier at 5am on 27 October 1943. Utterly exhausted, they stretched themselves on the roadside and went fast asleep. The Swiss guards seemed pleased to find them, but they were so stiff from the unaccustomed exercise that a cart had to be requisitioned to move them to the village guardroom.

In Switzerland, Trooper Young was stationed in a German speaking Canton, St Gallen, on the German border and while he found the Swiss somewhat reserved at first, they soon grew accustomed to our men and his stay in Switzerland was very pleasant. Winter sports were taken up enthusiastically, but most men found tobogganing preferable to skiing, which seemed to demand a special kind of adaptability. For part of the time he was billeted in a hotel at Arosa in the Swiss Tyrol.

The American invasion of Southern France, says Trooper Young, gave them all renewed hope of getting home. Travelling via Geneva, Marseilles and Naples, spending a short time at a rest camp on the Salerno beach-head, they eventually docked at a Northern port in England, welcomed by a military band, Standing on the dockside, a member of the WRNS recognised her husband, who had been away from England for some years.

Trooper Young said that when supplies began to get through to them and when mail began to arrive, the knowledge that the people of Sandy were keeping him in mind, keeping in touch with him and when possible sending cigarettes and letters, helped to restore him to a more normal frame of mind. He would be always grateful to them for their kindnesses.