The Monte San Martino Trust has celebrated its 30th anniversary this year.

Founded by Keith Killby in 1989, the Trust has provided hundreds of young Italians with English language study bursaries in England.

The educational bursaries are in recognition of the bravery and generosity of Italian families who assisted escaped Allied prisoners of war during the Second World War.

The Trust also keeps the escape stories alive through annual Freedom Trail Walks, a newsletter, and an online archive of stories. Most importantly, the organization serves as a rich British-Italian cultural bond.

At their annual Fontanellato Luncheon last month, the Trust celebrated its three-decade history with the release of a Monte San Martino Trust Thirtieth Anniversary Video, which is now accessible on YouTube.

The inspiring film features brief interviews with former POWs, Italians who provided them with protection, and students who have benefitted from the Trust’s educational bursaries.

The film was created by director Zak Jarvis, a Trust supporter and the great-grandson of Ernest Day, who was a prisoner of war Gavi.

Trust founder Keith Killby remained active in the Trust until his death last year at the age of 102. 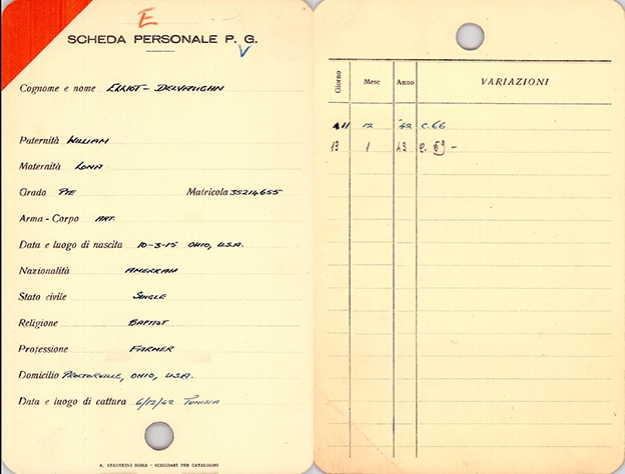 Access to identity cards of American POWs of the Italian Army is now available on the website of the U.S. National Archives. Shown here is the front and back of the card for Delvaughn Elliot.

Here is a PDF of the document:

This inventory is meant to serve as a finding aid for researchers accessing National Archives and Records Administration (NARA) holdings of the Allied screening commissions as they relate to POWs, escapers and evaders, and their helpers in Italy.

Readers wishing to follow up with a reference request pertaining to these holdings can email it to archives2reference@nara.gov. Requesters should provide their full contact information with the inquiry.

In time, NARA may devote a web page to these records, as they have for other subjects and records, and over time more documents described in the inventory will be available online. In June, among the first of the records to become available online were the Identity Cards for American Prisoners of the Italian Army.