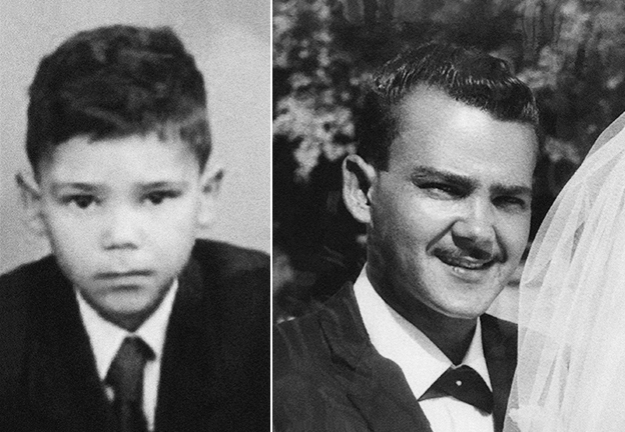 Left—Guerrino Bari’s son Thomas Fortuin at age nine or ten. Sandra says, “This is the only photo that we have from his childhood.” Right—Thomas on his wedding day.

Earlier this spring, Sandra Hoffman asked me for help in locating her grandfather’s family in Italy.

“We are from Franschhoek in South Africa,” Sandra wrote. “My grandfather (my father’s father) was/is Guerrino Bari. He was a Prisoner of War in Stellenbosch, South Africa.

“We know for a fact that he left the country after the war, and my grandmother had no communication with him after that. We are hoping for an image of our grandfather and maybe contact with surviving family members.”

I asked Sandra for more detail.

She continued, “I am a South African citizen, as was my grandmother. Guerrino Bari was one of the big group of prisoners that was sent to South Africa during WW2. He was sent to the town of Stellenbosch to work on a farm. It is in the Wine Country, and the Italian POWs used their knowledge and skills to build cellars and houses on the farms.

“My grandmother lived/worked on the Koopmanskloof farm.

“My father never knew his father. Grandma said that my grandfather took a photograph of his son before the group of Italian POWs were sent back to Italy. Grandma put my father up for adoption, and the new family changed his name and surname. We will never know if his father enquired or searched for him, due to the adoption.