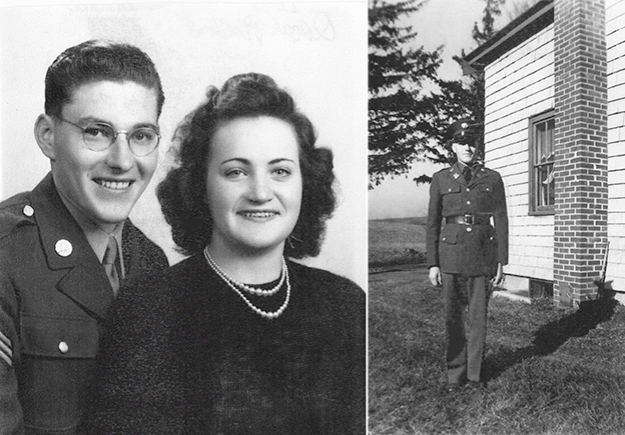 At left, Oscar with wife Virginia E. Howell; at right, Oscar in 1940

Sergeants Oscar Ruebens and John Withers served in the same unit of the U.S. Army’s First Division in North Africa. In December 1942, they were captured together at Long Stop Hill. Both men were sent to P.G. 98 on Sicily and then transferred to P.G 59 Servigliano.

The friends left Camp 59 together during the mass breakout on September 14, 1943, and they made their way to the Allied lines in less than two months.

I first posted about Oscar on this site in February of last year, “Oscar Ruebens—Snapshots from the Past.”

I have since been in touch with Oscar’s youngest daughter, Laura Turner, who kindly sent me snapshots, news clippings, and documents. I will share some of these in separate posts.

For this post, I am sharing Oscar and John’s repatriation reports.

The POW repatriation reports were prepared during WW2 by MIS-X Section, POW Branch of the U.S. War Department.

END_OF_DOCUMENT_TOKEN_TO_BE_REPLACED

Oscar Ruebens, wearing round eyeglasses in these photos.

I received a message from Carrie Stevens last year on November 19. She wrote, “I am reaching out to you because I am the great granddaughter of Oscar C. Ruebens.”

His Italian POW card, archived at the U.S. National Archives, indicates he was captured in Tunisia on December 23, 1942.

Given the date he was captured and the fact he was in the Infantry, it seems likely he was taken captive during the first battle of Longstop Hill, December 23–24, 1942.