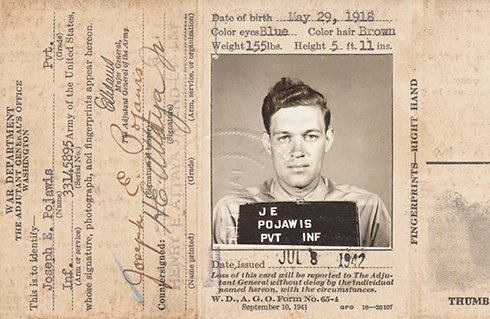 I received a note this past week from Wally McCollum of Maryland.

Wally has a family connection to American soldier Joseph Pojawis, who was interned at PG 59 January 23–September 14, 1943. In his note, Wally related how he and his wife discovered new information about Joe’s combat and POW experiences just one week ago (over the U.S. Memorial Day weekend):

“This past weekend at a family reunion I came into possession of a diary kept by my wife’s uncle Pvt. Joseph E. Pojawis, who served in a light mortar squad, Company A, 18th Infantry Regiment, 1st Infantry Division. He was captured on December 23, 1942 in the Battle of Tunisia. He was first taken to a POW camp in Sicily, but was transferred to Camp 59 in late January 1943. In addition to the diary I have ten letters he wrote while at the camp. He was among the mass escapees in September 1943. He eluded capture for several months, but was unable to get through the German lines to freedom. He linked up with Allied forces and was sent to the USA, where he was discharged in poor health in December 1944.