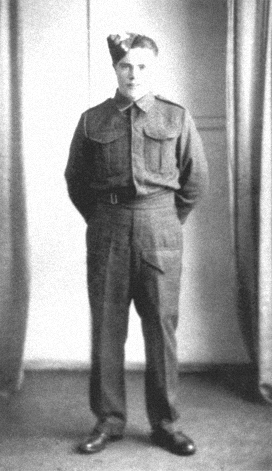 “I wonder if you can help me,” Mary Tretton wrote to me today. “My father died many years ago and never talked about his years in the war. We had no idea he had been a prisoner of war until just prior to our mother’s death.

“At the time you listen, but don’t ask questions—just so many now are running around in my head.

“The only clue I had was many years ago we were discussing places to go on holiday, and I suggested Tunisia. He said, ‘Why would you what to go there, the bowels of the earth.’

“I thought at the time it was a strange thing for Dad to say, but I never asked why.”

We know that Francis “Frank” James Ironside was interned in P.G. 59. He was recorded as such in the Alphabetical List compiled during the war.

Mary wrote, “As far as I know, Dad enlisted—or he might have been conscripted—in 1941 (not sure about the actual dates) and joined the Royal Artillery (RA) as a gunner in an anti-tank regiment. He was deployed into North Africa under Eisenhower as part of Operation TORCH on 10 November 1942, just two days after the invasion was launched.

“This fighting in the desert was brutal and as an anti-tank gunner he would have been in the thick of it on the forward edge of the front line. From what I now know, I’m not surprised he didn’t talk about it much!