Georgina Stewart, daughter of Don Robinson, who was a prisoner in P.G. 59, shared a letter with me that was written by Reverend Nathaniel “Niel” Nye to her mother during the war.

The letter offered reassurance as to the likely current situation of Don Robinson, then missing in Italy after the breakout from P.G. 59 in September 1943. It also offers us insight into the character of Niel Nye, and it provides details about the breakout.

The London Gazette of February 6, 1940 indicates Niel (service number 77267) was granted a commission “for the duration of hostilities with the relative rank of Squadron Leader” on January 18, 1940.

After his capture, Niel was interned in Camp 59.

Here is the text of the letter:

I was delighted to receive your letter as you would have been one of the first I should have written to were it not that I lost my most valuable book of addresses on the trek down to our lines.

I am presuming that your son is the tall Sgt. Robinson in Camp with whom I spent many most enjoyable hours walking and talking about everything under the sun — mostly “When do you think it will all be over”!! He is one whom I very much hope I shall see again soon—in fact he has promised to let me and my wife visit your farm.

END_OF_DOCUMENT_TOKEN_TO_BE_REPLACED 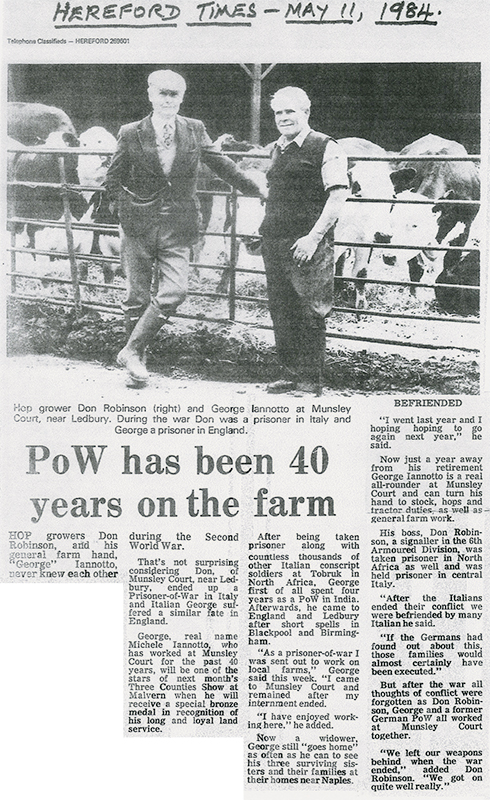 PoW has been 40 years on the farm

HOP growers Don Robinson, and his general farm hand “George” Iannotto, never knew each other during the Second World War.

That’s not surprising considering Don, of Munsley Court, near Ledbury, ended up a Prisoner-of-War in Italy and Italian George suffered a similar fate in England.

END_OF_DOCUMENT_TOKEN_TO_BE_REPLACED 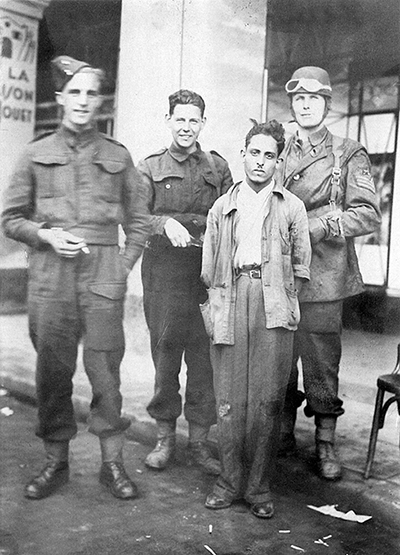 Sergeant Donald George Robinson, Royal Artillery, was captured on January 21, 1943 during a night skirmish with Rommel’s Afrika Korp at Bou Arada in Tunisia. From North Africa, he was transferred to P.G. 59 in Servigliano.

In September 1943, Don escaped with the other prisoners during the general breakout from camp that followed the signing of the armistice.

For several months, he was protected by the Luciani and Dezi families who lived in the countryside near the camp.

Through the help of local partisans, Don returned to Allied control in May 1944.

Don and his wife Monica returned to Italy in the 1960s. They stayed with the Dezi family and visited with members of the Luciani family as well.

Twenty-two years later, Don’s daughter, Georgina Stewart, traveled to the Marche with her husband John. Aided by Ian McCarthy and his wife Gabriella, they succeeded in finding members of both the Luciani and Dezi families.

Georgina recounted this adventure in a story she wrote for the Monte San Martino Trust website. See “Where Donald Robinson Hid.”

Nino Dezi with his wife Josephine. Georgina writes, “As as eight-year-old, Nino used to take food down the hill to my father, who was staying with the Luciani family. When my father and mother visited in the sixties, they stayed with the Dezi family.”