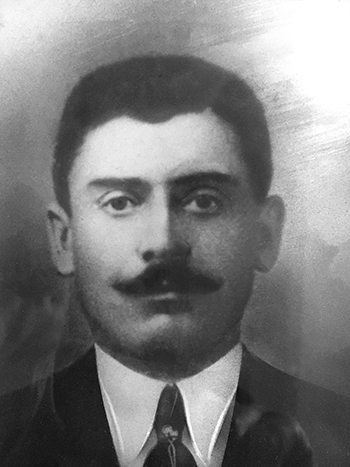 I received an email this week from Maurizio Roscetti, who lives with his wife, Valentina Crescenzi, near the village of Canneto Sabino, between the city of Rome and Rieti.

Maurizio wrote, “I am in possession of a certificate of gratitude signed by Field-Marshall H. R. Alexander, awarded to my wife’s great-grandfather, Crescenzi Sebastiano, called by all ‘Bastiano.’

“I’m a lover of history and I would like to deepen my understanding of the history of this certificate. I was completely unaware of the story behind the certificate until a search on the Internet led me to your site.”

Bastiano lived in Canneto. He was a soldier in the First World War, Maurizio explained. Born in 1885, he was 59 years old in 1943–44. Franco Crescenzi, Bastiano’s son (Valentina’s grandfather), was too young to serve in the Italian army during the Second World War, and Bastiano was too old to fight.

Maurizio wrote, “My father-in-law, Sebastiano—given the same name as his grandfather—said that Bastiano saved a group of English soldiers from an ambush prepared by German soldiers near the city of Fara in Sabina. The English soldiers would certainly have died, if he had not warned them!”

Today, a reminder of the war exists nearby. “Near Canneto there is a street called “the street of the English” (strada degli Inglesi),” Maurizio wrote, “because, during the Second World War, after the liberation of Rome, the Allied forces in order to continue the liberation of North Italy, built a new street where before there was a little muletrack—the English Army had many tanks that needed to pass from there!”

The “Alexander certificates,” signed by Field Marshal Harold Alexander, commander of Allied forces in Italy, were issued to Italians who had risked their lives to protect escaped British POWs and evaders (soldiers evading capture in enemy territory) during German occupation of their county.

This certificate is awarded to Crescenzi Bastiano as a token of gratitude for and appreciation of the help given to the Sailors, Soldiers and Airmen of the British Commonwealth of Nations, which enabled them to escape from, or evade capture by the enemy.