Travis Luther Fowler was born November 21, 1919, in the small town of Sylvester, Georgia.

His father, Jefferson Davis Fowler, was born the year the U.S. Civil War ended. He turned 54 in the year Travis was born. Travis’s mother, Charlotte Maude Mallard Fowler, was 17 years younger and J. D.’s second wife. Travis had 15 siblings—four sisters and 11 brothers (four of them half-siblings).

Like most boys, Travis was given a grammar school education, and then was expected to earn a living and help support his family. He worked at a local mill that produced textiles, likely woven from Georgian cotton. He married Eva Whittington Fowler.

He was assigned to the First Battalion, 18th Infantry Regiment (“Vanguards”). Travis would have little time for deployment preparation, as his battalion departed the New York Port of Embarkation on August 1, 1942, bound for southwest England. On October 22, it left England for the Operation Torch assault on North Africa.

Travis went ashore near Oran, Algeria, on November 8, 1942. His regiment was to see heavy action in the several months ahead. However, for Travis combat ended on the night of December 23–24, when the 2nd Battalion Coldstream Guards, reinforced by the 18th Battalion, met the Germans in the first battle of Longstop Hill and he was captured.

Travis’s Italian POW card in the U.S. National Archives notes he was transferred from Tunisia to P.G. 98 on Sicily, arriving on December 28. His card was not updated after that, but he was certainly transferred to a camp on the mainland Italy. 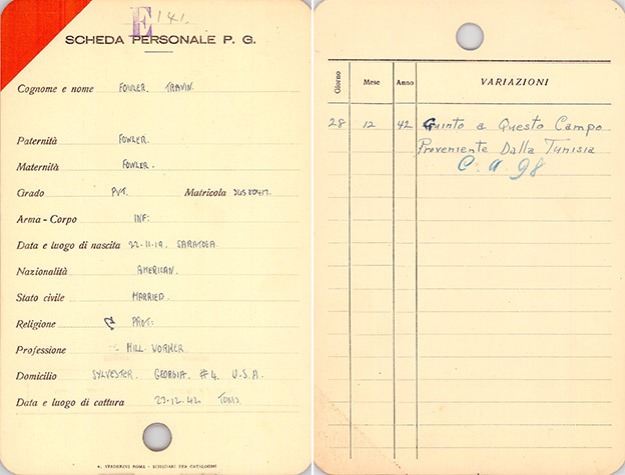 Domenico Mancini lived in Montefalcone (presumably Montefalcone Appenino, a comune located about 16 kilometers south of P.G. 59 in Servigliano. The lion’s share of men Mancini helped had escaped from Camp 59 (one was from P.G. 66, one from P.G. 21 Chieti, and two from Hospital Caserta). Therefore, it seems likely Travis was a P.G. 59 escapee as well.

I have known for years that Travis did not make it home. His POW record at the U.S. National Archives (NARA) indicates he died as a prisoner of war. No internment camp is recorded on the form. Some men listed in this way died while interned; others died while on the run in enemy-occupied territory after escaping camp.

Until recently, that is all I knew about Travis Fowler’s death. Then I received an email from Claudio Ghiotto, who lives in Vo’ (Padua), Italy.

Claudio wrote, “I am researching air war in Padua-Rovigo area 1943–1945, and today, while examining some documents, I was impressed by some concerning Pvt. Travis L. Fowler.

“A query on Google took me to the Camp 59 Survivors website, where there’s an entry: ‘Travis L. Fowler, an American serviceman from Ohio, is listed as having died as a POW. This could mean that he died in captivity or died while on the run in enemy-occupied territory. Perhaps he was one of the Americans murdered in the Comunanza cemetery.’

“So, I think these documents will be of interest to you or someone else. They come from NARA.

“In 2018, at NARA College Park, I wasn’t able to go through the helpers’ files due to lack of time (I had just a little more than a week). They are categorized by the name of the helper, but I have some names of people who, risking their lives or, at the minimum, to be deported to Germany, gave ex-POWs or shot-down airmen, shelter, clothes, and food. In effect, some of the helpers were captured, tortured, and hanged or shot.

“The reports with German information on shot-down aircrews are called ‘Amerikaner Vorgaenge,’ and are available online.” [The record group name is ‘National Archives Collection of Foreign Records Seized, 1675–1958.’]

Claudio continued, “The ‘Amerikaner Vorgaenger’ files, by what I have seen, contain almost exclusively airmen records, and the documents regarding Pvt. Fowler are a remarkable exception.

“I know very well how difficult it is sometimes to find information, and how, in some cases, it comes out magically, totally unexpected.

“There is a record from WO/392/14 (British documents of the War Office) about Pvt. W. N. Haddy, with reference to POW camp 7A (Stalag Moosburg, in Bavaria), and POW number 132807. Evidently, he was transferred to Germany after the second capture.

“In WO 392-21 [the Alphabetical List], Pvt. W. N. Haddy is in Camp No. 120, that is—by the index—Fattoria Biancheto Cetona, province of Siena, Tuscany. He was probably forced into agricultural work. Incidentally, [in the online “List of World War II prisoner-of-war camps in Italy“] Camp No. 120 was the same number assigned to Padua–Chiesanuova, not far from here, but Padua is not in the index. The barracks at Padua–Chiesanuova South were converted from military to POW camp in July 1941, for Croatian and Slovenian people. I don’t know whether at Chiesanuova North the other military barracks were ever used as a POW camp.

“Maybe Haddy and Fowler were not in the same camp, and they met during the escape.”

Here are documents Claudio shared with me: 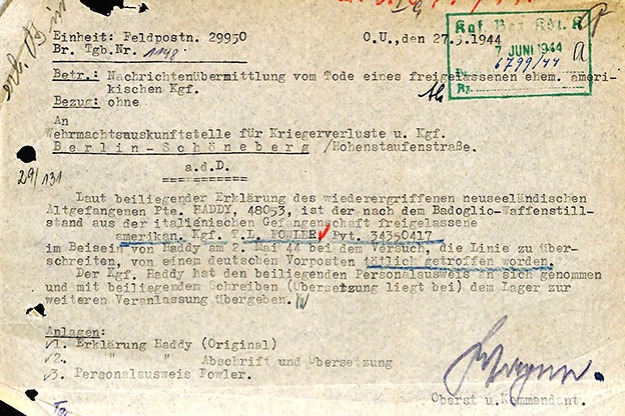 Re: Transmission of news of the death of a former American prisoner of war who was released.
Reference: without

According to the attached declaration by the recaptured New Zealand prisoner Pte. HADDY, 48053, is the American released from captivity in Italy after the Badoglio armistice. Kgf. T. L. FOWLER, Pvt. 34350417 was fatally hit by a German sentry in the presence of Haddy on May 2, 1944 while attempting to cross the line.

Kgf. [Kriegsgefangener, or prisoner of war] Haddy took the accompanying identity card with him to be passed to the camp with the attached letter (translation included) for further action. 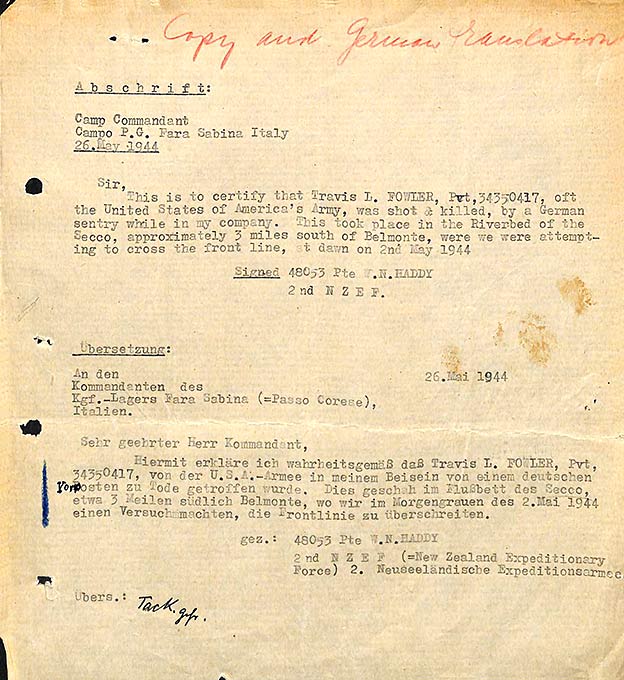 The Rio Secco, where Travis was shot, is east of Caira halfway between Belmonte Castello and Cassino. Sadly, after months on the run, Travis was nearly home. He was about the cross the line to safety when he lost his life.

I am very grateful to Claudio Ghiotto for his help in solving the mystery of what happened to Travis Fowler.

An obituary for Travis appeared was printed in a local newspaper at the time of his burial:

Funeral services, for Private Travis L. Fowler, who was killed in action in Italy May 2, 1943 [sic], were held Wednesday afternoon at Providence Church at 2:30 o’clock with the Rev. Dexter Wilson officiating. Internment followed in the church cemetery.

Pallbearers were members of the V. F. W. and American Legion.