I heard earlier this fall from Don Knibbs, who lives in the village of Sheet, which is in Hampshire, in the south of England. He wrote:

“I came across the Camp 59 Survivors web site today. What a great shame my dad isn’t still here to have seen it. He was Trooper Harold George Knibbs of the Royal Armoured Corps (RAC).

“I’m afraid I don’t know the dates for when he was at each of the camps. I know from his records that he was still in Italy in 1943, but be was transferred to Stalag IVB at some time before Christmas 1944. I’m guessing that will have been after the Italians capitulated in September 1943. 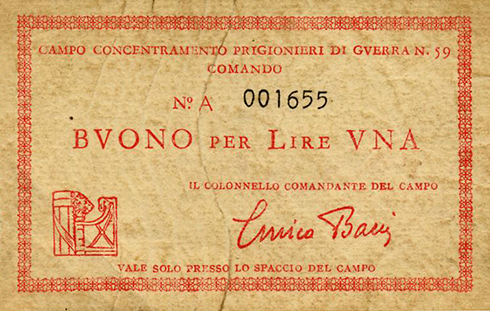 “He had very few mementoes of the times, but amongst his many treasures was a currency note from Camp 59 (above).

“Harold did tell me of a few of his lighter experiences when he was a prisoner of war. He was extremely proud of the fact that when he and his colleagues were captured he was the last amongst them to be de-loused. He managed to avoid it for several days but eventually they got to him and gave him the full treatment, which I believe was a good dusting with de-lousing powder and a complete head shave.

“He never spoke to me about life in the prison camps, other than to say that quite often they were very hungry. But during the bad times, he said all they had to do was to look at the conditions that the Russian troops were being kept in and realize how bad things could be, and that life as a British prisoner-of-war wasn’t so bad.

“He also told me of several escape attempts, but from which of the three prisons, I’m not sure.

“For one, he was partially successful and escaped from the camp. They were traveling by night and on one dark night they could see a patrol coming along the road towards them. Quick as a flash they all took to their heels to hide in a field. Harold dived over a hedge, ran to what he assumed was a haystack, and dived in—only to find that the haystack was in fact a manure heap. That was one occasion when he was glad to be recaptured.

“At a second attempt, they tried to tunnel out. They had been tunneling for several weeks when they suddenly came across something quite solid. They found it was a brick construction, managed to break through, only to find that they were off course and the tunnel led them into the cellar of a nearby building which had been abandoned.

“The cellar was stocked with bottles of wine and boxes of various household goods. They helped themselves to the wine, got pretty drunk, looted all the goods in the cellar and went back to the camp. Harold came away with a couple of silver knives, forks, and spoons, and a hand embroidered linen tablecloth—and a hangover, no doubt.

“After another escape, he and his colleagues managed to avoid capture by hiding in a pig sty quite some distance from the prison camp, where they remained for 13 weeks, living at the back of the sty and relying on the farmer to deliver food scraps to the pigs which they managed to steal from the pigs in order to survive.

“After reading much of your web site on the day I found it, I was able to fill in many of the gaps in my own mind about my father’s experiences during his time in captivity. He didn’t speak much at all of his wartime experiences, and for my own part, from a very young age I had it drummed into me by dad’s older sister that I must never, ever mention the war to my dad. As a consequence, I never did. As I grew older, it seemed inappropriate to suddenly mention it, and then, before you know it, it’s too late.”

I wrote back to Don with some comments and a few questions, to which he replied,

“The information on your site made me recognise that my dad was probably at Camp 59 first and then moved on to Camp 73. He didn’t ever elaborate on his escape attempts, but I assume that the 13-week spell in the pig sty was immediately following the September ’43 armistice. From what he told me, I imagined it was just him and one other who hid there.

“I suspect that the pig owner knew they were there. I remember dad saying there might be an apple or something good, and they’d have to fight to grab it before the pigs got it. I remember thinking at the time how strange to throw an apple to the pigs. Dad always kept a pig after the war, and I remember they just got the left over scraps—never the luxury of a whole apple.

“I imagine the length of time they were actually free—13 weeks—would sort of fit in with the circumstances of around that time.

“I’ve always imagined his story of tunnelling out of a camp was related to Stalag IVB in Germany, rather than the Italian camps. He did actually bring home the silver cutlery he’d looted (just a knife, fork, and spoon) and a very simple hand-embroidered tablecloth. It was just plain white with a green pattern embroidered onto it. He was conned out of the cutlery several years before he died by one of these people who knock the doors of elderly people seeing what they can talk them out of. He told dad there’s no value in German silver and the guy paid him £1 for each of the items. My sister still has the tablecloth.

“I still have dad’s Army Pay Book, a few maps of North Africa showing routes that I assume he took in his tank. There are no letters, but several photographs that he received whilst a prisoner. He used to record on them when they were posted from England and when he received them.

“Prior to the war, dad was a baker—or at least, a baker’s assistant. After the war, he tried for a job as a welder at a factory called Thorneycroft, famous for it’s production of military vehicles, in his home town of Basingstoke, Hampshire. He didn’t get it, but instead got a job as a field engineer for an agricultural engineering company called Fred Smith’s. He had a van full of tools, and travelled around the south of England repairing farm machinery. He worked up through the organisation, ending up as the service manager when he retired.

“I have family history as one of my interests, and have pages dedicated to my dad: a little of his history prior to the war, and more specific information about his time in the army.”