Eddy Arnold’s Back Home Again in Indiana, one of the state’s most beloved songs, is an expression of sweet, sad longing for a return to the past—to youth and the comfort of a loving rural home.

The song has had a special resonance for me and many others here in Indiana this week, as the state welcomed home a native son, U.S. Army Air Forces’ 1st Lieutenant Robert McIntosh. Robert was killed in Italy during the Second World War.

The 21 year old pilot was on his way back to base from a strafing mission against an enemy airfield in Piacenza, Italy, on May 12, 1944 when his aircraft went missing.

Robert’s remains were flown to Indiana on Tuesday.

A public funeral will be held today at the Tipton High School auditorium, and burial with full military honors will follow.

You can watch a memorial video that aired Tuesday on 13 WTHR Indianapolis on the channel’s website, wthr.com.

Also, read a story about Robert’s life and the return to Indiana by the Fort Wayne Journal Gazette. 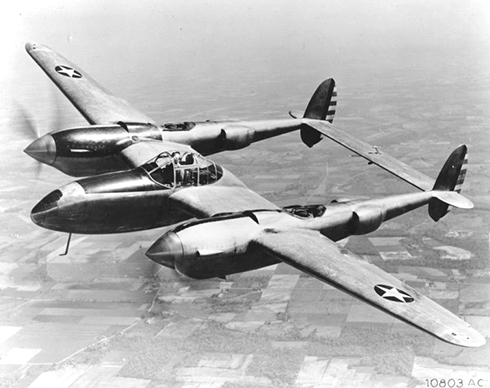 Robert McIntosh was flying a single-seat P-38 Lightning aircraft, as shown here, before he was reported missing in action. Photo—United States Air Force

Listen to an arrangement of Back Home Again In Indiana by Straight No Chaser. The professional a cappella group began at Indiana University, where Robert was a student before enlisting in the Army.