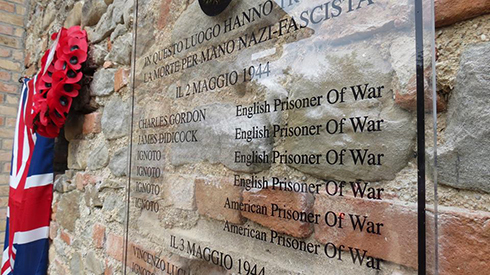 In the Italian village of Comunanza last Sunday, May 15, a plaque was installed to commemorate the killing of escaped Allied prisoners of war in 1944.

See “An Execution at Comunanza” on this site.

The men killed were English, American, and Scottish (Private Charles Gordon was from Gartochorn, Dunbartonshire, and Driver James Didcock was from Bridgend, Linlithgow—both in Scotland, although the official military inquiry into the case referred to them simply as “British soldiers.”

To the best of my knowledge, some of the dead to this day remain unidentified.

Attendants at the memorial ceremony

For other photos of the dedication, visit the La Casa della Memoria Facebook post regarding the ceremony.

2 thoughts on “Dedication in Comunanza”