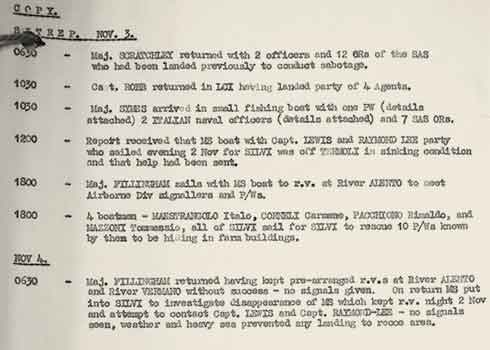 Two years ago my friend researcher Brian Sims sent me a series of I.S.9 rescue operation diaries and situation reports from 1943–44 that he had copied in the British National Archives.

These documents give a detailed day-to-day (in some cases hour-to-hour) account of I.S.9 rescues of escaped POWs and evaders.

He has transcribed the reports and added clarifications and additional information. Here is the first of a series of these document transcriptions that I will add to this site over the next several weeks.

I am grateful to Luigi for his careful attention to these documents.

0630 – Maj. SCRATCHLEY returned with 2 officers and 12 ORs [other ranks] of the SAS [Special Air Service] who had been landed previously to conduct sabotage.

[Note from Luigi Donfrancesco. The four agents were: Uguccione RANIERI di Sorbello; Catholic Priest “Don” Domenico ORLANDINI (cover name “Carlo”); Ermanno FINOCCHI; and Andrea SCATTINI. From TERMOLI, they were landed at CUPRA MARITTIMA in the night of November 2, 1943. In her Diaries (published by Alessandro Perini) “Babka” says they arrived at 2:30 a.m. on November 3 at “Villa Boccabianca” (property of Count Zeno Vinci, Babka’s husband, and base of the “RATBERRY LINE – RAT LINE”), joining there Agent Fausto SIMONETTI, who was previously landed with “GUIDO” on October 22 and who had been waiting for them since October 29].

[Note in the entry below apparent misspelling of Italian names. Suggested corrections are in brackets.]

1800 – 4 boatmen – MAESTRANGOLO [probably MASTRANGELO] Italo, CORNELI Carmene [Carmine], PACCHIONO [the correct spelling could be PACCHIANO, PACCHIONE, or PACCHIONI] Rimaldo [Rinaldo] and MAZZONI Tommassio [Tommaso], all of SILVI, sail for SILVI to rescue 10 P/Ws [prisoners of war] known by them to be hiding in farm buildings.

0630 – Maj. FILLINGHAM returned having kept pre-arranged r.v.s. [rendezvous] at River ALENTO and River VERMANO without success – no signals given. On return [of] MS put into SILVI to investigate disappearance of MS which kept r.v. [rendezvous] night 2 Nov. and attempt to contact Capt. LEWIS and Capt. RAYMOND-LEE – no signals seen, weather and heavy sea preventing any landing to recce [reconnaissance] area.