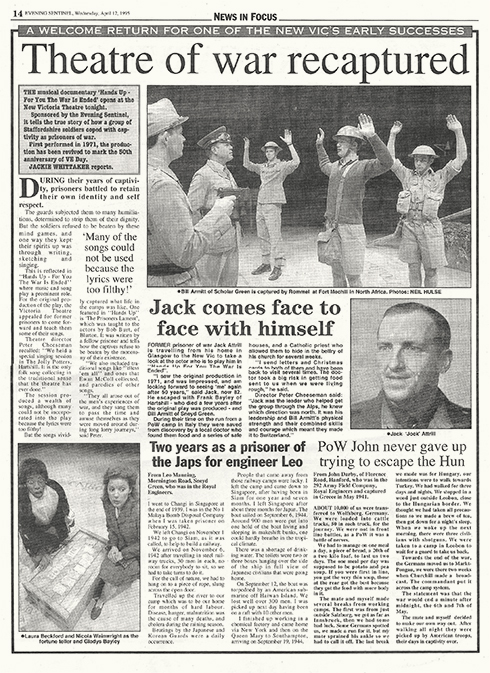 This is the last of three news articles from the Evening Sentinel (Stoke-on-Trent, England) covering a 1995 revival of the New Vic Theatre’s 1971 original musical documentary, Hands Up! For You the War Is Ended.

See also “Hands Up—For You the War Is Ended!,” “More on the Camp 59 Theatre Subjects,” “Prisoners of Experience,” and “Revived Play ‘the Voice of a Community’.”

Bill Armitt of Scholar Green in captured by Rommel at Fort Mechili in North Africa (top image), and Laura Beckford and Nicola Wainwright as the fortune teller and Gladys Bayley (above left) Neil Hulse, photographer

THE musical documentary ‘Hands Up – For You The War Is Ended’ opens at the New Victoria Theatre tonight.

Sponsored by the Evening Sentinel, it tells the true story of how a group of Staffordshire soldiers coped with captivity as prisoners of war.

First performed in 1971, the production has been revived to mark the 50th anniversary of VE Day.

DURING their years of captivity, prisoners battled to retain their own identity and self respect.

The guards subjected them to many humiliations, determined to strip them of their dignity. But the soldiers refused to be beaten by these mind games, and one way they kept their spirits up was through writing, sketching and singing.

This is reflected in “Hands Up – For You The War Is Ended” where music and song play a prominent role. For the original production of the play, the Victorian Theatre appealed for former prisoners to come forward and teach them some of their songs.

Theatre director Peter Cheeseman recalled: “We held a special singing session in The Jolly Potters, Hartshill. It is the only folk song collecting in the traditional sense that the theatre has ever done.”

The session produced a wealth of songs, although many could not be incorporated into the play because the lyrics were too filthy!

But the songs vividly captured what life in the camps was like. One feature in “Hands Up” is ‘The Prisoner’s Lament’, which was taught to the actors by Bob Burt, of Blurton. It was written by a fellow prisoner and tells how the captives refused to be beaten by the monotony of their existence.

“We also included traditional songs like “Bless ’em all” and ones that Ewan McColl collected, and parodies of other songs.

“They all arose out of the experiences of the men’s experiences of war, and they sang them to pass the time and amuse themselves as they were moved around during very long lorry journeys,” said Peter.

Jack comes face to face with himself

FORMER prisoner of war Jack Attrill is traveling from his home in Glasgow to the New Vic to take a look at the actor who is to play him in “Hands Up – For You The War Is Ended”.

“I saw the original production in 1971, and was impressed, and am looking forward to seeing ‘me’ again after 50 years.” Said Jack, now 82. He escaped with Frank Bayley of Hartshill – who died a few years after the original play was produced – and Bill Armitt of Sneyd Green.

During their time on the run from a PoW camp in Italy they were saved from discovery by a local doctor who found them food and a series of safe houses, and a Catholic priest who allowed them to hide in his belfry for several weeks.

“I send letters and Christmas cards to both of them and have been back to visit several times. The doctor took a big risk in getting food sent to us when we were living in the rough,” he said.

Director Peter Cheeseman said: “Jack was the leader who helped get the group through the Alps, he knew which direction was north. It was his leadership and Bill Armitt’s physical strength and their combined skills and courage which meant they made it to Switzerland.”

Two years as a prisoner of the Japs for engineer Leo

From Leo Manning, Mornington Road, Sneyd Green, who was in the Royal Engineers

I went to Changi in Singapore at the end of 1939. I was in the No 1 Malaya Bomb Disposal Company when I was taken prisoner on February 15, 1942.

We arrived on November 6, 1942 after traveling in steel railway trucks, 30 men in each, no room for everyone to sit, so we had to take turns to do it.

For the call of nature, we had to hang on to a piece of rope, slung across the open door.

Travelled up the river to our camp which was to be our home for months of hard labour. Disease, hunger, malnutrition, was the cause of many deaths, and cholera during the raining season.

Beatings by the Japanese and Korean guards were a daily occurrence.

People that came away from those railway camps were lucky. I left the camp and came down to Singapore, after having been in Siam for one year and seven months. I left Singapore after about three months for Japan. The boat sailed on September 6, 1944. Around 900 men were put into one hold of the boat living and sleeping in makeshift bunks, one could hardly breathe in the tropical climate.

There was a shortage of drinking water. The toilets were two or three boxes hanging over the side of the ship in full view of Japanese that were going home.

On September 12, the boat was torpedoed by an American submarine off Haiwan Island. We lost well over 300 men. I was picked up next day, having been on a raft with 10 other men.

I finished up working in a chemical factory and came home via New York and then on the Queen Mary to Southhampton, arriving on September 19, 1944.

PoW John never gave up trying to escape the Hun

From John Darby, of Florence Road, Hanford, who was in the 292 Army Field Company, Royal Engineers and captured in Greece in May 1941.

ABOUT 10,000 of us were transferred to Wolfsberg, Germany. We were loaded into cattle trucks, 50 in each truck, for the journey. We were not in front line battles, as a PoW it was a battle of nerves.

We had to manage on one meal a day, a piece of bread, a 20th of a two kilo loaf, to last us two days. The one meal a day was supposed to be potato and pea soup. If you were first in line, you got the very thin soup, those at the rear got the best because they got the food with more body in it.

The mate and myself made several breaks from working camps. The first was from just outside Salzburg, we got at far as Innsbruck, then we had some bad luck. Some Germans spotted us, we made a run for it, but my mate sprained his ankle so we had to call it off. The last break we made was for Hungary, our intentions were to walk toward Turkey. We had walked for three nights and days. We had stopped in a wood just outside Leobon, close to the Hungarian border. We thought we had taken all precautions, so we made a brew of tea, then got down for a night’s sleep. When we woke up the next morning, there were three civilians with shotguns. We were taken to a camp in Leobon to wait for a guard to take us back.

Toward the end of the war, the Germans moved us to Markt-Pongau, we were there two weeks when Churchill made a broadcast. The commandant put it across the camp system.

The statement was that the war would end a minute after midnight, the 6th and 7th of May.

The mate and myself decided to make our own way out. After walking all night they were picked up by American troops, their days in captivity over.