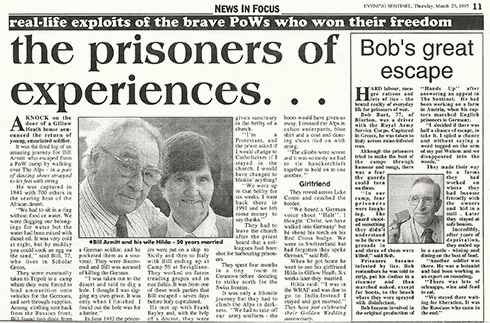 A recent post on this site was dedicated to a 1971 theatrical production of the Victoria Theatre (Stoke-on-Trent, England) entitled Hands Up! For You the War Is Ended.

The musical documentary was based on the real-life experiences of several Staffordshire WW II ex-POWs.

Nigel Armitt’s father, Bill Armitt, was one of those veterans, and my access to the playbill for the production was courtesy of Nigel.

Nigel has since brought to my attention that in 1995 the theatre, now called the New Vic, staged a revival of the play to commemorate the 50th anniversary of VE Day. Nigel sent three news clippings, from March and April 1995, which revisit the former troops’ stories and cover the play itself.

Here is the first of the three articles:

real life exploits of the brave PoWs who won their freedom

the prisoners of experiences…

A KNOCK on the door of a Gillow Heath house announced the return of a young, emaciated soldier.

It was the final leg of an amazing journey for Bill Armitt who escaped from a PoW camp by walking over the Alps – in a pair of dancing shoes strapped to his feet with string.

He was captured in 1941 with 700 others in the searing heat of the African desert.

“We had to sit in a ring without food or water. We were flogging our belongings for water but the water had been mixed with diesel oil. It was very cold at night, but by midday you could cook an egg on the sand,” said Bill, 77, who lives in Scholar Green.

They were eventually taken to Tripoli to a camp where they were forced to load ammunition onto vehicles for the Germans, and sort through supplies. Among clothing sent back from the Russian front, Bill found two discs from a German soldier, and he pocketed them as a souvenir. They were discovered and Bill was accused of killing the German.

“I was taken out to the desert and told to dig a hole. I thought I was digging my own grave. It was only when I finished I found out the hole was for a latrine.”

In June 1942 the prisoners were put on a ship to Sicily and then to Italy with Bill ending up at Camp 59 at Servigliano. They worked on farms treading grapes and in rice fields. It was from one of these work parties that Bill escaped – seven days before Italy capitulated. He met up with Frank Bayley and, with the help of a doctor, they were given sanctuary in the belfry of a church.

“I’m a Protestant, and the priest asked if I would change to Catholicism if I stayed in the church. I would have changed to blinkin’ anything!

“We were up in that belfry for six weeks. I went back there in 1991 and left some money to say thanks.”

They had to leave the church after they heard that a colleague had been shot for harbouring prisoners.

They spent four months in a tiny room in Caranova before deciding to strike north for the Swiss frontier.

It was only a 30-mile journey but they had to climb the Alps in darkness. “We had to take off our army uniform – the boots would have given us away. I crossed the Alps in calico underpants, blue shirt and a coat and dancing shoes tied on with string.

“The climbs were severe and it was so misty we had to tie handkerchiefs together to hold on to one another.”

They rowed across Lake Como and reached the border.

“We heard a German voice shout ‘Halt.’ I thought ‘Christ, we have walked into Germany’ but he shown his torch on his Red Cross badge. We were in Switzerland but had forgotten they spoke German,” said Bill.

When he got home he went to see his girlfriend Hilda in Gillow Heath. Six weeks later they were married.

Hilda said: “I was in the WRAF and was due to go to India. Instead I stayed and got married.” They have just celebrated their Golden Wedding anniversary.

Hard Labor, meagre rations and lots of lice – the brutal reality of everyday life for prisoners of war.

Bob Burt, 77, of Blurton, was a driver with the Royal Army Service Corps. Captured in Greece, he was taken to Italy across mine-infested seas.

Although the prisoners tried to make the best of the camps through humour and songs, there was a fear the guards could turn on them.

“In one camp, four prisoners were laughing. The guard shouted something they didn’t understand so he threw a grenade in and three of them were killed,” said Bob.

Prisoners became infested by lice. Bob remembers he was told to strip, put his clothes in a steamer, and then marched naked, except for boots, to the beach where they were sprayed with disinfectant.

Bob became involved in the original production of “Hands Up” after answering an appeal in The Sentinel. He had been working on a farm in Austria, when his captors marched English prisoners to Germany.

“I decided if there was half a chance to escape, to take it. I spied a chance and without saying a word tugged on the arm of my pal Watson and we disappeared into the woods.”

They made their way to a farm they had worked on where they had become friendly with the owners and hid in a mill. Later they stayed at safe houses.

Incredibly, after years of deprivation, they ended up in a castle – wining and dining on the best of food.

“Another soldier was there. He was a botanist and had been working as an expert of reseeding.

“There was lots of schnapps, wine, and food to eat.

“We stayed there waiting for liberation. It was the Russians who came in the end.”