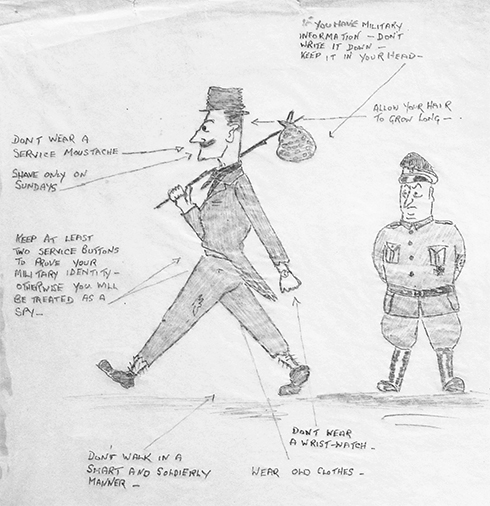 A detail of a cartoon entitled “Aids to Escape.” See two such cartoons at the end of this post. The originals are archived with A Force bulletins at the British National Archives. I cannot say whether they were ever reproduced for general distribution.

The following two A Force bulletins address ways in which Allied escapers and evaders in Italy might avoid confrontation. Bulletin No. 7 specifically addresses “force-landed airman,” while Bulletin No. 8 mentions escapers from Italian camps and seems to address escapers and those evading capture alike.

Keep in mind that this document was written in the months before the capitulation of Italy and the subsequent general escape/release of prisoners from Italian prison camps into enemy-occupied territory. By late September, central and northern Italy was flush with escaped POWs.

Thanks to researcher Brian Sims for access to these documents.

Now that the invasion of the “Axis Fortress” has begun it is, perhaps, worthwhile to take advantage of certain well known characteristics of the Italian people. It is not known what percentage of rural Italians are pro-Fascist but it is safe to assume that many who are luke warm on the subject are giving it very serious thought these days. The knowledge that Italy has lost the war must be filtering through in spite of Axis propaganda.

The following advice to forced-landed airman has a very good chance of being useful.

1. Forced landed airman are advised to follow the preliminary procedure for such happenings in Occupied Countries, that is, to get away from their planes, as far and as quickly at possible, hide their chutes and themselves until the search for them has died down. Then approach a poor, lonely farm house; the poorer and lonelier the better. Scan it carefully to make sure the farmer and/or his wife are alone; tell them you are an American or British airman and if they help you they will be rewarded when the Allies arrive and that you will make sure they will be well treated. If there is no language difficulty try to convince them that the war is lost for Italy and that by helping you they are giving themselves a safeguard that will be to their advantage when the Allied Force reach them. The sentence appearing at the bottom of this bulletin may be coped and carried on your person. Perhaps a suggestive gesture with your pistol will help to convince them. You should keep a constant lookout for treachery.

2. Remember that until you have been taken prisoner or have assumed a disguise you are entitled to carry on the war at your discretion. Discretion is, however, advised.

3. It is known that “Black Market” operators play between the heel of Italy and Albania. There are considerable Albanian minorities living in the heel of Italy. They have no cause to be pro-Fascist and recent developments must also have made them more willing to do something to put themselves in the good graces of the Allied Powers. If you succeed in getting help from them and possibly a passage to Albania, make your way to the eastern side of the Greek Peninsula where it is certain that you will be given help if you follow the rules of behavior.

4. Albanians are Moslems and may be recognized by the Tarbush or Fez and baggy trousers, which they generally wear.

6. Action of forced-landed airmen should depend upon the day to day developments preceding their being forced down. For example, anyone landing in Sicily not too far behind the battle lines, obviously should not make for the northern end of the island. They should either try to get through the lines or hide in a desolate spot until the Allied forces overrun them. Similarly, if, in the near future, the Allies conquer Sicily and you are forced down in southern Italy, the strategy would be to make for the southern tip of the “Toe” and try to get across the Strait of Messina.

The bulletin contains a list of “useful Italian phases and words to know”:

Will you help me? / Volete aiutarmi?

I have some money to pay you / Ho denaro per pagarvi

I am hungry / Ho fame

I will see that you are protected when the Allied arrive. / Avro cura che sarete protetto quando arriveranno gli Alleati.

Will you hide me? / Volete mascondermi?

The Allied are your saviours. / Gli Alleati sono i vostri salvatori

How many kilos to – / Quanti kilometri a –

1. Watch out for towns where a curfew is in force.

2. All bridges on the Italian mainland are guarded by territorial personnel. Important bridges of any length have two sentries at either end. These are doubled at night. A stretch of road on which there are a number of bridges are usually guarded by one company, personnel returning to the company camp when off duty.

All bridge posts as well as road blocks are in telephonic contact with the common post or else have an electric arm bell.

Sentries are armed with rifles and hand grenades and sometimes an L.M.G. [light machine gun]

Very important bridges may have an M.G. [machine gun] emplacement at either end.

3. Railway tunnels are guarded, at least, as well as bridges.

4. Civilian males do not have to carry documents providing exception from military service.

Reliable information has been received to the effect that Escapers from Italian Prison Camps are receiving active help from Italian peasants. Reference is made to our previous bulletin in which suggested procedure was outlined.

The text above is only the portion of Bulletin No. 8 that covers Italy. Additional sections address situations in Greece and Spain. 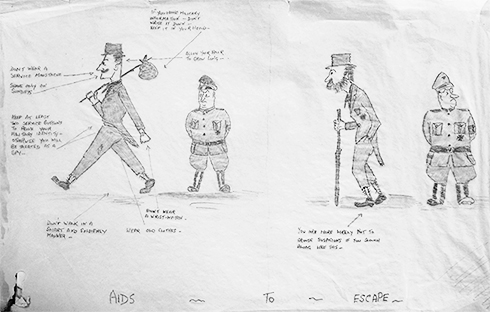 Allow your hair to grow long

Shave only on Sundays

Don’t walk in a smart and soldierly manner 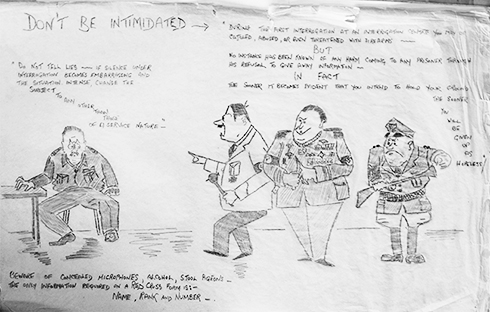 Do not tell lies—if silence under interrogation becomes embarrassing and the situation intense, change the subject to any other than those of a service nature