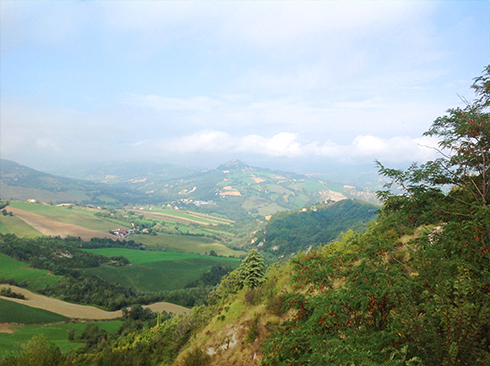 The stunning Italian countryside near Servigliano.

Ed Cronin and his wife Susan of Fitchburg, Massachusetts, visited Servigliano in September in order to see the site of Camp 59, where Ed’s father, Clarence “Tom” Cronin, was a prisoner of war during WW II. (See “A Son’s Memories of Tom Cronin.”

Ed and Susan were guests of Anne Copley and David Runciman, who own a home in Montefalcone, not far from Servigliano.

I asked Ed to send me photos and to share some of his impressions of the visit for this site.

“The first thing that I was struck by was how isolated the camp was.” Ed told me. “It was way up in the mountain region. Even today, there is only one road that I know of that goes up the mountain and it is narrow and slow going. I can only imagine what it was like during the war era—probably little more than cart roads.

“I would think that being so far away could be very disheartening and challenging for a prisoner who wanted to escape. There must have been a tremendous contrast in weather from the hot summer season to the winter mountain weather. I can see why the local villagers played such a part in the survival of many who did escape.”

Camp 59, from the perspective of the front gates. 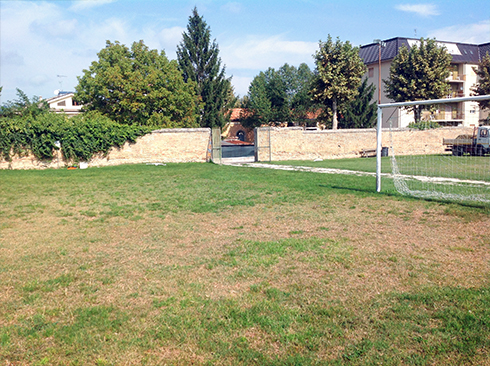 The side gate of the camp. The terracotta-roofed building outside the wall is the old train station, now a museum and education center for Casa della Memoria (“House of Memory”), the camp’s historical association.

The camp as viewed from the back wall, looking toward the main entry gates.

Ruins of a brick structure built into the back wall.

Inside the camp’s back wall.

The foundation of a razed building, perhaps one of the prison huts.

“Anne and David showed me the placement of one of the guard towers outside the wall and its proximity to the ‘dead line’ that was set up in the inner perimeter of the camp. My father told me a story of how one guard would throw food in the dead line area to see if a prisoner would try to get the food and risk his life.

“I think the nicest part of the visit was seeing all the children running and playing in the field today—the soccer field especially. It is good that this place of suffering has been revitalized today with the peace and joy of the young people who now live in the region.”

This diorama in the museum was created by school children. It represents the camp at its largest phase, during WW I. During WW II only the front half of the camp was used to house prisoners. See photographs and a diagram of the camp at “Twenty-five Years After the Escape.”

After the visit to the camp and museum, the group traveled to the spot on the road outside Montelparo where British Signalman Sidney Seymour Smith was murdered by Germans and Fascists who were trailing escapees. (See “Sidney Seymour Smith—A Mystery Solved.”) A plaque marking the spot had been installed there last May during the Tenna Valley Freedom Trail Walk. (See “Raimondo Illuminati on Sidney Seymour Smith.”)

For decades fresh flowers have been left by residents of Montelparo at the iron cross that marks the spot where Sidney Smith was killed. The poppy wreaths were left by Freedom Trail walkers in May.

Ed wrote, “I was very touched by the monument to Giorgio. When I read the inscription in the plaque I found it not only honored him and his memory but all POWs who were in Italy and it praised them for their heroism. For me that was a very emotional moment, having grown up with a father who had suffered so much from the war and seeing how what he had done was so little appreciated back here in the U.S. I also feel a sense of anger because many of the surviving prisoners brought back very deep emotional wounds that were never recognized.

“I recently read that in WW II only 19 percent of the six-million-plus who served actually saw some form of combat. My father was captured in combat. He surrendered with his group to the Germans at Long Stop Hill in Tunisia after they were outgunned and ran out of ammunition. Personally, the man never spoke in an outwardly patriotic manner of “flag waving” and American military strength. He was appalled by what he had been through and what he had seen, and had no use for places like the American Legion and DAV posts. Frankly, I think that many of the people who frequent these places fell into the 81 percent who never experienced what he and others had gone through.

“It would be great if a monument would be put at the camp to the courage and heroism of all the Allied prisoners, including the ones who died there.”