This news article from the London area Ham&High newspaper is provided by Anne Copley. It’s the touching story of a contact made between the family of POW Sydney Swingler, known to the Italians as “Antonio,” and his Italians protectors, the Antognozzi family.

The familes of a Second World War soldier from Kentish Town and the Italian peasants who risked their lives to save him have been united after 70 years.

The children of Sydney Swingler have made contact with the Antognozzi family, who protected their father for several months during the war, after an amateur historian and the Ham&High helped bring them together.

Sydney was among the thousands of fighters who fled prisoner-of-war camps after Italy signed an armistice with the Allies in September 1943, then took refuge with Italian peasants as the countryside remained in turmoil.

He was sheltered by the Antognozzi family in the Italian village of Montelparo, where they still live, before eventually making it back across Allied lines and returning to his Kentish Town home.

Sydney’s son Colin Swingler, 64, one of four siblings born at the former family home in Highgate Road after the war, said he was delighted to make contact with the Antognozzi family, who had risked their lives to look after his father.

He said: “If the Germans or Italian fascists had found dad, they could have been killed along with him.

“My family owes them a great debt – if my father had not come back, none of us would be here.”

Last month the Ham&High was contacted by Anne Copley, a lawyer and amateur historian who has a house in Italy and a keen interest in the “untold story” of the thousands of Allied soldiers given refuge by Italian peasants.

She was asked for help by the Antognozzis after unearthing the identity of another British soldier, who was killed by the SS when discovered on a farm not far from Montelparo. [See “Sidney Seymour Smith—A Mystery Solved.”]

The family were keen to trace Sydney – although they knew him as Anthony or perhaps even Antonio Swingler – using only a photo of his half-sister Doris and its inscription, which gave the Highgate Road address.

The memento had been kept safe for 70 years by Gino Antognozzi.

It was handed to him as a parting gift, after he accompanied Sydney as a 17-year-old on his journey through the Italian countryside toward Allied lines.

The Ham&High published an article which was shared on on-line forums for Second World War and genealogy enthusiasts, who helped Ms Copley to track down Colin.

The retired band manager, who now lived in St Albans, Hertfordshire, revealed that his father also kept a photo of Gino, which was one of his “prized possessions”.

However, when Sydney died in 1993, his children knew little about his time in the Italian countryside because he was reluctant to talk about the war.

Now Colin hopes to visit Italy to thank Gino, now 88, and his family in person – and to find out more about his father’s secret wartime experiences.

Gino has already revealed that he dug out a cave for Sydney, where he was forced to shelter at times to evade Italian fascists.

Colin, meanwhile, was also able to confirm that his father had survived the war – the Antognozzi family had no idea what became of him – before starting a family and becoming a delivery driver and then a depot manager.

Ms Copley, 59, said: “I spoke to Gino’s nephew Alfredo over the phone, and he said Gino was extremely moved.

“I feel I have done what I set out to do – I have found this family and put them in touch.”

The photos that accompanied the article, as well as other Swinger family photos, are below.

This postcard photo of Gino Antognozzi is dated 9th July 1944. 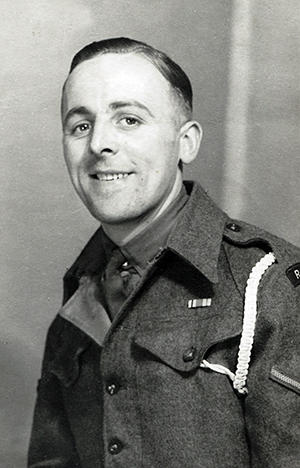 Sydney Harold Swingler in the 1940s.

Sydney’s half-sister Doris Titheradge. As a dancer, Doris toured with her best friend in a double act with the Entertainments National Service Association (ENSA). She may also have performed with the Tiller Girls. The photo has two inscriptions on back. The first reads, “Luck, Love to Syd. Always, Doris xx. 26/8/41.” The second inscription reads, “SALUTE. SEMPRE RECORDO ME. ANTONIO. TO MY VERY GOOD FRIENDS. SIGNORIE.ANTHONY.SWINGLER. 74. HIGHGATE ROAD. LONDRA N.W.5. INGHILTERRA.”

Sydney Swingler and Joan Saxton on their wedding day, August 2, 1945. 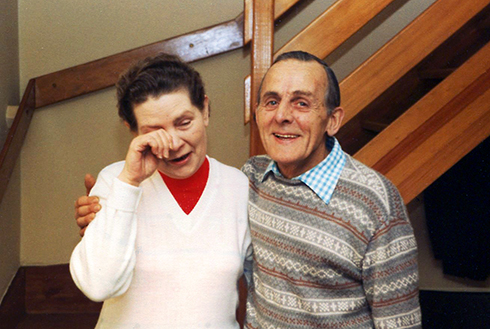 Sydney and Joan on their ruby wedding anniversary in 1985.

The Swingler family, circa 1991. Sydney’s sister Doris is seated beside him at center, nearest the camera.