This is the fourth part in a series of posts concerning Italians who served as agents for I.S.9 (Intelligence School 9 of the Central Mediterranean Force).

I.S.9′s chief mission was support and rescue of escaped POWs and evaders (E&Es) stranded in enemy territory. I.S.9 was a division of M.I.9 (British Directorate of Military Intelligence Section 9), a department of the War Office during WW II.

I am grateful to researcher Brian Sims for providing access to his collection of I.S.9 files from the British National Archives for this series.

Antonio was a bricklayer at Castellaneta. He was called up to serve in the Army on March 12, 1940. He served in the infantry and joined the parachutists.

He served in Italy, Croatia (for two months), and Sicily. At Armistice, he was in Calabria with the Nembo Division of the Italian Army. He volunteered for A Force service, and joined N Section at Palese in the capacity of para-guide on December 11, 1943.

He was issued a false Carta d’Identita for Foggia in the name Antonio Stasi, muratore.

He ceased to be employed on May 15, 1945 because of lack of work due to conclusion of hostilities. He was paid off by Field Headquarters and sent to Bari on May 16, and then to proceed to Taranto for four weeks leave. Thereafter he was to report to the Italian authorities.

No photograph available. Alcide is described as having a height of 1.70 meters, brown eyes, black hair, beard, medium build, and fresh complexion.

His wife, Addolorata Cervellini, is listed as his next of kin.

He was the skipper on the Budrindo.

For more on the Budrindo, see “Venice One” under “The Boating Section, Termoli” in “I.S.9 History—Operations in Italy, Part 2.”

Alcide’s qualifications are stated simply as, “Has fished on this coast all his life.”

He was employed by N Section, A Force on January 24, 1944 in the capacity of skipper.

He used his own name during employment and no false identity papers were issued to him. 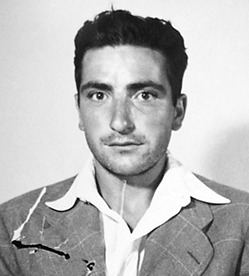 Vittorio was educated at Scuola Tecnica, Naples, 1935–37. He served in the Italian Army 1937–39 and was recalled in 1940. He served in Africa and was captured at Enfidaville, Tunesia, in April 1943. He was recruited for special service from his prisoner-of-war camp at Souk Ahras in July 1943.

Vittorio was employed by Colonel Huffer, Advanced Headquarters, A Force in Algiers, as an agent beginning in mid-August 1943.

He was held very good local knowledge of the Naples area.

Names used during employment were Francesco Bianchini and “Bambino.”

He ceased to be employed in May 30, 1945 at the conclusion of hostilities. He was paid off by Field Headquarters and given pass to return to Portici. 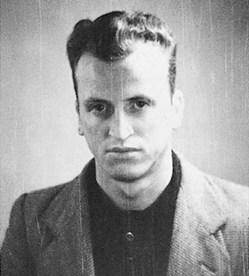 In November 1937 Franco entered the Italian Army. He left the Army in September 1943, and the next month he joined the partisans near Lucca, later going to Abetone.

Franco became leader of the partisan band of Lizzano (San Marcello). He was an excellent skier and champion of Abetone. He had local knowledge of the zone of Predazzo (Trento) and Abetone.

He had in his possession a Carta d’Identita for San Marcello.

He was employed by Captain Beattie, No. 5 Field Section, as agent-guide, on January 24, 1945. His name during employment was Giuseppe Santini. He was issued a false Carta d’Identita in that name.

There is no record of Franco’s termination of employment.

Information on this Italian is sparse. There is no photograph. He is identified as a priest who was employed as a No. 5 Field Section agent beginning in October 1943.

Otherwise, there is only this brief, amusing description:

Carlo was brought up at Forli. Intending to become a mechanic, he left school in July 1943. On September 21, 1943, in order to avoid being conscripted by the Germans, he left Forli and made his way south, crossing the line at San Severno. At Bari, he volunteered through Fronte Nazionale d’Azione for special service. He was taken to Naples, and entered the service of Major E.S.A. Herbert, No. 1 Field Section, as agent-guide in mid-October, 1943.

Carlo was very familiar with the area of Emilia and had slight knowledge of Lodi.