This is the second article about Joe Mandese that Joe’s grandson Bobby Cannon shared with me.

The article is followed by an interview that Bobby’s mother, Bernadette Cannon, conducted with Joe in 1993. 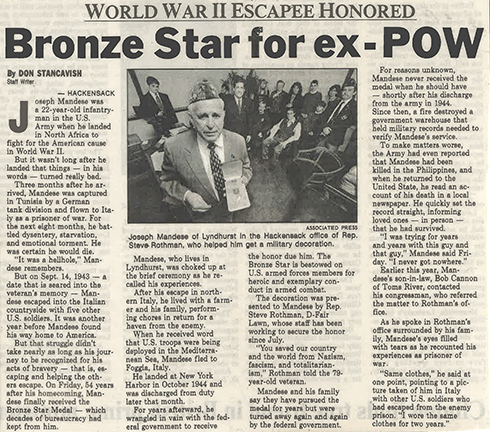 Caption: Joseph Mandese of Lyndhurst in the Hackensack office of Rep. Steve Rothman, who helped him get a military decoration.

HACKENSACK [New Jersey]—Joseph Mandese was a 22-year-old infantryman in the U.S. Army when he landed in North Africa to fight for the American cause in World War II.

But it wasn’t long after he landed that things—in his words—turned really bad.

Three months after he arrived, Mandese was captured in Tunisia by a German tank division and flown to Italy as a prisoner of war. For the next eight months, he battled dysentery, starvation, and emotional torment. He was certain he would die.

“It was a hellhole,” Mandese remembers.

But on Sept. 14, 1943—a date that is seared into the veteran’s memory—Mandese escaped into the Italian countryside with five other U.S. soldiers. [Joe actually escaped with four other men; he was the fifth escapee in the group.] It was another year before Mandese found his way home to America.

But that struggle didn’t take nearly as long as his journey to be recognized for his acts of bravery—that is, escaping and helping the others escape. On Friday, 54 years after his homecoming, Mandese finally received the Bronze Star medal—which decades of bureaucracy had kept from him.

Mandese, who lives in Lyndhurst, was choked up at the brief ceremony as he recalled his experiences.

After his escape in northern Italy, he lived with a farmer and his family, performing chores in return for a haven from the enemy.

When he received word that U.S. troops were being deployed in the Mediterranean Sea, Mandese fled to Foggia, Italy.

He landed at New York Harbor in October 1944 and was discharged from duty later that month.

For years afterward, he wrangled in vain with the federal government to receive the honor due him. The bronze star is bestowed on U.S. armed forces members for heroic and exemplary conduct in armed combat.

The decoration was presented to Mandese by Rep. Steve Rothman, D-Fair Lawn, whose staff has been working to secure the honor since July.

“You saved your country and the world from Nazism, fascism, and totalitarianism,” Rothman told the 79-year-old veteran.

Mandese and his family say they have pursued the medal for years but were turned away again and again by the federal government.

For reasons unknown, Mandese never received the medal when he should have—shortly after his discharge from the army in 1944. Since then, a fire destroyed a government warehouse that held military records needed to verify Mandese’s service.

To make matters worse, the Army had even reported that Mandese had been killed in the Philippines, and when he returned to the United States, he read an account of his death in a local newspaper. He quickly set the record straight, informing loved ones—in person—that he had survived.

“I was trying for years and years with this guy and that guy,” Mandese said Friday. “I never got nowhere.”

Earlier this year, Mandese’s son-in-law, Bob Cannon of Toms River, contacted his congressman, who referred the matter to Rothman’s office.

As he spoke in Rothman’s office surrounded by his family, Mandese’s eyes filled with tears as he recounted his experiences as prisoner of war.

“Same clothes,” he said at one point, pointing to a picture taken of him in Italy with other U.S. soldiers who had escaped from the enemy prison. “I wore the same clothes for two years.” 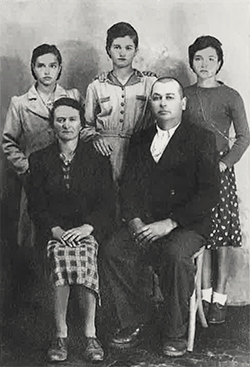 Joe stayed with the Cardinali family of Monte San Martino, Italy, for nearly nine months after his escape from Camp 59.

Joe Mandese, interviewed on November 10, 1993 by his daughter Bernadette Cannon

Where did you go for basic training?
Camp Kroft, South Carolina

When did you go overseas?
North Africa

What was the first country you went to?
Ireland and England

Who was your commanding officer?
Captain Allen

What general was in charge?
Mark Clark, 5th Army

What was your rank?
Private

What battles were you in?
Oran and Tunisia

Where were you when you experienced your first conflict?
Oran, North Africa

Who took you as prisoner?
Germans

Were you taken with other soldiers?
Yes, nine men

What battle were you fighting when you were taken?
Battle of Tunis

Where were you when you were captured?
Tunisia

Where did they take you after they captured you?
Italy

Were you interrogated?
Yes, by Germans and Italians

Were you mistreated when they asked you questions?
No

Where did they take you for interrogation?
Rome, Italy

What kind of prison camp was it?
Very bad. No heat or hot water. Lice and bed bugs were eating us up. Very little food. Also got Red Cross parcels.

Who else was at the prison camp?
Besides Americans, there were soldiers from other countries. Many from Cypress.

Were you allowed to speak or interact with other soldiers?
Yes

What did you eat?
Very little from Italians. Lived with Red Cross parcels.

What did you see from your prison?
Nothing. Walls were 15 to 20 feet high.

Were you allowed to write home?
Some

Did you receive any mail or packages?
Mail, no packages

What did you sleep on?
Wooden rack with straw mattress

What language did your captors peak to you in?
Italian

Were you sick?
Sick with dysentery. Was sent to Hospital Military de Caserta Napoli, Italy. When my weight went up to 115 pounds, I served as interpreter.

Did they supply medical treatment if needed?
Some

Did you receive news of what was going on in the war?
False information

Did you ever give up hope of getting out?
Yes

How long were you a prisoner of war?
665 days

Was your escape planned?
Yes

How many soldiers were with you when you escaped?
Seven soldiers

What were their names?
Phil-Pete-Tony-Edmund

How did you get out of the camp?
We got out because the Kings Army turned to the Allied side. All thought we were in much danger from other forces.

Was anyone hurt in the escape?
Do not know

Where did you go immediately after getting out?
Walked for two days and nights. Stopped at Villa Masche with Cardinale.

Did you bring anything with you?
Had nothing. Took poker from bath house for protection.

What shelter did you have after escaping?
None

What did you eat?
Begged and stole. Ate everything we could get. My Italian language came in handy. I spoke the best Italian.

When did you meet the family that would help take care of you?
About September 17, 1943

What was the family name?
Cardinali

Name the members of the family?
Enrico-Rosa-Primo-Gema-Pia-Rita

What town were you in?
Monte San Martino, Provincia Macerata, Marche, Italia

Where did you stay?
Fields

What did they do for you?
I stayed with Cardinale. He was a share cropper. Very poor. They gave what food they could spare. I also worked for them. The other fellows all were better off then me.

Why did you leave them?
I talked with the four I was with and we all believed the road was clear. This was after the Normandy Invasion, which was on June 6, 1944.

How long before you met with American troops?
About July 1944

What date was it that you met American troops?
It was in July 1944. 12th Air Force. Foggia, Italy. Americans notified Washington. Returned to duty.

Where did the Americans take you?
Algeria, North Africa

Were you still with the same men?
Yes, we stuck together

What date was it when you landed on American soil?
Cape Cod, Massachusetts—August 2, 1944 (temperature over 100 degrees F)

Where in America were you sent first?
Camp Butler, North Carolina—reassignment center

What date was it when you were home?
October 31, 1944. Took the month of November off and started working for the government on December 1, 1944. 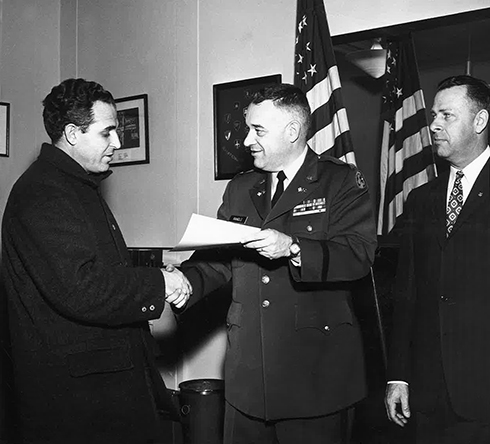 A caption on the back of this photo reads, “Joe Mandese, Motion Picture Developing Machine Operator / February 24, 1961 in Long Island City, New York / receives an award from Lt. Col Robert B. Randle. Looking on is Arthur J. Beers.” The civilian award was given to Joe when he was worked for the government.