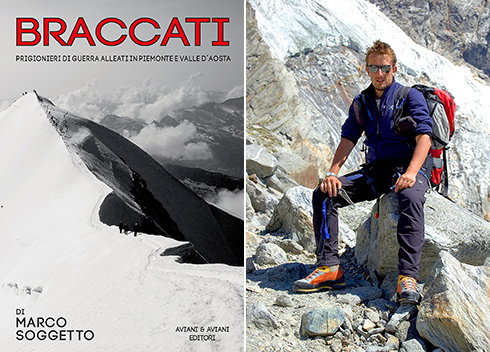 Cover of Marco Soggetto’s new book on prisoner escapes through the Western Alps; at right, the author

In April 2012, while researching escapes of Allied prisoners of war who travelled from Italy to Switzerland through the grand Western Alps, Marco Soggetto shared a message with visitors to this site in “A Daring Escape through the Alps.”

At least one of the prisoners who escaped over the mountains had been interned in Camp 59 at Servigliano—British rifleman Charles John P. Bradford.

Marco’s book is now in print. I asked him to write a summary of the work that I could post on this site:

They were frantic, alone, starving, and abandoned in a foreign land overturned by a terrible civil war and occupied by a cruel enemy. Words can scarcely describe the incredible odyssey of the 80,000 prisoners of war who escaped from Italian camps after the Armistice.

Among these men, a few young soldiers turned from tides of the combat to a fate deep in the great Western Alps. They were from the United Kingdom and Australia, Tasmania and New Zealand; they had survived sieges and terrible battles at Tobruk, Deir El Shein, and El Alamein—and in Greece. Some survived when the HMS Hereward was sunk during the evaculation of troops from Crete.

Now they all shared a single aim: to reach friendly, neutral Switzerland.

Unfortunately, the long-awaited freedom was not so easily accessible. The men faced harsh terrain and winter’s cold, snow and hunger, while always at risk of being spotted by one of the many German soldiers and RSI (Repubblica Sociale Italiana) militiamen who were about during the fearsome rastrellamenti.

Above all, they faced a monumental challenge in order to reach the Swiss border—a test for which they had not been trained, an experience they could never have had in their own countries.

They climbed for long hours and days into the mountains. Then at last, three roped parties stumbled slowly, hesitatingly, onto the glacier. They faced constant risk of avalanche while marching over large crevasses without appropriate gear or protection; no crampons and thermal suits, no special eye protection, no ice axes or rucksacks, no climbing harnesses and—in most cases—no boots. At more than 4,000 meters above sea level, deceiving whirls of wind and snow dance on the ridges.

Braccati. Prigionieri alleati in Piemonte e Valle d’Aosta (Hunted. Allied Prisoners in Piedmont and the Aosta Valley) is based on an accurate, three-year-long historical search, widened by contact with families of POWs and access to previously unreleased or forgotten documents. The book provides a glimpse into many untold stories, and also gives precious insight into the ways these foreign soldiers perceived Italy and its alpine lands and the brave villagers and mountaineers who assisted in their rescue.

It’s quite strange to consider that here in Italy there are thousands of titles concerning Fascism and its ill-omened wars, but we have almost forgotten one of the very few positive aspects of that sad era: the strong support given to Allied prisoners by Italians—farmers and priests, villagers and doctors, alpine guides and partisans. This book reveals the confluence of two very different cultures, and the stories of men and women who survived those terrible days.

The book is in Italian, but I would be pleased to find a foreign editor who might work with me on an English version of the book.

Written in Milan on January 17, 2014, with a special thank to Dennis and his excellent “Camp 59 Survivors” website.

For more information on Braccati. Prigionieri alleati in Piemonte e Valle d’Aosta, or to place an order:

Below is a list of soldiers Marco found to have crossed the mountains. If anyone has a family connection or otherwise has information about any of these men, please send a note to me at hilld@iu.edu and I will put you into contact with Marco.