This illustration of next-of-kin parcel repackers working out of the repacking center at Finsbury Circus in London appeared in a cheerful article published in the September 1942 edition of The Prisoner of War journal. The Prisoner of War was the official journal of the Prisoners of War Department of the Red Cross and St. John War Organisation (St. James Palace, London). The journal was provided free to next-of-kin.

Al Rosenblum, son of former Camp 59 prisoner Staff Sergeant Albert Rosenblum, sent me the materials for this post some time ago. But perhaps there is no better time to share this information than during this “season of giving.”

I Repack Your Parcel

The Prisoner of War
September 1942

THE DAY’S WORK
Described by an examiner at the Next-of-kin Packing Centre at Finsbury Circus.

I work in the packing department of the Next-of-Kin Packing Centre at Finsbury circus, where parcels from next-of-kin are checked and repacked before being sent on their long journey to the prisoners of war. There are 120 of us in the large packing room where I work.

My job is to examine the parcels as they arrive, and I like to think that it is the most important job of all.

As soon as a parcel comes into my hands I unpack and spread the contents carefully on a long trestle table. I check the coupon account and the contents of the parcel with the duplicate list made out by the next-of-kin. Anything that should not have been included is put on one side to be returned. I mark it “Contraband” on the list so that the prisoner understands it has not been lost in transit.

If the list doesn’t tally with the contents—and this too often happens—a note of the article in question and the name and address of both prisoner and next-of-kin are entered in what we call “The Discrepancy Book,” in case of query later on. Then I examine each article carefully to make sure that it conforms to regulations.

The censorship is done in our department. We have three official censors permanently on the spot, making sure that nothing is wrong.

If you could see some of the things that people send! They don’t seem to consider the regulations at all. Perhaps there is a message hidden in the finger of a glove or in the toe of a sock. But nothing, I hope, escapes my eyes! We are far too anxious that the parcel shall arrive at the other end to allow anything like that to slip through.

The enemy censors examine the parcel, too, and a concealed message might mean the confiscation of the parcel. I wish people would remember that no written message must be sent or anything like a pattern on a garment that might possibly be a code.

We had a good laugh the other day when I opened a parcel, sent by the wife of a prisoner in a large German camp, and found “V for victory” in red ink on the seat of his pants! Of course, we had to return them to her.

We dispatch about 800 a day and as many as 1,000 on some days. Some next-of-kin are very careful to observe the rules and their parcels are quickly dealt with. If we open a parcel and find that the clothing coupons are wrongly accounted for, no more will be issued until a satisfactory explanation is given, and the poor prisoner may get no next-of-kin parcel next quarter.

I wish people would remember, too, to pack the chocolate and soap well apart in the parcel, and not wrapped up together—for a soapy taste does not improve the taste of chocolate. A mistake made most frequently by next-of-kin is to include food—lovely home-made cakes, sweets and pots of jam—all of which we have to return.

Please remember that no food, with the exception of solid slab chocolate, is allowed in these parcels.

I must issue a word of warning about boot-blacking. Wartime makes, and especially the cheap kinds, are not good travellers, and it’s no uncommon thing to unpack a parcel and find the contents covered with large black marks. It is best to put sticking plaster round the join in the tin. Razor blades are another source of trouble; they often arrive unwrapped, and the poor examiner gets cut.

Some parcels arrive in a very woebegone state, partly due to careless packing, and partly due to the poor quality of the brown paper and string. Small things should be wrapped in a handkerchief or a treasure bag, if one is being included. Lay out the two largest garments, such as pyjama legs and a towel crosswise; put the articles in the middle, and wrap the larger garments around them.

After everything has been examined chocolate and soap, for which postal orders have been sent, are added; and the parcel is ready to be checked again and a record kept.

Banned articles, which have to be sent back, are dealt with by a special “Return to Sender” section.

Finally, the parcel is weighed and, if the weight allows, the Red Cross gift chocolate is added. After the contents have been again checked with the list, they are packed in a square parcel, wrapped in corrugated cardboard and extra-strong waterproof brown paper and string.

The form shown above was used by “next-of-kin” to send parcels to prisoners-of-war. The document is courtesy of Al Rosenblum.

This label may be transferred.
Sender—Expenditeur—Adsender

A second form, printed below the personal label and perforated for detachment, was intended to be used as an order form for tobacco to be sent to the prisoner. Instructions to next-of-kin specify, “Mail this sheet with your remittance to the tobacco company you select.” Instructions for the tobacco company read, “Inclosed is money order in the amount of _____ for which please send item No. _____ to the prisoner indicated on the attached label.”

The University of Wisconsin Digital Collections offers an excellent description of the B. E. W. License “G–PW-2” used for mailing parcels to prisoners of war and civilian internees.

The description details who may send parcels, what they can and cannot contain (medical supplies—except vitamin tablets—are not allowed, nor are written or printed material of any type). 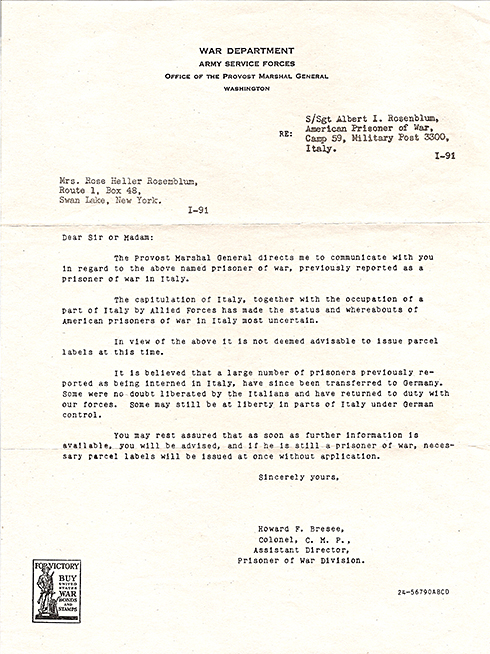 A letter from the Provost Marshal General’s office informed Rose Rosenblum that due to the uncertain status and whereabouts of her husband following Italy’s capitulation, parcel labels were being discontinued until further notice.

The Provost Marshal General directs me to communicate with you in regard to the above named prisoner of war, previously reported as a prisoner of war in Italy.

The capitulation of Italy, together with the occupation of a part of Italy by Allied Forces has made the status and whereabouts of American prisoners of war in Italy most uncertain.

In view of the above it is not deemed advisable to issue parcel labels at this time.

It is believed that a large number of prisoners previously reported as being interned in Italy, have since been transferred to Germany. Some were no doubt liberated by the Italians and have returned to duty with our forces. Some may still be at liberty in parts of Italy under German control.

You may rest assured that as soon as further information is available, you will be advised, and if he is still a prisoner of war, necessary parcel labels will be issued at once without application.