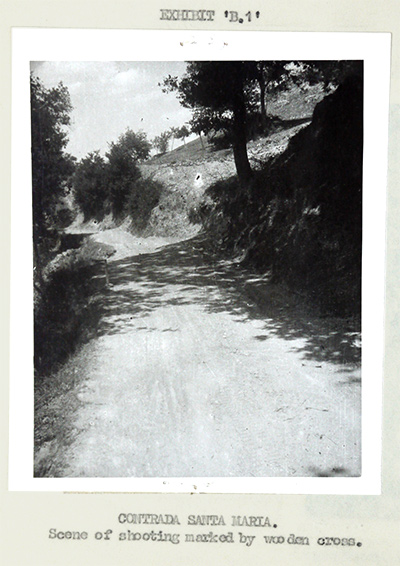 This photograph from the file of inquiry into the death of Signalman Sidney Smith by the Special Investigation Branch (SIB) of the Royal Military Police shows the spot on a road outside the comune of Montelparo, Italy, where the soldier was killed. 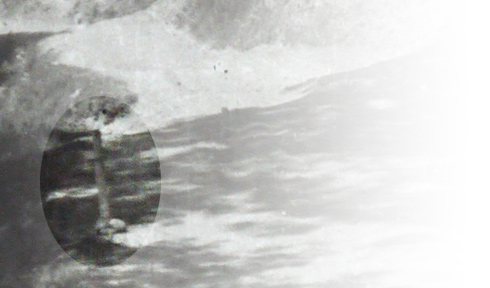 This detail (from the above photograph) shows the wooden cross erected by local Italians in remembrance of Sidney Smith, the man they affectionately knew as “Giorgio.”

The killing of an escaped prisoner of war outside the village of Montelparo is a subject that has come up twice on this site recently. In “Tenna Valley Memorial Walks,” Anne Copley recounted how, two months ago, Freedom Trail walkers visited the spot outside Montelparo where a young British soldier, known to locals only as George—or “Giorgio” in Italian—had been shot by German soldiers.

And in “War Crimes—Sorting through the Accounts,” I questioned whether George Godfrey was the same soldier killed at Montelparo.

But now, thanks to help from British researcher Brian Sims, we have a clear answer to the identify of the soldier and a detailed account of the tragic end to the life of Sidney Smith.

Below is the official summary of an investigation by the Special Investigation Branch (SIB) of the Royal Military Police into the death of Scottish soldier Sidney Seymour Smith, Signalman, Royal Corps of Signals.

Subject:-Alleged WAR CRIME against an escaped British Prisoner of War at MONTELPARO on 21st March, 1944.

DEATH OF: No. 2372205 Sgn. SMITH, Sydney S., Royal Corps of Signals. [spelling of the name as Sydney, rather than Sidney, would appear to be an error on this document]

Herewith precis of the results of the investigation made by this Section, with regard to the above mentioned subject.

Briefly the facts of the case are that about the beginning of November 1943, an escaped prisoner of war, since identified as the above, sought shelter at the farm of one MAZZONI Giuseppe. He became known to the family as “Giorgio”, and remained living with them until 21st March 1944.

About 1600 hours on that day two men dressed in civilian clothes appeared at the farm. One of them represented himself to be an escaped British Officer, who was engaged in assisting other escaped Allied Prisoners of War to regain their own lines. He apparently spoke English, and SMITH was obviously satisfied that both men were bona fide, for after all three had partaken of food and wine, they left the farm together.

On approaching the neighboring farm of VIOZZI Augusta, one of the two men left. SMITH and the remaining man went to the farm of VIOZZI, where the former asked for a drink of water. He was given a jug of water, and after drinking a little, he struck his companion on the head with the jug. A struggle ensued, but SMITH was overpowered, and led away in the direction of the nearby village of MONTELPARO. It would seem from this that between the time of leaving MAZZONI and arriving at VIOZZI’s, something had transpired which had altered SMITH’s assurance as to the authenticity of the claims of the two men to be British Officers, and that he realized that they were enemies.

Shortly after leaving the farm of VIOZZI, SMITH and his captor were rejoined by the other man, who had, meanwhile, arrested an Italian civilian LUPI Argeo. All four men then continued walking in the direction of MONTELPARO.

About half a mile from that village, they encountered a party of six or eight men, who were dressed, with the exception of two, in German uniform. One was a German, and the other was an Italian civilian, DORINZI Giuseppe, who, on being interviewed, stated that he was ordered by the Germans to guide them to the farm of MAZZONI.

The man whom SMITH had struck on the head with the jug, had sustained some injuries about the face, and on encountering the second party, appears to have pointed SMITH out as being responsible for those injuries, whereupon the uniformed Germans began to ill-treat SMITH and LUPI. The exact manner in which the assault was delivered is not clear, but it would seem that SMITH fell to the ground. One of the Germans, alleged to be an N.C.O., then fired a burst from an automatic weapon into SMITH’s head, whilst another fired a single shot from a revolver into his body. The N.C.O. then searched SMITH’s body and took possession of the contents of his pocket. The body was left by the roadside, and the Germans left in the direction of MONTELPARO. On the following day the body was removed by local inhabitants and interred in the cemetery of the above mentioned village.

From the descriptions obtained of the uniforms of the German troops involved in this incident and the modus operandi, there are reasonable grounds for assuming that the culprits were members of the S.S. BRANDENBURG Division, who are known to have been operating in the area at the time under inquiry.

It has not been possible, however, to obtain any evidence of identification of any of this party, and only meagre descriptions are available.

The road which these men followed is a cart-track connecting various farms and joins the main MONTELPARO road about half a mile from that village. This road leads round the side of a hill, having a high bank on the east side and on the west side the ground falls steeply away to the lower ground. At a point about 500 yards north of the church of Santa Maria, (MR.X.635798.) they encountered a second party of six or eight men. This party were all dressed in uniform with the exception of two, one of whom was a German and the other an Italian civilian DORINZI. Giuseppe, of MONTELPARO, who states that he had been ordered by the Germans to direct them to the farm of MAZZONI. On meeting, the two parties began to converse in German.

It would appear that the German who had engaged in the struggle with SMITH had sustained injuries about the face, and on encountering the second party, pointed out SMITH as being responsible for his injuries. The men in uniform then began to ill-treat SMITH and LUPI. There is some confliction of evidence as to the manner in which this assault was committed, and also regarding the actual shooting which ensued. LUPI, however, states that as a result of the assault, SMITH fell to the ground and while lying there, one of the Germans, alleged to have been an N.C.O., fired a burst from an automatic weapon into the head of SMITH, and that another of the Germans fired single shot from a revolver into SMITH’s body. This N.C.O. then searched the clothing of SMITH, taking possession of the contents of the pockets. The body of SMITH was left lying by the road-side and the Germans then went away in the direction of MONTELPARO. At the MONTELPARO – MONTERINALDO road (M.R. X. 6381.) they boarded a waiting lorry and drove through MONTELPARO in the direction of S. ELPIDIO – MORICO (M.R. X. 6484).

On the following day, 22nd March, 1944, the body of SMITH was taken to the cemetery of MONTELPARO where it was examined by Dr. CORINALDESI. Ginevra, who certified death to have been caused by gunshot wounds to the head. The body was then interred in the cemetery.

During an interview with MAZZONI. Giuseppe, on the 25th July, 1945, he handed me a pair of spectacles, one of the lens of which was broken. These spectacles had been found at the scene of the crime by TIRABASSI. Alfonso, on the day following the shooting. He identified them as being the property of SMITH, and later handed them to MAZZONI. I took possession of the spectacles and these form Exhibit “A-1”.

On the 10th August, 1945, in company with Sergeant MOTTRAM of this Section and Dr. CORINALDESI. Ginevra, I went to the cemetery at MONTELPARO where I saw a grave on which were two crosses. One, a white wooden cross, bore the particulars “No. 2372205 Sgmn S. SMITH, R. Sigs., 21-3-44” on the front, and on the back “erected by 19 G.R.U. [Graves Registration Unit]” The other, a black iron cross bore an Italian inscription to the effect that the grave was that of a prisoner named ‘Giorgio’, who had been killed by the Germans.

The grave was opened and CORINALDESI identified the body as that which he had previously examined on the 22nd March, 1944. The flesh on the body had entirely decomposed, but the bone structure remained intact. The body was about six feet in length and dressed in a blue serge jacket, blue woollen rolled top sweater, trousers of indeterminate hue and material, grey army socks and W.D. [War Department] boots. The bones under the left eye were fractured, and in the left breast pocket of the jacket and sweater there were corresponding holes, consistent with having been made by the passage of a bullet. 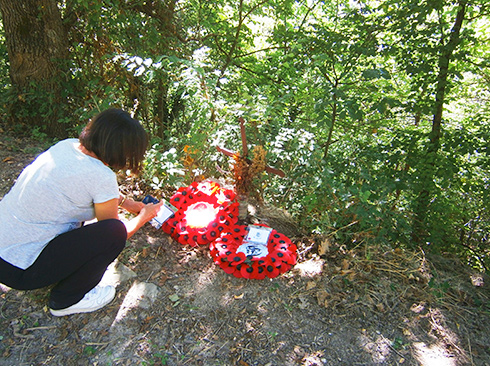 During a Freedom Trail walk in September of this year, participants paused to lay a memorial wreath at the spot where Sidney Smith was killed. The original wooden cross long ago was replaced by a small iron cross—perhaps the iron cross that originally marked Sidney’s grave in Montelparo Cemetery.

In her account of the walk, Anne Copley explained, “Our guide was very keen to point out that actually there were always fresh flowers there and due to the heat they had dried out too quickly. He was at great pains to point out that the young lad killed here had never been forgotten.” 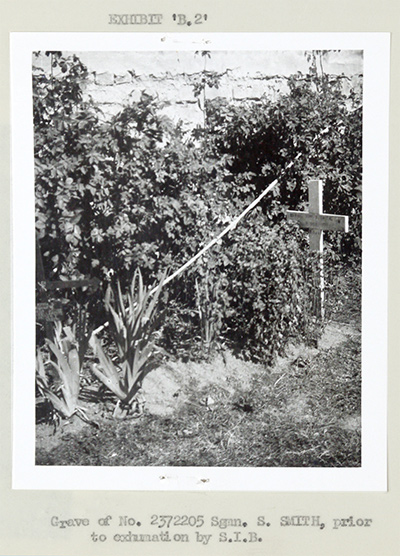 In time, Sidney’s remains were reinterred at Coriano Ridge War Cemetery. Drawing from the SIB report on Sidney’s death (two files totaling over 300 pages), Brian Sim explains, “The original Burial took place in the local Cemetery, not at the roadside. After the grave had been opened to confirm that it did contain the body of Signalman Smith, it was again closed and the body left there. This was presumably done because at that time the preparations of the C.W.G.C. [Commonwealth War Graves Commission] Cemetery were not complete.

“Perhaps the Locals took the G.R.U. Cross after Smith had been re-interred and placed it where it is now.”

A biography page on the University of Glasgow website indicates Sidney Smith was a graduate of that institution. The date of Sidney’s death on both the War Graves Photographic Project and University of Glasgow site is incorrect. According to the official investigative report, Sidney was killed on March 21 (not March 1), 1944. 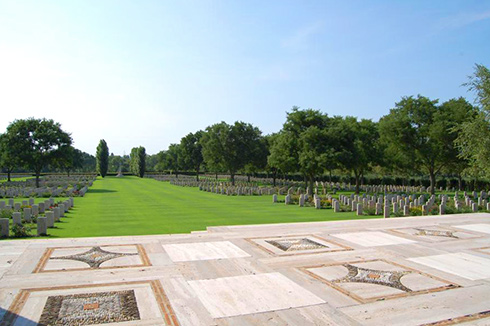 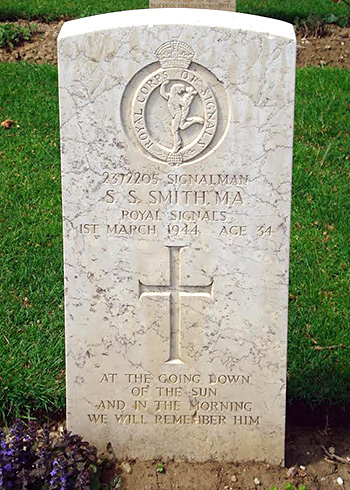 3. The following report has been received from the field unit : –

“Known as GIORGIO. Killed by enemy agents after being taken from the house of Giuseppe Mazzoni, Contrada S Maria, Montelparo. This house is three miles from the road and Smith stayed there for a considerable period. I called there and was given the attached papers. His personal effects were sent to the German authorities. Identification – cross and papers.”

4. The papers referred to in paragraph 3 are attached.

5. Please forward verified particulars in respect of Sgnm Smith in order that our records can be amended.