I heard this week from Dennis Donehoo. He wrote, “My great uncle was Private Christopher Facchina.

“Christopher’s POW record states that he participated in Operation Torch, was captured at the Battle of Kasserine Pass in Tunisia, and was imprisoned at CC 59, Ascoli Piceno, Italy.”

Christopher Facchina was one of 35 men my father, Sgt. Armie Hill, was given charge of in the camp. See “Men of Hut 4—Section 11.”

“Your father mentions during his time as a POW he attended an ‘Italian class,” Dennis said. “Many pages of his journal read like an English-Italian Dictionary. [See “Armie Hill’s Camp Journal.”]

“I am pretty sure my great uncle was the Italian instructor in Hut 4, as he was fluent in Italian.

“Both his mother and father were Italian immigrants who came to America in the early 1900s. I would surmise that he taught Italian to his fellow POWs in order to prepare them to communicate with the locals when they escaped.

“I am attaching a picture of my two great uncles who served in World War II. Christopher and Columbus Facchina were twins born on October 12, 1912. My great-grandparents Carlo Angelo Charles Facchina and Christina Agnulotts Facchina immigrated to the United States from Northern Italy around 1900, and all of their children were born in Washington DC, where Carlo Facchina owned his own construction and tile business.

“My mother said Christopher was bilingual in Italian and English, and that both languages were used in the Facchina household. After the escape, his Italian language skills would help him to successfully reach Allied lines.

“Like many World War II veterans, Uncle Chris did not talk much about his experiences. From his records we know he was a member of a 105 mm truck-drawn howitzer battalion (most likely from the 1st Armored Division).”

Christopher passed away in 1973. 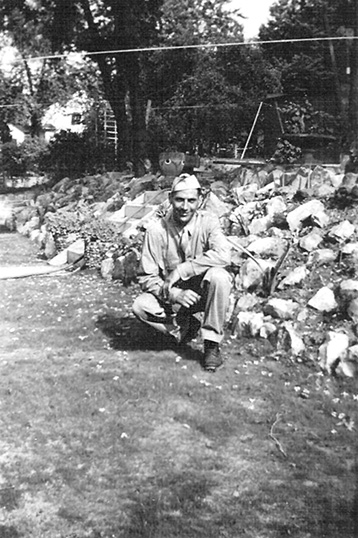 Chris Facchina in the backyard of his family’s home in Washington, DC.