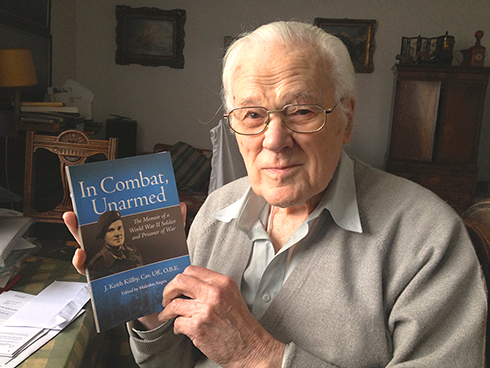 J. Keith Killby, in his London flat, holds a copy of his memoir on the day the books arrived from the printer

The initial plan for publication of In Combat, Unarmed: The Memoir of a World War II Soldier and Prisoner of War goes back several years, when Keith’s nephew, Malcolm Angus, approached him about recording his story.

Malcolm lives in New South Wales, Australia. In the epilogue of the memoir, he writes of the challenging process of writing the book when he and Keith were separated by great distance:

“It is June 2011, two weeks before Keith’s ninety-fifth birthday.

“I am writing this epilogue under my uncle’s close direction in his London flat, where we have been hard at work revising and editing his memoir. I started work on his story some years ago, attempting to do so by Royal Mail from my home in Australia. This proved rather difficult, and so I decided to complete the memoir by his side. Knowing that I was planning the visit, he telephoned me and said, ‘You better hurry up!'”

Last summer, shortly after I met Keith on a visit to London, I sent a note to Malcolm to ask about the memoir-in-progress. I am a graphic designer, I explained, and I would be pleased and honored to design a cover and lay out the interior of the book. He accepted my offer.

In his foreword to the book, Sir Nicholas described Keith’s complex, delightful character:

“Keith is something of an enigma. A conscientious objector, who joined the SAS; a man afraid of heights and prone to chronic seasickness, who became a parachutist and a sailor; a man with a taste for hard bargaining in the meat trade, who went out of his way to see the best in everyone in the brutal context of war…. With typical modesty, and wry self-deprecating humour, Keith reveals bravery in the face of crushing fear; compassion towards friend and foe alike; stubborn adherence to the values of fairness, open-heartedness and integrity; and a delight in puncturing egos and inflated authority, as he tells the story of a kind, peace-loving man, in combat unarmed, in fortitude unsurpassed.”

Keith with his mother, Dorothy Killby, circa 1917

In Combat, Unarmed begins with this paragraph:

“I was born on Wednesday, the 15th of June 1916, in Sydenham, a South London suburb, where the French Impressionist painter Camille Pissarro painted a wide, tree-lined avenue running towards St. Bartholomew’s Church. This painting now hangs in the National Gallery in London. When I visit there and view the picture, I can see the small gate that led into the orchard in which I played and from which I sometimes pinched an apple. Beyond this gate are two tall trees that had to be removed from the land when we built our own house there.”

Keith with sisters Evelyn and Muriel 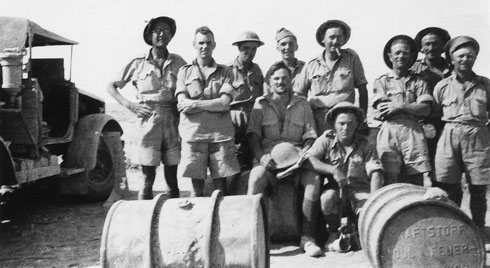 Photo taken with a German camera that Keith said, “fell off the back of a truck.” At the time, Keith’s 150th Field Ambulance unit had been captured in the western desert of Libya. Keith, seated at center, is holding his helmet.

Soon after Keith and his companions escaped from Camp 59, this Italian woman, Maria, crossed the river and climbed the bank with a pot, or pentola, on her head. Keith said, “We watched as she waded through the river in her bare feet and came slowly up the hillside toward us. She had brought our midday meal!”

The following description appears on the back cover of the book.

The Monte San Martino Trust was founded in 1989 by J. Keith Killby, a former prisoner of war in Italy, together with other veterans of the Second World War.

“The Trust awards English-language study bursaries to Italians, aged 18 to 25, in recognition of the courage and sacrifice of the Italian country people who rescued thousands of escaping Allied POWs after the Armistice in 1943. The Trust is a registered charity. It is supported by former POWs and the second and third generations of their families, many of whom keep in touch with the Italian families who gave refuge to the escapers.

“The bursaries are generally granted for four weeks’ study at language schools in Oxford and London. The students come from schools in Italian regions where prisoners were on the run. To date the Trust has provided educational bursaries to over 300 Italian students.

“In recognition of his years of service to Anglo-Italian relations, in 2001 Mr. Killby was awarded the O.B.E., and in 2002 he was honored with the Italian title of Cavaliere Ufficiale.”

The O.B.E. is an officer of the Most Excellent Order of the British Empire, an order of chivalry.

Cavaliere Ufficiale, or Knight of the Order of Merit of the Italian Republic is given to individuals in recognition of distinguished public service.

To Obtain a Copy of the Memoir

Sales of In Combat, Unarmed go to support the mission of Monte San Martino Trust.

If you are interested in purchasing a copy of the book, contact Letitia Blake by sending an e-mail to info@msmtrust.org.uk.

Domenico Silvestri, among the first students to receive a bursary from the Trust, meets with the President of Italy during the opening ceremony of the Monte San Martino Freedom Trail walk in 2001. Keith is seated at far left.