According to Stanley Taylor’s daughter, Barbara Chapman, after his escape from captivity, Stanley made his way to Switzerland. His records state he was there by November 2, 1944.

Barbara writes: “Father lefthand side, back row, assuming by snow to be St. Gallen, but I could be wrong.” 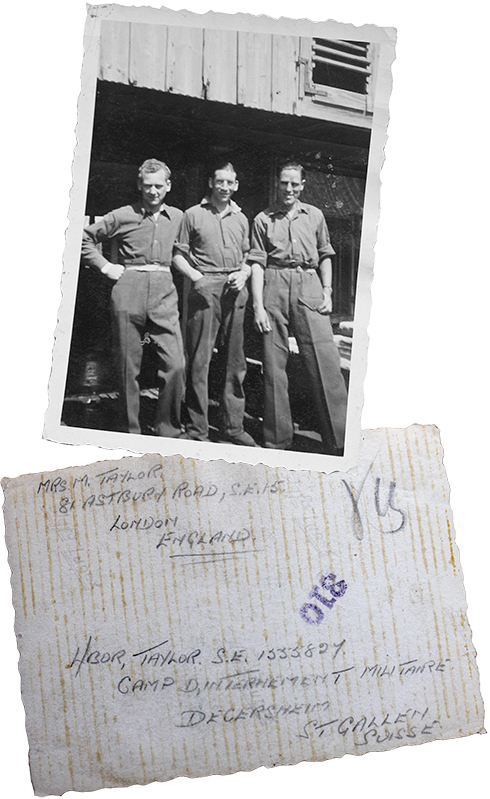 This photo of Stanley (standing at right) and two companions was evidently taken in Switzerland. On the back of the photo is Stanley’s home address (Mrs. M. Taylor, 81 Astbury Road, S.E. 15, London, England) and the address of his camp in Switzerland: 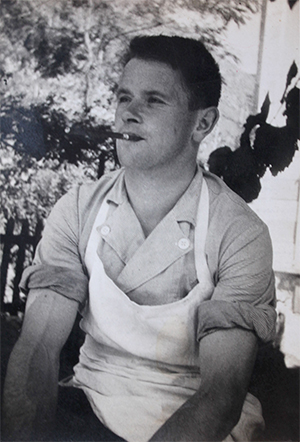 Of this photo of a young man, Barbara says, “I understand this to be a Swiss national.” The back side of the photo bears a stamp: Photo Hege, E5594, St. Gallen, Vadienstr. [Vadienstrasse] and a handwritten message in German or Swiss German. 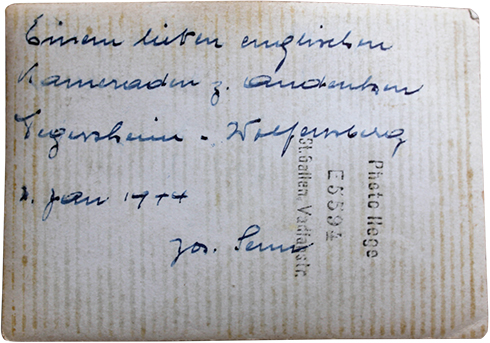 The certificate below was printed in Bern, Switzerland as a means of honoring the Swiss, who cared for the escaped prisoners who managed to cross the border from Italy into Switzerland.

Barbara wrote, “Here is the certificate I mentioned. I have Googled the two officers whose signatures are on it. They were both in Campo PG12 Vincigliata known as Castello di Vincigliata. As you probably know, this camp was for officers, so why my father should have a copy of this I do not know. In fact, my Godmother also had one.”

Here is the text of the certificate:

Adorned with the royal coat of arms a border of oak leaves, the certificate bears a color reproduction of a lithograph by seventeenth-century Bern artists Sigmund Freudenberger entitled The Return of the Soldier.

During this the Second World War of our generation over five thousand British officers and men, escaped prisoners of war sought sanctuary in Switzerland whilst awaiting the opportunity to rejoin their forces. Many of these men had suffered severe hardships and privations and were in need of all those things necessary to restore them to a full state of mental and physical fitness – above all they required a welcome, kindness and companionship. It is to all those individuals in Switzerland, who have done so much to show us hospitality and kindness, that this card is sent as a token of our gratitude and remembrance.

The British Empire, which, in the cause of Liberty, has fought on from a time of weakness and great peril to supreme strength and final victory, must owe a debt of gratitude to those who have helped our Sailors, Soldiers, and Airmen.

The Senior British Officer and all ranks convey to you their sincere gratitude and very best wishes for the years to come.