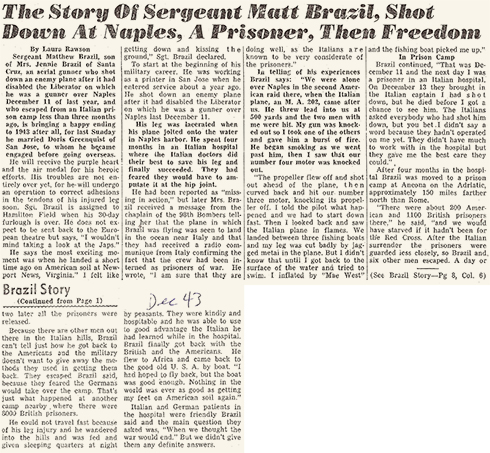 The Story of Sergeant Matt Brazil, Shot Down at Naples,
A Prisoner, Then Freedom

Sergeant Matthew Brazil, son of Mrs. Jennie Brazil of Santa Cruz, an aerial gunner who shot down [by] an enemy plane after it had disabled the Liberator on which he was a gunner over Naples December 11 of last year, and who escaped from an Italian prison camp less than three months ago, is bringing a happy ending to 1943 after all, for last Sunday he married Doris Greenquist of San Jose, to whom he became engaged before going overseas.

He will receive the purple heart and the air medal for his heroic efforts. His troubles are not entirely over yet, for he will undergo an operation to correct adhesions in the tendons of his injured leg soon. Sgt. Brazil is assigned to Hamilton Field when his 30-day furlough is over. He does not expect to be sent back to the European theatre but says, “I wouldn’t mind taking a look at the Japs.”

He says the most exciting moment was when he landed a short time ago on American soil in Newport News, Virginia. “I felt like getting down and kissing the ground,” Sgt. Brazil declared.

To start at the beginning of his military career. He was working as a printer in San Jose when he entered service about a year ago. He shot down an enemy plane after it had disabled the Liberator on which he was a gunner over Naples last December 11.

His leg was lacerated when his plane jolted onto the water in Naples harbor. He spent four months in an Italian hospital where the Italian doctors did their best to save his leg and finally succeeded. They had feared they would have to amputate it at the hip joint.

He had been reported as “missing in action,” but later Mrs. Brazil received a message from the chaplain of the 98th Bombers telling her that the plane in which Brazil was flying was seen to land in the ocean near Italy and that they had received a radio communique from Italy confirming the fact that the crew had been interned as prisoners of war. He wrote, “I am sure that they are doing well, as the Italians are known to be considerate of the prisoners.”

In telling of his experiences Brazil says: “We were alone over Naples in the second American raid there, when the Italian plane, an M.A. 202, came after us. He threw lead into us at 500 yards and the two men with me were hit. My gun was knocked out so I took one of the others and gave him a burst of fire. He began smoking as we went past him, then I saw that our number four motor was knocked out.

“The propeller flew off and shot out ahead of the plane, then curved back and hit our number three motor, knocking its propeller off. I told the pilot what happened and we had to start down fast. Then I looked back and saw the Italian plane in flames. We landed between three fishing boats and my leg was cut badly by jagged metal in the plane. But I didn’t know that until I got back to the surface of the water and tried to swim. I inflated my ‘Mae West’ and the fishing boat picked me up.”

Brazil continued, “ That was December 11 and the next day I was a prisoner in an Italian hospital. On December 13 they brought in the Italian captain I had shot down, but he died before I got the chance to see him. The Italians asked everybody who had shot him down, but you bet I didn’t say a word because they hadn’t operated on me yet. They didn’t have much to work with in the hospital but they gave me the best care they could.”

After four months in the hospital Brazil was moved to a prison camp at Ancona on the Adriatic, approximately 150 miles father north than Rome.

“There were about 200 American and 1100 British prisoners there,” he said, and they would have starved if it hadn’t been for the Red Cross. After the Italian surrender the prisoners were guarded less closely, so Brazil and six other men escaped. A day or two later all the prisoners were released.

Because there are other men out there in the Italian hills, Brazil can’t tell just how he got back to the Americans and the military doesn’t want to give away the methods they used in getting them back. They escaped Brazil said, because they feared the Germans would take over the camp. That’s just what happened at another camp nearby where there were 8000 British prisoners.

He could not travel fast because of his leg injury and he wandered into the hills and was fed and given sleeping quarters at night by peasants. They were kindly and hospitable and he was able to use to good advantage the Italian he had learned while in the hospital. Brazil finally got back with the British and the Americans. He flew to Africa and came back to the good old U.S.A. by boat. “I had hoped to fly back, but the boat was good enough. Nothing in the world was ever as good as getting my feet on American soil again.”

Italian and German patients in the hospital were friendly Brazil said and the main question they asked was, “When we thought the war would end.” But we didn’t give them any definite answers.