I received a note from Michael Laurence Barker of Calgary, Alberta, Canada, on December 24.

He wrote, “I am the nephew of a Canadian POW who was, I believe, held at Servigliano, at least for part of his time as a POW.

“He escaped from prison camp and travelled with seven others before being discovered in a barn by the Nazis, near Pito. The Nazis set the barn on fire. When the men ran out, all, but for one, were shot. The date was March 11, 1944. The one man who escaped told the sad story to the families of the other seven men. I do not know his name.

“Laurence was buried locally by Pito villagers. Presumably the others were buried there as well.

The Ancona War Cemetery lies in rural Tavernelle, in the commune and province of Ancona, Italy.

Michael sent me a newspaper article about his uncle’s death. I asked him if the spelling of his name in the article was incorrect, and whether he was named for his uncle.

He replied, “Laurence—yes, spelled with a ‘u’ not a ‘w’; the obituary had the misspelling. Yes, I am named for him.

“The only reason I believe he may have been at Camp 59—and perhaps moved to Camp 53, as I note from your site that many British (Canadians) we transferred there—is that I would think he could not have traveled too far from where he escaped to where he was killed (Pito) but I may be completely wrong in that assumption.

“I do not know the names of the others who were killed.

“He immigrated to Canada in June 20, 1920 with his mother, Amy, on the CP Ship Scotian (renamed Marglen in 1922). My grandfather, Sidney, a Canadian soldier who fought in World War I, married Amy in England. Sidney had already returned from England to Canada when Amy and Laurie made their way from England to join him in Oxbow, Saskatchewan. They arrived on June 29, 1920.

“Laurence enlisted in the Royal Canadian Air Force in May 1940. He started serving overseas in January 1941, and in the Middle East in July 1941. He served on Wellington bombers in the Desert Air Force.

“Laurence was shot down over Benghazi, Libya, and taken prisoner in November 1941.

“As a side note, Laurence’s father was a POW camp guard at camps in Alberta, Canada, for German prisoners at Ozada (camp 133) and at the Kananaskis camp (130) during the same period of time that Laurence was a prisoner in Italy.”

NO PAIN, NO GRIEF,
NO ANXIOUS FEAR
CAN REACH
THE PEACEFUL SLEEPER HERE

After corresponding with Michael, I checked the online list of the 967 Allied servicemen who are buried in the Ancona cemetery. I guessed that some, or all, of the six escapees who died with Laurence might have been re-interred in the cemetery. However, I found that Laurence was the only one listed with a March 11, 1944 date of death.

Died for His Country

Sgt. S. H. Barker, attached to the Veterans’ Guard of Canada at Medicine Hat and Mrs. Barker, 325 Avenue E, south, have been informed by the R.C.A.F. casualties officer that their son, W.O.2 Lawrence Sidney Barker, 24 years old, is presumed to have died late in March or early in April of this year while a prisoner of war in Italy. It is believed that he was buried just outside the cemetery at the village of Pito. Warrant Officer Barker was taken prisoner of war in November, 1941, and his parents received no word from him since the capitulation of Italy. He was a graduate of the Youth Training Program at the Technical Collegiate and enlisted in May, 1940. He went overseas in January, 1941, and to the Middle East in July, 1941. Besides his parents he is survived by a brother, F.O. [Flight Officer; Laurence’s brother Leslie was a flight lieutenant] L. W. A. Barker, with the R.C.A.F. overseas. 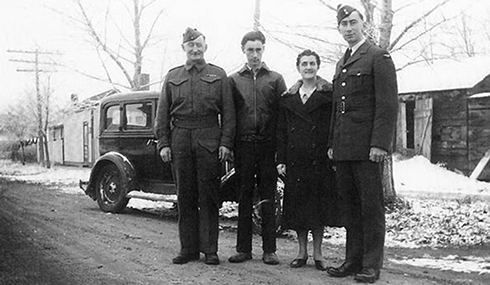 Barker family photo of Sid (father), Leslie, Amy (mother) and Laurence, just before Laurence went overseas in late 1940. Michael says, “Laurie would be 20 and Les would be 15 here.” 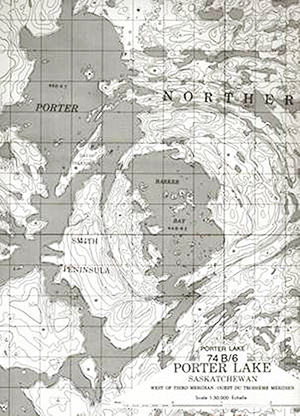