A page in Robert Dickinson’s journal,”Servigliano Calling,” is dedicated to “next-of-kin” parcels received.

Relatives of Allied prisoners were allowed to send one package four times a year to their loved ones. How this process was conducted in Canada was described in an Ottawa Citizen article about the services of the Canadian Red Cross Enquiry Bureau on April 26, 1944:

“There are 6,365 [Canadian] prisoners and internees on record whose next-of-kin are issued quarterly labels for personal parcels by the Department of National War Services….

“As soon as a man is officially declared a prisoner of war, another pamphlet is sent [by the Red Cross Enquiry Bureau] advising the next-of-kin what to do about parcels and enclosing the latest postal regulations.

“The bureau also receives reports from the supplementing committee of the Red Cross by which it is enabled to keep in touch with the next-of-kin who have difficulty in making up their quarterly parcels. One of the duties of the Red Cross is to see that the parcels are up to their full weight and it is through these reports that the liaison officers of the Red Cross branches are able to offer help to those in need of it.”

I asked Robert’s nephew, Steve Dickinson, what he thought the distinction was between chocolate, bought chocolate, and gift chocolate (as these types of chocolate are recorded separately in Robert’s parcel contents lists.) Steve guessed that gift chocolate might be chocolate given to the family by friends or fellows at Robert’s regiment in Lincoln to add to the parcel.

Comments between entries in italic are from Robert’s diary.

Jun 19th
A great day: at last received my next of kin!!!, just what I wanted. Bought 4½ lb of cooking onions, try to eat them like apples because of being so hungry. I fully realize now that I had never been hungry before becoming a Prisoner of War, when ever thinking it in civvy street, was just a farse. Mother told me so many a time.

Oct 6th
Second next of kin, chocolate! Big swindle over pillows; supposed to have been filled with special grass; being so little in them most of us put extra straw in; have had to take it out and pillow weighed. If an ounce under weight must pay for a new lot; mine under weight.

Dec 23rd
Big Day! 3rd next of kin! Won soap box in Christmas raffle and finished a perfect day with 2 letters, 1 from Ida, 1 from home. 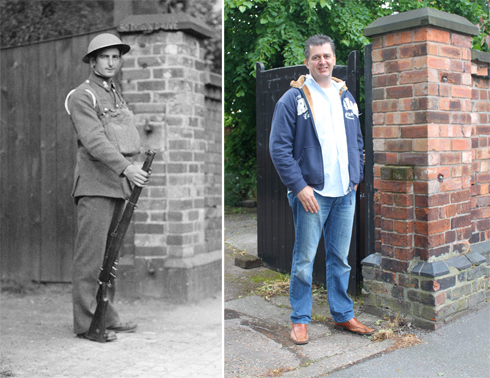 Above: Robert Dickinson standing guard at his regimental barracks on Burton Road in Lincoln. Robert’s nephew Steve at the same gate in June 2012.