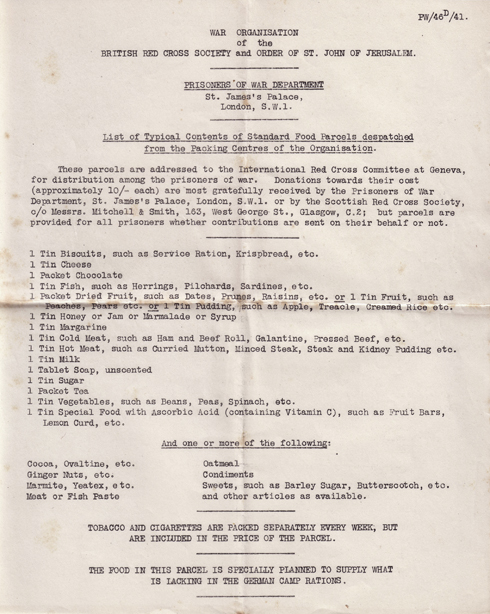 This memo from the British Red Cross and Order of St. John lists contents of a typical Red Cross prisoner of war food parcel. It also provides instructions for how to donate to the cause.

The memo, saved by Denis Crooks, was sent to me by Denis’ daughter Maggie Clarke.

WAR ORGANISATION
of the
BRITISH RED CROSS SOCIETY and ORDER OF ST. JOHN OF JERUSALEM.

List of Typical Contents of Standard Food Parcels despatched from the Packing Centres of the Organisation.

These parcels are addressed to the International Red Cross Committee at Geneva, for distribution among the prisoners of war. Donations towards their cost (approximately 10/- each) are most gratefully received by the Prisoners of War Department, St. James’s Palace, London, S.W.1. or by the Scottish Red Cross Society, c/o Messrs. Mitchell & Smith, 163, West George St., Glasgow, C.2; but parcels are provided for all prisoners whether contributions are sent on their behalf or not.

And one or more of the following:

TOBACCO AND CIGARETTES ARE PACKED SEPARATELY EVERY WEEK, BUT ARE INCLUDED IN THE PRICE OF THE PARCEL.

THE FOOD IN THIS PARCEL IS SPECIALLY PLA.NNED TO SUPPLY WHAT IS LACKING IN THE GERMAN CAMP RATIONS.