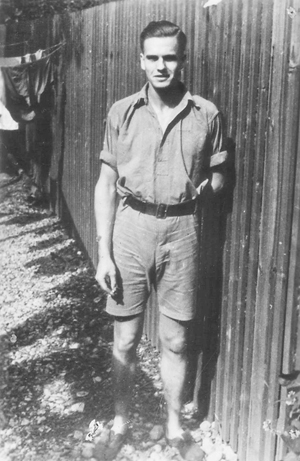 In February, I received a note from Maggie Clarke in England.

Her father, she explained, was Denis Crooks, one of the servicemen whose poetry was included in Robert Dickinson’s “Servigliano Calling” prison camp journal.

Maggie wrote, “I have just downloaded and read the ‘Servigliano Calling’ camp poems of Robert Dickinson and had to write to let you know that Denis Crooks, who wrote three of them, was my father. I was so excited to read these poems, as I never knew that he wrote poetry—he certainly never wrote any after the war—and even my mother was not aware he did this.

“We have all my Dad’s POW letters written home and Bob is mentioned in so many of them. They were so close and I know he was devastated when they were split up. I’m sure they kept each other going in those bad times.

“In Dad’s letters he mentioned the blowers they made, and the different things they cooked and all the other things they made. It was amazing what they did and fascinating to read, as Dad never talked about the war to us. The only time he opened up a bit was when my son—his grandson—was doing a WW2 project for school and chatted to him about it.

“In fact we didn’t find his suitcase full of these letters until after he died nine years ago. We also have some photos which he took of camp life, although, as he said, he would have been shot if he had been caught! He must have got to a point where he didn’t care.

“I see [in Robert’s diary] that Dad is mentioned quite often. It was really sad to read the entry on May 9th when they were split up. Bob seemed as upset as Dad.

“I was also interested to see the tin cover of his diary. Dad also had a ‘tin book’ which he brought back with him from the war. When he was working in London in the 50’s, he met up with someone he knew from his POW days who asked if he could borrow his tin book to show his family. This Dad did, but then never saw him again and couldn’t contact him as he only had a work number—which he had left.

“All I can remember is that he used to work for the Milk Marketing Board.

“I know Dad was really upset about this. Although I never saw the book, I assume it was a diary of some sort like Bob’s—as they were such good friends, they probably did similar things.”

In a later e-mail, Maggie continued, “We have lots of information from letters home, photos (which aren’t of brilliant quality as he somehow had them developed in camp! I seem to remember he mentioned bribing one of the guards!!) Mind you, by reading of some of the inventions he and Bob made, they probably made their own darkroom!

“Dad mentions an Ernest Dale, George Marsland, and Arthur Harris. I seem to remember meeting Arthur Harris when I was a little girl. I think he and his wife and daughter came to stay one weekend. [Arthur Harris’ address is recorded in Robert Dickinson’s journal.]

“They all seemed to look out for each other and asked their families to contact each other in case letters hadn’t got through.

“As well as the above letters, we also have letters from when Dad was on the troop ship, in Egypt and North Africa, and his first letter as a POW.

“His parents kept everything, including the telegram to say he was missing, newspaper cuttings, etc. We’ve also got his letter home dated 28 April 1945 saying he was free! [It was] sent via the American Red Cross.

“Some of Dad’s early and last letters were written in pencil, as his pen had run out and he couldn’t get another one!

“Dad’s parents were very meticulous and kept a list of dates of when they sent letters and when they received them—some took months to reach their destination, others just a few weeks.

“Dad was captured in North Africa in April 1941. His first letter home as a POW was postmarked Tripoli, which I believe was the main Italian city in North Africa.

“I’ve done some research and wonder if he was captured by the Germans in Tobruk, during Operation Sonnenblume, and then handed over to the Italians. I know Dad mentioned being in Tobruk. He was in the Royal Corps of Signals, so could have been anywhere, presumably.

“The first address that he was able to give was Feldpost 12545.

“His first letter home to say he had been moved to Camp 59 in Italy was written in January 1942. Dad moved to Camp 53 in February 1943 (and was still with Bob), and then in October 1943 he wrote a letter (in pencil) saying he had been moved again—to Germany. His address on letters home was Stalag IV-G which, according to a ‘Map of the Principal Camps’ his parents had, was in Oschatz, between Leipzig and Dresden, where I believe he stayed until the end of the war.”

Maggie mentioned three names and addresses she had come across among her father’s materials:

Alec Foreman is another of the “Servigliano Calling” poets. In Robert’s journal his last name is spelled without an “e” He is identified in the journal as both Alec Forman and A. Forman. This address is most likely Germiston in Transvaal, South Africa—note the difference in spelling from what Maggie sent.

Maggie wrote, “Alec and Dad were good friends I think, and he used to write to Dad’s parents as well.”