Before traveling to Italy, I thought I had a good sense of what Camp 59 was like—the layout of the camp, construction of the buildings, and the encompassing brick walls.

Of course, no former POW’s story of how things were in the camp—or even actual photographs I had been sent of Camp 59—could convey so complete a sense of the place as I experienced on walking though the camp for the first time in September.

From within the walls, I could look in all directions, touch the soil, feel the autumn Italian sun on my skin, hear birds and see them flying overhead.

The camp today is a community park called Il Parco della Pace (the Park of Peace), with green lawns, shrubs, trees, and playing fields and courts for soccer, basketball, and other sports. 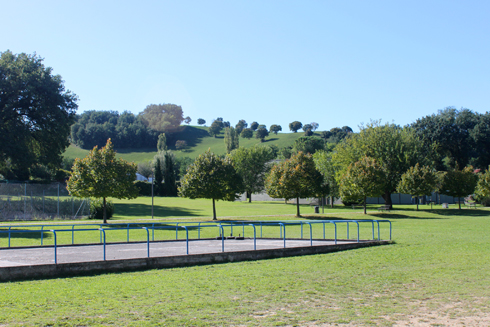 The barracks were razed long ago and only the ruins of the brick infirmary remain. The exterior camp walls are covered with vines so thick that in places they look more like tall hedges than masonry.

One thing in particular impressed me. Because tall hills surround the camp, prisoners could see men and women at work in the fields and vineyards beyond the walls.

My father, Armie Hill, who was interned in Camp 59, had grown up on a farm in northern Wisconsin.

Although dad attended school though eighth grade, he and his siblings helped with farm chores before and after school and all during the summer. He knew what it was to work the land—to turn the ground with a horse-drawn plow, to plant and cultivate and weed by hand, and to harvest crops and make hay.

The affinity Armie felt for the Italian farmers—the contadini—is apparent in this poetic passage he wrote about “the farmer’s religion” on the inside cover of his camp notebook: 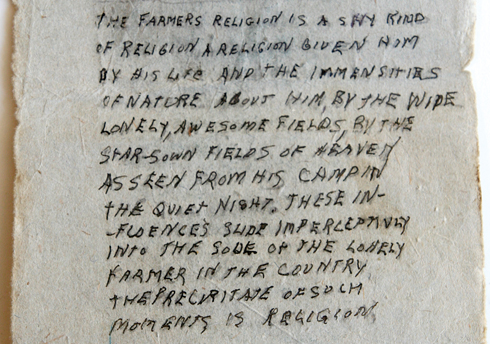 “The farmers religion is a shy kind of religion A religion given him by his life and the immensities of nature about him, by the wide lonely, awesome fields, by the star-sown fields of heaven as seen from his camp in the quiet night. These influences slide imperceptivly [imperceptibly] into the soul of the lonely farmer in the country The precipitate of such moments is religion.”

The word “camp” can be read in more than one way, of course. Armie had bivouacked beneath the stars while in the service.

Armie might have felt that, although he was a prisoner, he could draw strength from the open sky and stars overhead—the sky he shared with those outside the camp walls. 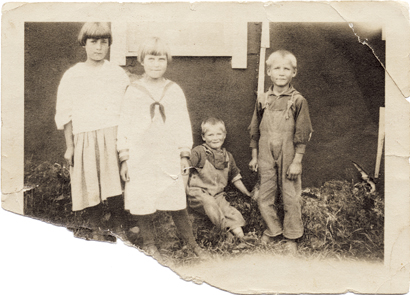 Photo: Armie Hill (at right) with three of his siblings at the Hill family farm in Wisconsin, 1920s.