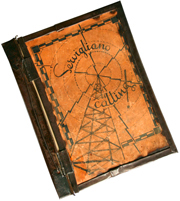 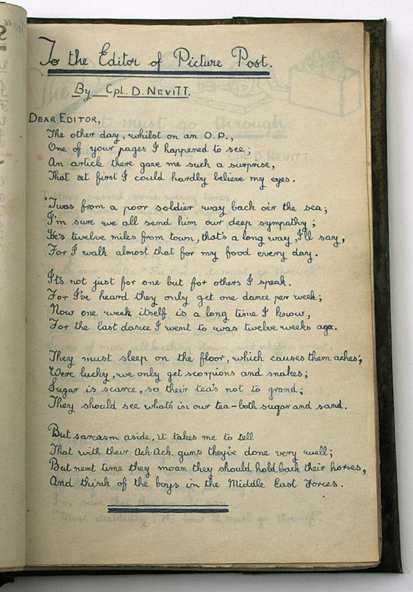 This poem by Cpl. D. Nevitt brings to a close the posts of prisoners’ poems recorded in Robert Dickinson’s “Servigliano Calling” prison camp diary. There are 34 poems in all in Robert’s journal.

In this poem, “To the Editor of Picture Post,” Corporal Nevitt expresses dismay at the complaints of soldiers at home over the deprivations they feel they are suffering.

Compare their situation to the lot of soldiers at war, Nevitt says, to realize where true hardship lies.

The other day, whilst on an O.P.,
One of your pages I happened to see;
An article there gave me such a surprise,
That at first I could hardly believe my eyes.

“Twas from a poor soldier way back o’er the sea;
I’m sure we all send him our deep sympathy;
He’s twelve miles from town, that’s a long way, I’ll say,
For I walk almost that for my food every day.

It’s not just for one but for others I speak,
For I’ve heard they only get one dance per week;
Now one week itself is a long time I know,
For the last dance I went to was twelve weeks ago.

They must sleep on the floor, which causes them aches;
We’re lucky, we only get scorpions and snakes;
Sugar is scarce, so their tea’s not too grand;
They should see what’s in our tea—both sugar and sand.

But sarcasm aside, it takes me to tell
That with their ack-ack guns they’ve done very well;
But next time they moan they should hold back their horses,
And think of the boys in the Middle East Forces.