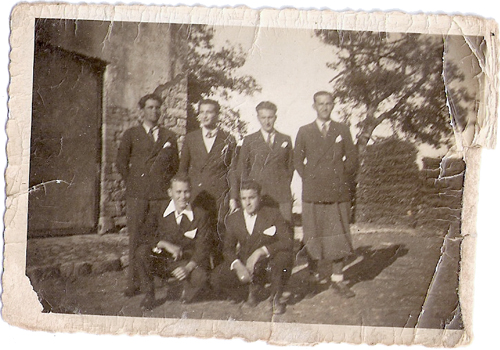 Al Maly provided this photograph of his father, Joe Maly, taken when Joe was in Italy and while he was being sheltered by the Papiri family of Montefalcone.

To the best of my knowledge the writing on the back of the photo reads:

The first line indicates the village name (Montefalcone Appennino), the date (June 25, 1944), and the province the village was a part of at the time (Ascoli Piceno). Montefalcone is today a part of the newly-formed Province of Fermo.

The next two lines translate as “My duty as a patriot,” plus something along the lines of “I’ll leave you all this record [or keepsake].”

And it is signed,
“Papiri Family, Nello Papiri”

According to Al, the first man standing on the left is a son in the Papiri family. Next to the son is Joe Maly, and beside Joe is James Guillary. The other three men in the photo were also escaped POWs. Joe and “Gilly” were both housed in Hut 4–Section 11 of Camp 59.

Al told me his dad “was one of the men who made it out through the hole in the wall and in his group one of the men was shot. They could not go back for him as they were under fire. He never talked much about the war, only little indirect statements when I was young and a little more detail as I got older and more close to him.”

After the escape, Joe fought with the Italian resistance. He eventually made it to the Polish lines.