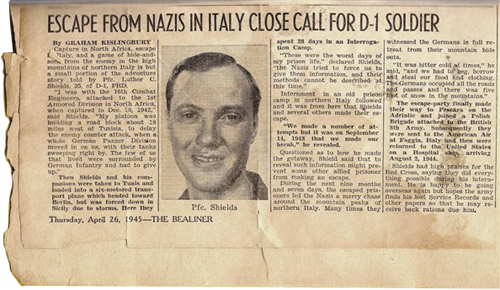 The following article by Graham Kislingbury, entitled “Escape from Nazis in Italy Close Call for D-1 Soldier,” appeared in the Thursday, April 26, 1945 edition of The Bealiner. The Bealiner is the newspaper of the Beal Air Force Base in Yuba County, California.

Capture in North Africa, escape from Italy, and a game of hide-and-seek from the enemy in the high mountains of northern Italy is but a small portion of the adventure story told by Pfc. Luther C. Shields, 25, of D-1, PRD.

I was with the 16th Combat Engineers, attached to the First Armored Division in North Africa, when captured in Dec. 10, 1942,” said Shields. “My platoon was building a road block about 18 miles west of Tunesia to delay the enemy counter attack, when a whole German Panzer Division moved in on us, with their tanks sweeping right by. The few of us that lived were surrounded by German Infantry and had to give up.”

Then Shields and his companions were taken to Tunis and loaded into a six-motored transport plane which headed toward Berlin, but was forced down in Sicily due to storms. Here they spent 38 days in an Interrogation Camp.

These were the worst days of my prison life,” declared Shields, “the Nazis tried to force us to give them information, and their methods cannot be described at this time.”

Internment in an old prison camp in northern Italy followed and it was from here that Shields and several others made their escape.

Questioned as to how he made the getaway, Shields said that to reveal such information might prevent some other allied prisoner from making an escape.

During the next nine months and seven days, the escaped prisoners led the Nazis a merry chase around the mountain peaks of northern Italy. Many times they witnessed the Germans in full retreat from their mountain hide outs.

“It was bitter cold at times, he said, “and we had to beg, borrow and steal our food and clothing. The Germans occupied all the roads and passes and there was five feet of snow in the mountains.”

The escape-party finally made their way to Pescara on the Adriatic and joined a Polish brigade attached to the British 8th Army. Subsequently they were sent to the American Air at Foggia, Italy and then were returned to the United States on a Hospital Ship, arriving August 2, 1944.

Shields had high praises for the Red Cross, saying they did everything possible during his internment. He is happy to be going overseas again but hopes the army finds his lost Service Records and other papers so that he may receive back rations due him.