The following news clipping is likely from the Elgin Courier News, published in Elgin, Illinois, near Roland Rakow’s boyhood home of West Dundee.

The article would have appeared in the paper in September 1942. 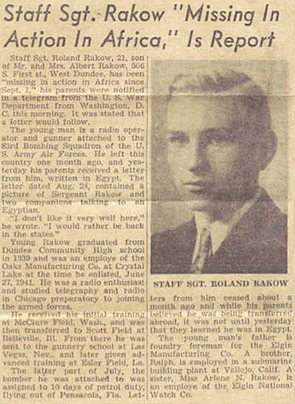 Staff Sgt. Rakow “Missing In Action In Africa”
Is Report

Staff Sgt. Roland Rakow, 21, son of Mr. and Mrs. Albert Rakow, 506 S. First st., West Dundee, has been “missing in action in Africa since Sept. 1.” his parents were notified in a telegram from the U.S. War Department from Washington, D.C. this morning. It was stated that a letter would follow.

The young man is a radio operator and gunner attached to the 83rd Bombing Squadron of the U.S. Army Air Forces. He left this country one month ago, and yesterday his parents received a letter from him, written in Egypt. The letter dated Aug. 24, contained a picture of Sergeant Rakow and two companions talking to an Egyptian.

I don’t like it very well here,” he wrote. “I would rather be back in the states.”

Young Rakow graduated from Dundee Community High school in 1939 and was an employee of the Oaks Manufacturing Co. at Crystal Lake at the time he enlisted, June 27, 1941. He was a radio enthusiast and studied telegraphy and radio in Chicago preparatory to joining the armed forces.

He received his initial training at McClure Field, Wash., and was then transferred to Scott Field at Belleville, Ill. From there he was sent to the gunnery school at Las Vegas, Nev., and later given advanced training at Esler Field, La.

The latter part of July, the bomber he was attached to was assigned to 10 days of patrol duty, flying out of Pensacola, Fla. Letters from him ceased about a month ago and while his parents believed he was being transferred abroad, it was not until yesterday that they learned he was in Egypt.

The young man’s father is foundry foreman for the Elgin Manufacturing Co. A brother, Ralph, is employed in a submarine building plant at Vallejo, Calif. A sister, Miss Arlene N. Rakow, is an employe of the Elgin National Watch Co.