Robert Dickinson’s amazing diary, “Servigliano Calling,” contains 34 poems written in camp by Robert’s fellow inmates during World War II. In the weeks ahead we will share all of these poems in individual posts.

This post contains one of the longer poems, “The Alphabet.” 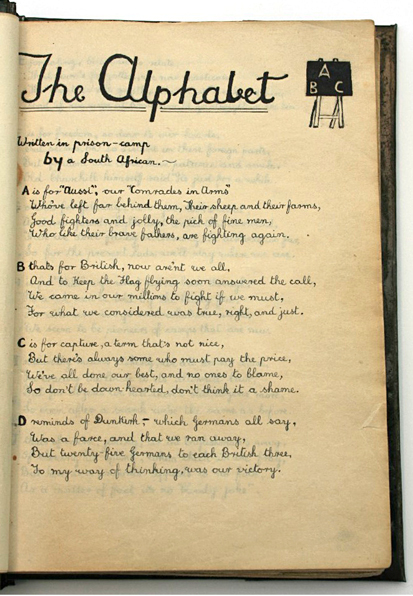 A is for “Aussi”, our “Comrades in Arms”
Who’ve left far behind them, their sheep and their farms.
Good fighters and jolly, the pick of fine men,
Who like their brave fathers are fighting again.

B that’s for British, now aren’t we all,
And to keep the flag flying soon answered the call.
We came in our millions to fight if we must,
For what we considered was true, right, and just.

C is for capture, a term that’s not nice,
But there’s always some who must pay the price,
We’ve all done our best and no ones to blame,
So don’t be downhearted, don’t think it a shame.

D reminds of Dunkirk, which all Germans say,
Was a farce, and that we ran away.
But twenty five Germans to each British three,
To my way of thinking, was our victory.

E is for eating, but sad to relate,
That term’s forgotten, we now masticate.
The meats is all gristly, the soups weak and thin,
And if we were at home, would go straight in the bin.

F is for freedom, so dear to our hearts,
But seems Oh! So distant in these foreign parts.
But freedom will come, have patience and smile,
Old Churchill himself said “its just for a while”.

G stands for getaway, now you look around,
And see guards, lights and walls that surround.
Then we don’t fancy swimming, the distance too far,
So for the present lads, we’ll stay where we are.

H is for “Hell” my! What we’ve been through,
It’s a tale can be told by the lucky few.
For wherever we go and whatever we do,
We seem to be prisoners of camps that are new.

I naturally means itching, we all do our share,
In tracing the louse to its ultimate lair.
But for dozens we kill, there’s still dozens more,
So after a search we’re the same as before.

J that’s of course, jesting. It’s an Englishman’s way,
Of showing his spunk, when thick in the fray.
But here as a prisoner appeals to no folk,
As a matter of fact it’s no “bloody joke”

K is for kisses, those last from our folk,
Are fresh in our memory, and hard on a bloke.
But an appointment with Gerry, each one of us had,
And to those of us here now, “it’s not yet m’lad”.

L is for leisure, our life here’s sublime,
Except when our parcels are not here on time.
But then, we have leisure to curse those we think,
Don’t care a hang! For our hot evening drink.

M is for “macaroni”, once left alone,
But now eaten by all, like a dog with a bone.
The very same fellows, this dish did annoy,
Now greet its appearance with a cry of sheer joy.

N is for Naples, which once we all though,
Was our journeys end, to which we’d been brought.
T’would have been nice, we couldn’t deny,
But then, t’is said, “see Naples and die”.

O that’s for object, we’ve all one in view,
To keep clean and decent, unsullied and true.
So when we return to sweethearts a wives,
We can show prison hasn’t altered our lives.

P is for patience, which prisoners of war,
Will have after a “term”, if not before.
For in every camp to which one goes
It’s sorely tried, as everyone knows.

Q’s surely quagmire, from mud slush and snow,
But for real mud, see Sicily , as most of us know.
We’d walk forward three yards and slip backwards four,
And arrive yesterday for today, or my arithmetic’s poor.

R is for rest, which we are having at last,
As working’s now a thing of the past.
No longer with shovel and pick in hand,
Do we hack camp-sites in Sicily’s land.

S now is sabotage, everybody’s aim,
If given the chance to spoil Jerry’s game.
For every “spanner” into the works you throw,
Shortens our stay “inside” a little you know

T is for treason, and some of us said,
We had been sold, and sooner be dead.
Be we are just pawns in this game of war,
And pawns go first; of that I am sure.

U is for U-Boat, called submarine too,
On our trip over, Alas!, none were in view. .

We prayed for re-capture, the reason is clear,
For freedom or death, was preferred to here

V now’s for victory, with Jerry “nonest”
And peace and reality, our longings at rest.
The end of all horrors, of pain, and of war,
Which Fritz had started; be sure never more.

W’s for wages, the word seems so funny,
For who expects a prisoner to be paid money.
Cheese, biscuits and jam at the canteen were sold,
And long were the queues for this precious gold.

X is for X-ray, old nasty looks through,
Microsopes, telescopes and periscopes, too
Lets hope all give a distorted view,
Of Danzig, Moscow and Mersa Matru.

Y’s for yesterdays, our tomorrows are near,
And with them all things we hold sweet and dear.
We won’t be here long, boys, take it from me,
I’m no Jeremiah, but that’s my prophecy.

Z is the last, for zest and for zeal,
We again shall apply to our jobs, when they’re real.
So hurry on peace, and bring back again,
The old life we knew, in a world that was sane.