The three-page letter featured in this post was sent to me by R. J. McMahon’s daughter Linda Vaness. On receiving his WW II service medals, R. J. realized he qualified for one additional honor—an Italian Campaign Star.

This letter explains his justification for receiving the Star. As the text is written longhand in a single block, I’ve taken the liberty of dividing it into paragraphs for ease of reading.

I asked Linda if, in response to the letter, her father had received the campaign medal.

“Yes, Dad did get the Italian Star,” She replied. “We have had all of his medals set into a special jarrah (Western Australian hardwood) frame and his grandson has inherited them.” 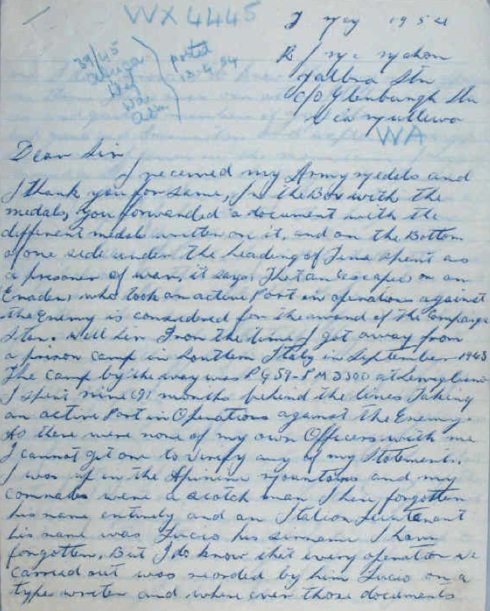 I received my Army medals and I thank you for same. In the box with the medals you forwarded a document with the different medals written on it and on the bottom of one side under the heading of time spent as a prisoner of war, it says, that an escapee or evader who took part in operations against the enemy is considered for the award of the Campaign Star.

Well, sir, from the time I got away from a prison camp in southern Italy in September 1943—the camp, by the way, was PG 59–PM 3300 at Servigliano—I spent nine (9) months behind the lines taking an active part in operations against the enemy. As there were none of my own officers with me I cannot get one to verify any of my statements.

I was up in the Apennine Mountains and my comrades were a Scotch man, I have forgotten his name entirely, and an Italian Lieutenant, his name was Lucio, his surname I have forgotten. But I do know that every operation carried out was recorded by him, Lucio, on a typewriter and where ever those documents are I don’t know. I do know that my name appeared on them. There was one other Italian with us and quite a number of Yugoslavs. We had guns and ammunition and explosives dropped by our own planes in the mountains. I myself carried a Sten gun and also my Scotch friend. The only thing I have of my scotch friend is a photograph of his sister that he gave me.

When we finally got relieved it was at a place called Petriola by a Polish Batt and they took us to their unit headquarters and put us in the clink with the other prisoners of war and they classed us as German spies and between you and me we had to talk. They were not convinced with my pay book as it was only a duplicate therefore it had no photo of myself in it. The Poles were convinced later by a British Intelligence Officer that we were genuine and so we were taken to a camp in Naples on the first step on our way home.

Well, Sir, that is my story. I have not told you of any of the patrols I went on, all carried out at night such as blowing up bridges and railway lines and embankments. It was nothing to walk up to 45 kilometres in one night and be back in the mountains by morning. I had some very narrow escapes behind the lines and I never want to go through it again. The Scotch man and I and the Lieutenant Lucio were caught in an open field on one occasion when we ventured out in the daytime.

By the way, there is a lot more to this operation than I am writing about and it would fill a lot more pages and I haven’t got the paper to write on. We were riding donkeys and we got caught in a machine gun barrage. The Scotch man’s donkey was shot dead from under him. So myself and the Italian decided to get off and run as we thought we could make better time than the donks. Boy, and when we were running the bullets really came at us. I don’t think John Landy would have been in the race with us. However we got through OK.

Well, Sir, there it is. I have no officer to verify this as there were no British or Australian Officers with us. 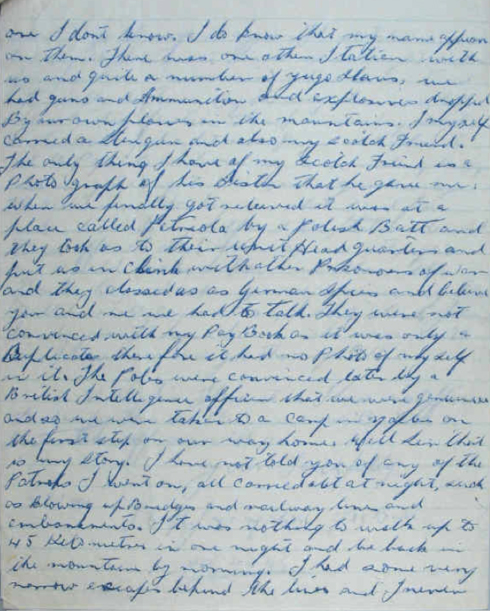